Wednesday, April 29, 2009
RT Wrap Up At the end of the blog, I’ll post some pics taken last week at the RT conference. I’m still in recovery mode, but there were a few interesting things happening in the real world while I was gone.

First, Stephanie Meyer appears to have been ejected from the Deseret Book store chain.

Deseret Book…has decided that Meyer's best-selling vampire romance books will no longer see the light of day -- at least on the shelves of its chain stores. Customers may instead request Meyer's 2005 novel Twilight -- or its three companion volumes, New Moon , Eclipse and Breaking Dawn -- by special order for either store pick-up or delivery by mail.

"We're never really given a reason for these things," said Steve Hartvigsen, manager of the Deseret Book store at Valley Fair Mall. "We just get a return sheet and send books back."

Deseret Books is owned by The Church of Jesus Christ of Latter-day Saints and Meyer is a member.

From WhedonInfo.com: Joss Whedon, who directed and was a co-creator, recently told reporters at the Paley Festival in Hollywood that (a Dr. Horrible) sequel could take any number of formats, including an online series or possibly a feature film.

And more here from an article in the Chicago Tribune.

My fave (and yours) James Marsters talking comics:

“I thought that if I wrote a comic, I’d have ultimate power over everything,” said Marsters. “It was a rude awakening to find out how little power writers have.”

The real bone of contention was with Dark Horse’s choice of artist Keith Barnett, who drew everything in a dark, gothic style that, while he liked the art, Marsters insists just wasn’t right for his story.

“[He] drew it in a real Goth style that made [Spike and Dru] both look feral and ugly,” explained Marsters. “I thought that was kind of cool for me, but Juliette Landau didn’t write this and didn’t want her character drawn like a hideous beast… This is a twisted romance. This is not a gothic thing. And in romance, the leads have to be romantic. They have to be characters that the audience wants to kiss.”

Anybody seen the comic? I haven’t so I can’t comment.

We extracted about 75 percent of the responses on age (representing about 700 responses, taking equally from the earliest and most recent postings, which show very similar age distributions). Per John Makinson's quip at an LBF panel, over half of reporting Kindle owners are 50 or older, and 70 percent are 40 or older. Here is the full age bracket distribution:

Full article is on the Amazon site. So much for the new technology attracting only the young.

Remember when I mentioned Mario and I have a basket in the Brenda Novak auction. Here’s the direct link —look at all the goodies! 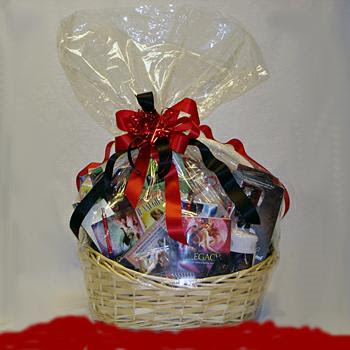 Before we head to RT, a pic from Horrorfest—friend Dawn Anderson is the zombie! 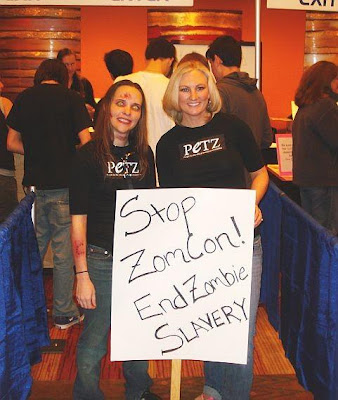 Off to breakfast at the world's biggest McDonalds! No joke, btw. 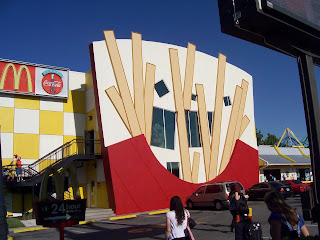 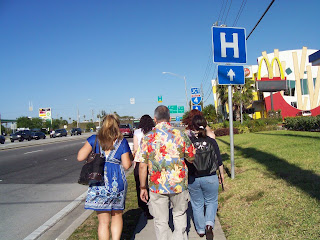 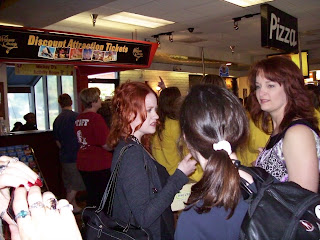 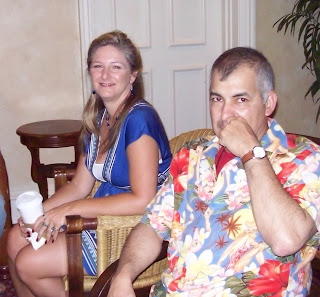 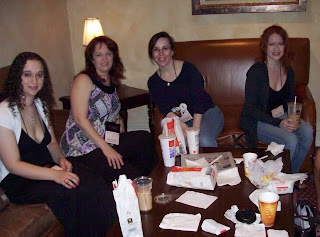 Blake, whose last name I can't remember (profuse apologies), Diana Rowland, Jackie Kessler and Richelle Mead, Lucienne Diver and he who shall be nameless 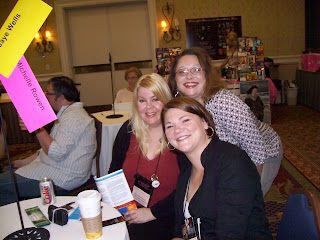 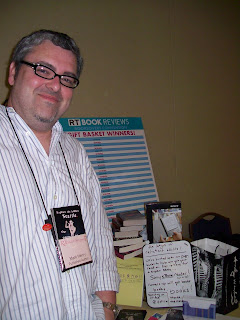 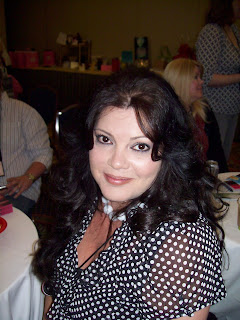 Fearless leader of the League of Reluctant Adults: Mark Henry standing in front of the stash we offered as a raffle prize in Club RT 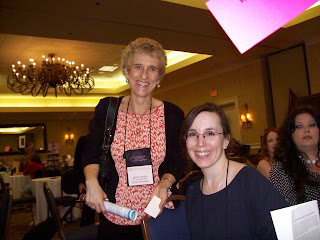 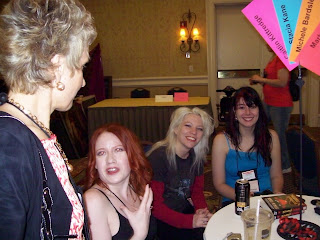 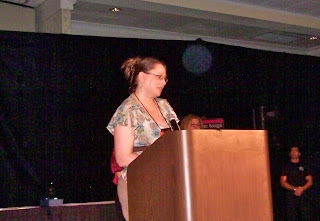 Michele Bardsley on stage accepting her Reviewer’s Choice Award for Best Vampire Romance, Because Your Vampire Said So 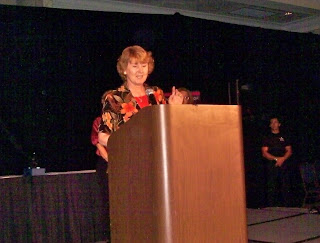 And last, me accepting my award for Best Urban Fantasy Protagonist, Anna Strong from Legacy. What a rush!!!

And if the pics aren't enough, RT interviewed me here and Jackie Kessler put together a charming little ditty to commemorate the festivities here.

Now, two down, one to go. This weekend is the Colorado Romance Writers Romancing the Rockies Con--panels and signing. Then just maybe next month I can do some writing.  ¶ posted by Jeanne Stein @ 4:40 PM

Comments:
Now where did I see a photo of Mario being a "college hunk hauling junk"... ;-)

Congrats Jeanne! We all knew Anna rocks, it's good that the world is waking up to it.

I'm glad you and Mario had a good time.

Tez, believe me, Mario was NEVER a college hunk...

Hi Gina-- it was fun but exhausting, especially following right after Horrorfest. This doesn't happen too often, one con right after another, and I love meeting everyone (like you) but I'm ready for a break! As I said, I really need to get some work done!

I completely understand! Being my introvert self I'd be ready to go fetal right about now. No more people! nooooo....

At least you get to be close to home again this weekend and hopefully we won't have a massive slush storm.

Re Kindle. I do understand these stats and why it's primary adopters are older:

1. Who has the money to fork over for one of these things? You CAN buy a cheap mp3 player. You can't buy a cheaper ebook reader.

2. Which demographic is more inclined to be reader-heavy?

3. Lets face it. All us 40-somethings still are dreaming about life in Kirk's Federation. We want our tricorders, dammit. Or Ensign Rand trailing behind us with her fancy recorder. Or maybe Checkov if you'd rather have the hunky guy assistant instead of the bombshell blond.

4. Who provided the vision for all this tech anyway? Uh huh -- those of us getting gray.

Good points all, Gina--especially #3--except it was Spock I wanted to trail after. Go figure....

Oh, yes...me too...I'd trail after Spock in a heartbeat. But I'd lead Checkov around and make him do my errands.

Looks like everyone was having a lot fun. Congrats on the award for Best Urban Fantasy Protagonist on Anna. She is one of my favorite UF characters. Woot! And I can't wait for Retribution to release.

Can't wait for the new ST-- counting down the days--

Fantasy Dreamer, thank you. Truth be told, I think (hope) Retribution will be the best one yet.

Careful what you say Jeanne. I have incriminating pictures.

Wasn't Mario a military pilot? They are usually pretty hunky in their day.

"In their day" is the relevant phrase.

Hi Jeanne! RT looked so much fun. I am quite jealous. Sigh. One day. Are you by chance going to the RWA national conference in DC in July? I won my chapters scholarship and am super stoked...at the very least to take the "Lessons from the Firefly" class.

Just got caught up on dollhouse on hulu. Didn;t see last nights on TV because it's not "tot appropriate" so i wathed it today while she watched "spy kids" (again, groan). Man the ending was stong. Do you know if that's the finale or is there more to some...

The tot says hello. She wants to know ifr Anna is going to buy herself a present for her win (in her opinion shoes alwasy work, lol).

Have a super fab day.

Hi Suzanne: You asked: Do you know if that's the finale or is there more to some...

One more this week and it's been announced as "season" finale rather than "series" finale so it gives me hope that it will be back.

Tell the tot that Anna hasn't had time yet to go shopping. But she'll keep the shoe idea in mind!!

The tot sounds like she's quite the little lady. :)

The tot is a princess, for sure!

Congrats on your award! That is totally deserved. Even if I am biased.

thanks for sharing the lovely pictures.

Do you know the comic James MArsters was talking about? (the link won't work for me .. again. Maybe thre is something wrong with my comp. If i know the title I can look for it next time I'm at the comic shop. (I was just there too .. but I could pop in over the weekend and look.)

I finally got the link to work (it was adding an extra space after the address which translated as .html%20)

While I buy the Buffy comics I have only read the first volume of the Angel comics (After the Fall) and it is quite clear that the Angel comics have a much darker edge to them artistically. I have not seen Dru yet, but Spike was pretty rugged looking in the "I can tear out your throat any minute I like" type way. While I like the Buffy Comics for the most part, I'm not entirely certain I like what I've read of the Angel one. It has less to do with the artist style, and more to do with the blocking of that vignettes within the page. (Frames? Sorry I took a Bande Dessinée class in France one time and it has screwed up all my terminology.) The flow of the Angel comics is not as fluid as I would like, but the art is indeed rather gothic-ish in style. It is clearly designed for people that are into the gritty nature of Angel and not so much for those that were there for the eye candy - unless you are a guy and like comic chicks with big boobs. In that case Spike had what appeared to be a harem of sorts with plenty of those girls to go around.

Leia said: The flow of the Angel comics is not as fluid as I would like, but the art is indeed rather gothic-ish in style. It is clearly designed for people that are into the gritty nature of Angel and not so much for those that were there for the eye candy

You nailed it. I haven't caught up with everything yet, but the comics are definitely more dark than light.