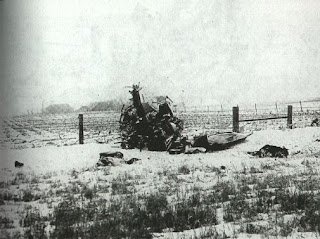 A long, long time ago...
I can still remember
How that music used to make me smile.
And I knew if I had my chance
That I could make those people dance
And, maybe, they'd be happy for a while.

But February made me shiver
With every paper I'd deliver.
Bad news on the doorstep;
I couldn't take one more step.

I can't remember if I cried
When I read about his widowed bride,
But something touched me deep inside
The day the music died.

Oh, and there we were all in one place,
A generation lost in space
With no time left to start again.
So come on: jack be nimble, jack be quick!
Jack Flash sat on a candlestick
Cause fire is the devil's only friend.

Oh, and as I watched him on the stage
My hands were clenched in fists of rage.
No angel born in hell
Could break that satan's spell.
And as the flames climbed high into the night
To light the sacrificial rite,
I saw satan laughing with delight
The day the music died.

Fifty years ago on Feb. 3, Richie Valens, The Big Bopper and Buddy Holly were killed in a plane crash. FIFTY years ago. I love Don McLean’s lyrics.

In more cheerful news, looking for freebies? Harlequin is giving romance readers a Valentine’s gift—free downloads of some ebooks. Go here to check it out.

By now, everybody knows about the miraculous landing of US Airways Flight 1549—From Shelf Awareness: Perhaps because he had other things on his mind at the time, the pilot of US Airways Flight 1549 lost a library book when his plane crashed in the Hudson River earlier this month. Extra TV reported that when he called to report the loss, the Fresno State Library not only waived his lost book fee, but "also dedicated a replacement copy to heroic Captain Chesley 'Sully' Sullenberger! It gets better--the book was about ethics!"

This guy is a hero in every sense of the word. I’m sure there’ll be a book deal down the line if there isn’t already.

The next Amazon Breakthrough Novel Contest is open until this Saturday. The winner of the contest receives a publishing contract with Penguin Group and a $25,000 advance.

Mario and I are now part of The League of Reluctant Adults—sure to be some fun in store with this one. Check it out here. In the next couple of days, Mario and I will post our intros.

And from last week-- thanks to everyone at Cuyamaca College for hosting me. It was a very enthusiastic audience and I appreciated the invitation. A couple of photos of the event-- 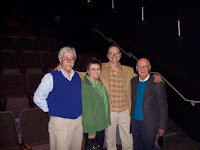 A group shot of some of my favorite people-- my cousin Ed Cline who is a prof at the college, my wonderful sister, Connie Cline, my best bud, Ron Jessee, and last but not least, my 89 year old uncle George Farineau. 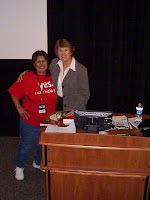 Me, at the podium, looking far more confident than I felt! 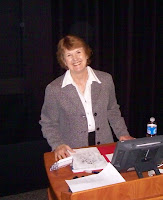 Reine Perry, representative of the campus bookstore.  ¶ posted by Jeanne Stein @ 9:12 AM

Ha ha, Mario-- But you should check it out. Probably the only action you're likely to get in awhile....

1. Are you planning to continue this blog in addition to the League blog?

2. Jeanne, I saw a plush (stuffed:)) Spike today at NY Comic Con and thought of you!!! I'll see what other goodies they have tomorrow when I have more time to explore.
Hugs, Krystn

Hi Krystn-- OMG a PLUSH Spike??? How cool is that!

And i don't understand yet how th LRA is going to work. I think I heard something about the blogs being posted both place? I've got to check it out--just haven't had time yet.

Hope you're having fun at Comic Con. Is Joss attending this year?

Oh -- I hope the LRA thing doesn't change this blog.

Not to worry, Gina-- I don't intend to stop and I don't think Mario does either.

Jeanne, yes Joss is attending. He'll be there tomorrow, but tickets for that are only available by lottery. I don't think I'll make it there early enough for a ticket. Obviously, it is THE ticket to have. NYCC has been a blast so far. Wish you were there/here. Hugs. Krystn
PS. I thought you already had a Spike plushie. Hmmm. Someone does; just can't remember who.

Krystn-- No, no plushie. I do have a Spike action figure and a Spike puppet-- okay, okay, I know how that sounds.

If it's not too late, though, you should enter the lottery. You just never know!!!

Give us a report when you get back and we'll post it on the blog, okay?

Jeanne, I sent you an email with more info about NY Comic Con. Now I wish I had grabbed that Spike Plushie. I probably could have traded it for an ARC ;).
Krystn