What I'm reading: After The Golden Age by Carrie Vaughn. 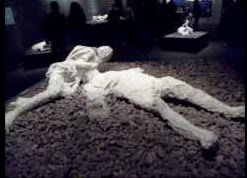 Trust that everyone had a great Thanksgiving, from the T-day dinner through the weekend festivities. I had family from out of town. We dragged our turkey-stuffed behinds to the Pompeii exhibit at the Denver Museum of Nature and Science. An awesome and thoughtful hour-by-hour telling of the volcanic destruction of a thriving Roman city. The Apocalypse is a popular subject in modern literature, and after viewing this exhibit, end-of-the-world stories don't come close to capturing the pathos and horror of reality. No zombies in this cataclysm but plenty of plaster casts of the dead caught in the final throes of life. Many died comforting one another. Truly poignant and disturbing.

Afterwards, we watched Argo--the best movie I've seen all year. Exciting, spine-tingling suspense, terrific dialog, some good humor, and plenty of great story-telling. The movie does an excellent job explaining the background to the Iranian revolution that led to the American hostage crisis. Plenty of theatrical touches that put you back in 1979-1980. The hair (porn staches), the clothes (the men wore plaid blazers--not a black suit or power tie in sight), the clunky electronics, teletypes (with that super-cool rapid-fire printing that told you something dramatic is about to happen!). There wasn't a weak character in the cast though John Goodman and Alan Arkin practically stole the show. Ben Affleck played an appropriately cool and understated hero, the real-life Tony Mendez. Bryan Cranston chewed the carpet (this guy is everywhere).

Comments:
I'm so excited to see the Pompeii exhibit. The thought of being actually frozen in time like that. It's amazing (probably not for those poor people) but still...

And reading Carrie Vaughn, this is some great week for you :)

Julie: Thanks for dropping by.
Jeanne: I'll put Van Gogh on my to-do list.