I've been reading a lot of novels lately in a variety of genres as I try to pin down what makes a good read "good."

What complicates the process is what we determine as "good" is so subjective. Almost all of what I've read lately is not just good, but damn good. Humbling good. Among the titles:

Thread of Hope, by Jeff Shelby

The Financial Lives of the Poets, by Jess Walter

Consent to Kill, by Vince Flynn

In Pharaoh's Army, by Tobias Wolf (a memoir)

Then just this weekend I finished (more or less) one book that screwed my mood. The novel was by an award-winning author--recipient of an NEA grant and a Guggenheim Fellowship--and featured lost love and a man scarred by war. With those credentials, I was expecting to be blown away. What could go wrong? Plenty, unfortunately. The narrative read like a first draft. The author was blurbed by the usual suspects and the book's Kirkus Starred review praised it for "extraordinary language." I must have missed something or read a different book by the same title. Jess Walter and Tobias Wolf ka-powed me with their mastery of prose. For a literary writer, the guy in question was a lazy hack.

In another blog exploring the magical sprouting of a breakout book, an agent was quoted as saying, "and then God smiled." In other words, "a miracle occurred." I don't want to slight another author for their success--bad karma and all that--and if someone hits the jackpot, good luck to them.

Still, I wish God wasn't so stingy with his smiles. I know of plenty of good great outstanding writers who have not been given the attention they deserve. Meanwhile, other less talented scribes get heaped with praise and sales. We have the hoopla over Shades of Grey. What puzzles me is all the media carnival about the sexual content, as if no one else had ever written erotica before. Well, here's a nod and a wave of the stinky finger to my naughty and successful writer pals, Lorelei James, Lauren Dane, and Megan Hart. 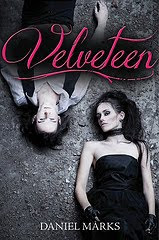 And this week, on October 9 to be precise, is the release date for Daniel Marks' (