Wednesday, October 03, 2012
A House For Sale and a Contest or Two On my way to Fairplay to write, write, write this weekend. Thought I'd share some goodies I came across this week that may be of interest.

Have an extra 2.25 million pounds laying around? If so, you can buy the house where Harry Potter was written. Go here for more photos. 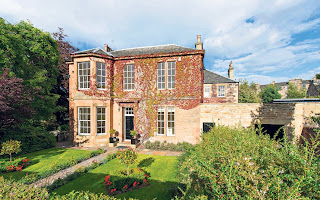 I just purchased The Casual Vacancy but it will be awhile I'm afraid before I get to it. Anyone read it yet? What did you think?

Harlequin’s Love Inspired Romantic Suspense line is looking for authors. To find them, the editors are hosting a Fast Track submission process during October. Submit your first chapter and synopsis and get a read in one month. Send your first chapter, two-page synopsis, and a query letter stating how much of the manuscript is complete to LISfasttrack@harlequin.ca between October 15 and October 26. You’ll have a reply by November 26. Love Inspired Suspense features romantic suspense with a Christian faith element. Stories are equal parts romance and compelling suspense, with a faith message woven in. Completed books are 55,000 to 60,000 words. Find more details about the Fast Track Submissions here.

What are publishers buying right now? This dovetails nicely with the above.  From Publisher's Marketplace:

In September there was...A surge in fiction, driven by romance & women's fiction (which doubled). September fiction was up 25 percent from last year, the highest total ever for this month. Similarly, domestic fiction sales are up 23 percent for the year-to-date...

...As far as reported sizable advances, six-figure fiction deals have also bounced back--driven by that surge in romance. Five of the major deals were women's fiction (none were last year), in multi-books deals, as were three of the significant deals. So far we have logged only two six-figure debuts, which drives a lot of the talk and impressions. (This time last year it was M.L. Stedman's now-NYT bestseller THE LIGHT BETWEEN OCEANS and Rachel Joyce's THE UNLIKELY PILGRIMAGE OF HAROLD FRY leading the bid-for debuts).

And another contest which has a nice $5000 grand prize. This was posted on a RMFW loop by Mark Stevens:

America's Next Author is a huge writing contest with a $5000 grand prize, and is now accepting entries. But more importantly, it's built around a very unique concept: all contest entries will be visible to the public and the winner will be chosen by voters and our panel of judges.

Readers will be able to comment on stories, give feedback to authors, and vote for their favorites. This gives authors a great opportunity to get feedback on their work and build an online following. It's also much more fun and exciting because in regular writing contests, only the winning stories are shown and nobody else ever finds out why they didn't win.

The competition will have eight nomination rounds. Each week, the top-ranked author will be nominated for the finals. And even if a story isn't nominated, it will remain in the contest and have another chance to be nominated each week. During this process, authors can increase their chances of winning by getting everyone they know to vote for their story.

In addition to being read by the public, the contest entries will be judged by a panel of experienced professionals from the publishing industry. These judges will read entries and provide feedback to authors. They will also nominate four additional wildcard authors, adding them into the final rounds of competition.

After the debacle last week with the pictures I tried to post,  I've given up the idea of posting anymore about the Writers Police Academy. But fellow writer Terry Odell who obviously has a better grip on the vagaries of blog posting has done a wonderful series here .  So if you'd like to see and find out more, check it out.  I'll try with just one more because I loved getting my pic taken with Lee Child. 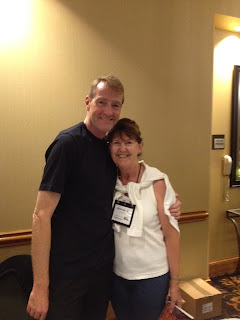 Comments:
Wheh-- looks like it went all right this time! :-)