As a writer I tell wanna-be scribes to read...a lot. And deciding that it would be a good idea to follow my own advice, last year I had promised that I would read a book a week. Recently I tried a little contest to test my reading tastes by comparing genre versus literary.

In this corner, the genre heavyweight:

Consent to Kill by Vince Flynn. Years ago I had met Vince Flynn at the Men of Mystery con in Orange County, CA. I didn't have a chance to talk with him during the con as he was mobbed by fans. Then by chance, he and I were near the same gate for our flights home. He turned out to be very friendly and approachable. And very tall. Flynn is famous for his hard-driving potboiler political thrillers and you can't get more genre than him.

Consent is from Flynn's Mitch Rapp CIA super agent books. I chose this book because I wanted to see how Flynn handled backstory in a story from the middle of a series, and I wanted to analyze his writing style.

After a couple of chapters of setup, the plot gets into gear when an Arab billionaire petitions a Saudi prince to assassinate Mitch Rapp as punishment for killing the Arab's son (who had been targeted by the Americans for being a terrorist). The prince contacts an ex-Stasi agent who in turn hires a hit team--a former French Legionnaire officer and his girlfriend. The villains know that Mitch Rapp is the most dangerous of all prey, and if they botch his murder, he will ruthlessly hunt them all.

Whenever I read a novel I have to work to turn off my critique filter, but there was little trouble doing that in this book. Flynn's prose is uncomplicated and direct, and I couldn't find one example of what writing coach Margie Lawson calls a NYT bestselling phrase.

"It's all about story. Everything else is technique." Diana Gabaldon

Flynn delivered a well-crafted tale that forced me to keep the book handy so I could get to the story at every chance. At first, Mitch Rapp struck me as Batman without the cape. But Flynn knocked the props from under Rapp and about took everything from him. Once the villains heard that Rapp was dead (a planted rumor) they began to double-cross each other, then switched course when they discovered Rapp was alive. Rapp and the CIA tightened the screws in a way that made me cheer but Flynn is too clever of a storyteller to give the reader a predictable ending. This finale involved a surprising twist yet remained true to Rapp's character.

In this corner, the literary middleweight:

The Financial Lives of the Poets by Jess Walter. I don't mean to imply that Walter lacks any talent when compared to Flynn. It's that Walter hasn't hit it as commercially big as Flynn.

Though Walter is described as a literary mystery writer, he has won an Edgar from the Mystery Writers of America for Best Novel for Citizen Vince.

The hero in this book is Matt Prior, an unemployed journalist facing foreclosure. He and his wife are ass deep in debt and she's started an affair with someone she's met on Facebook. His live-in senile dad lost everything to a thieving stripper and her boyfriend. Matt's money troubles began when he bankrolled an Internet start-up that offered financial advice in poetic form. He befriends some slackers, scores pot, sells it for a nice profit, and decides he's found the way out of his quagmire.

What carries the narrative is Walter's witty prose, a hallmark of a literary read. Here are a couple of examples:

"The clouds hung low, like a drop ceiling suffused with light from the city."

Matt's appointment with his financial advisor is described:

"The appointment is a predictable as coffin shopping."

The story is a catalog of fresh literary gems. But as the plot unfolds, the narrative veers into mystery genre with a scene as hard-boiled and tense as anything from Breaking Bad.

If Walter's writing chops aren't enough to stoke my envy, this book is being adapted into The Bailout starring Jack Black. Consent is also in movie development.

So what's the verdict? Sorry, but it's a tie. 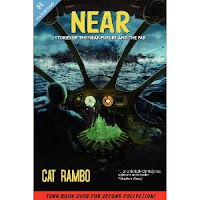 Writer pal Cat Rambo has a collection of science fiction short stories out, Near + Far. Do yourself a favor and treat your mind to this book. It'll be like a brain massage with a happy ending.