Thank you Jeanne for covering for me last week. I was deep in the process of moving into new digs.

Years ago I had moved into Five Points, an area infamous in Denver for crime and urban decay. My son needed to move in with me and besides needing more room, my place at the time didn't allow for pets. So I rented a row house apartment in the 'hood. Little did I know that this temporary layover would last six years. 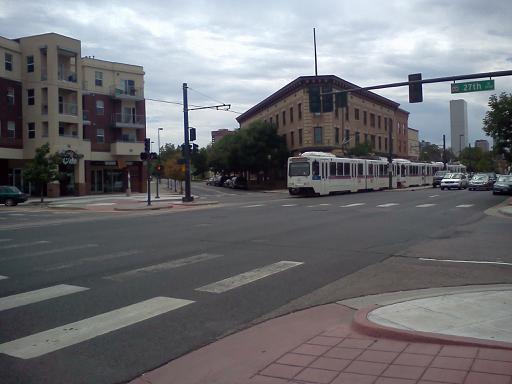 The epicenter: Five Points, at the corners of 26th, 27th, Welton, and Washington Streets.
Officially, the neighborhood is known as Curtis Park and is the oldest "suburb" of Denver, construction having started here in the late 1870's for a community of middle class workers and the city's nouveau riche.

Sadly, Curtis Park fell into neglect in the late 1910's when the wealthier residents migrated to the tonier environs of Capitol Hill. Year by year, the base income dropped. Segregation corralled African-Americans along Welton Street and northward. Redlining limited home loans which choked the flow of money needed for upkeep. Misguided attempts by the city at development flattened blocks of historic homes.


Ironically, what saved Five Points was neglect. This part of town had such a seedy reputation that for decades no one wanted to live here, and that spared Curtis Park from the infestation of McMansions.

Despite recent gentrification, Five Points retains its gritty urban feel. The "Jesus Saves" rescue mission is blocks away, a hobo camp at Lawson Park (next to a popular softball field), and itinerant day laborers put you shoulder-to-shoulder with the down-and-out. Party goers flock to the nightclubs on Welton Street and in the mornings you'd find the sidewalks and curbs littered with show flyers and broken bottles of booze (and the occasional condom). Graffiti appeared like herpes and alley Dumpsters were jammed with piles of cheap, broken furniture. I'd been propositioned by hookers at 2PM right in front of my stoop. (I politely declined.) You learned to blank out the many pan handlers.


Over time, I began to appreciate the neighborhood and its urban vibe. The closest Light Rail stop was only two blocks away. We could walk to Coors Field and LoDo. How cool was that? My favorite urban hike included chichi 17th Avenue through Uptown. Trendy bars and hipster coffee shops mushroomed all around us. While we had our share of ghetto hood rats, they never bothered us. The nearby Safeway--nicknamed the Not-So-Safeway-- was remodeled and the clerks took care to go out of their way to greet me. One even came around her counter to give me a good-bye hug when I mentioned that I was moving away. 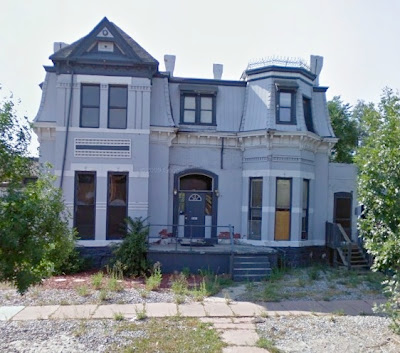 There was a bit of circularity in my experience here. I had my original author's head shot done by the photographer James Glader, who at the time lived and worked in this wreck of a building, the Mathews-Gotthelf Mansion. Like many of the larger homes in Curtis Park, this house had been sub-divided into apartments. Inside, the building reminded me of the derelict mansion that Tyler Durden lived in as a squatter in Fight Club. Then Shazamm! a couple of years later, I lived up the street and the mansion is getting a long overdue make-over. 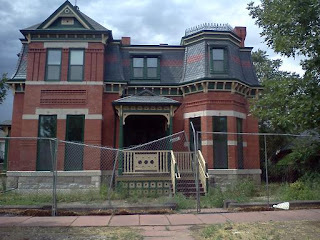 Now I live in the Highlands, a part of Denver almost as old as Curtis Park. It's a homogenous neighborhood, mostly couples in their early-thirties with young children. Old, tall trees shade the narrow streets. Curtains of ivy and lush flower gardens decorate the houses. Though we live a block from a major thoroughfare, it remains much quieter than Five Points, where ambulance and police sirens were more common than the chirping of birds. No one scavenges our alley trash. There are no crazy people yelling at the corner or couples screaming insults. None of Five Points' character. I miss that 'hood.

Mario, I know all of those places! I recently moved from the Baker's district off of Broadway to a more sedate Park Hill. But I really miss the sound of trains at night. I can barely hear them from here.

Hi Mario
Moving is a challenge. We now live in Lakewood. It is different from Thornton and I'm doing my best to find all the new stores. Your new place sounds wonderful.
Best of luck.
Nancy

Thanks all for your comments. Housewarming party? Stay tuned. The loudest sounds in my new hood are the lawn mowers :(

Welcome to Highlands, Mario. We have our own character...it's just not Five Points.

And I, single female, can pretty much walk out and about at all times of night.

Highlands was ghetto when my dad moved there in the early 1970's, especially the 32nd and Lowell intersection that I now refer to as "mini-Boulder."

Anyhoo, congrats on your new digs. Plus, I'm with Bets -- I'll bring the tequila! ;)