If you're of those who hasn't yet seen Prometheus, count yourself lucky. I could go on and on about why it was such a mess, but go google the reviews and take your pick.

It's ironic and unfair that the critics heaped so much scorn on John Carter when its plot made a lot more sense than Prometheus'. 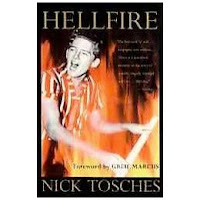 Closer to home, I've been reading nonfiction books as research for a freelance project. One recommended book was Hellfire by Nick Tosches, the story of The Killer, Jerry Lee Lewis. It's a very American Southern tale, what with Lewis marrying his cousin and other girls in their mid-teens, moonshine, pills, loose women, speaking in tongues, guns, his run-ins with the law, his son drowning in the family swimming pool, setting his piano on fire, more loose women, Elvis, and most fascinating of all, playing Iago in a rockabilly presentation of Othello, to critical acclaim and much success.

That video is interesting but you don't get a sense of Lewis' wild charisma. Try this for some hard rockin' 60s headbanging:

We've got reason to cheer one of our own. The Broadway Book Mall hosted Beth Groundwater's signing for her latest novel, Wicked Eddies, which earned a Critic's Pick from Kirkus Book Reviews. Beth called foul when asked if she enjoyed a good paddling. 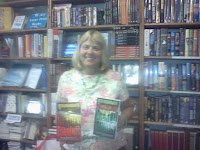 Comments:
I had just posted something about Prometheus on another site and your comment about the movie reinforced my point. I saw John Carter and Prometheus and loved them both. But John Carter, even though it was early science fiction, would more fit into the area of science fantasy today, just like Star Wars and in some respects Star Trek. Prometheus was very hard science fiction. With the exception of hyperlight travel, which has always been pushed to the background in the Alien movies (which, as Scott said, this really was not), every piece of tech shown in the movie was possible in the near future. From my perspective it was a great movie.

Thanks for posting. Maybe the science was close but the characters were idiots.

Have to agree with Doug on this one- I liked Prometheus. And though I guessed early on that Charlize Theron's character had a personal interest in the planet beyond the obvious, I still enjoyed it. I long ago stopped putting much store in reviews.