Jeanne Stein and Samantha Sommersby's FALLEN, a paranormal thriller pitched as combining Without a Trace and Angel, in which an age-old siren partnered with a werewolf join up on a mission of redemption for past sins, to Jessica Wade at NAL, in a two-book deal, by Scott Miller at Trident Media Group.

I speak at several writing conferences and what I've noticed are how many wanna-be writers seem to have the attitude that we published authors are hiding the key to getting published. That this mysterious key will unlock the secrets to getting an agent and editor and securing a coveted deal.

Sadly, there is no key. If one existed, I'd use it to get all my trunk novels on the shelf.

The good news is that those secrets are no secrets at all.

Getting published is a matter of:

The Great Idea: Agents, editors, and readers are always looking for a new story. Granted, there are no new stories, only twists of what's been told. But that's your challenge as a writer. For example, how many dinosaur movies have been made? Land of the Lost. The Valley of Gwangi. One Million Years B.C. What was so different from them and Jurassic Park? Plenty of course, but that's the unique twist. What about vampires? There's a big difference between Twilight and Blade.


Execution: So you've got The Great Idea. Thinking about it keeps you up at night. Now it's a matter of telling your story, and telling it well. This is why most of you come to writing conferences and take writing workshops. To hone your craft. To nail your voice. To discover your style. To remain inspired as you slog through the morass of The Second Act. We know how hard it is to hook an agent and get them to ask for your manuscript. We can't disappoint them, and ourselves, by not delivering a Holy Smokes, my eyes are burning, this is an amazing story.

Persistence: Here is where many wanna-be's fall away. Writing a book involves a lot of time and effort. It takes discipline to do more than sit at the keyboard. Forget waiting for the perfect moment of inspiration. Forget waiting for retirement and typing away at the beach. If it's not killing you now that you're not writing, then you're not a writer. Nobody but you gives a shit if you write your story or not. You've got to hack away at the narrative. Day by day. Sentence by sentence. Pile up tens of thousands of words. And you must stoke this persistence even after countless setbacks. Rejections. Getting your chapters mauled in critique. The distractions of day-to-day life: family, paying bills, traffic tickets, jerkoff neighbors.


Connections: There's a myth that writers are antisocial recluses. Some perhaps, but most of my fellow scribes are exceptionally gregarious and outgoing. Bouchercon is called DebaucherCon for a reason. Get us together over booze, and we cluck like happy chickens. Attending cons is an excellent way to meet agents and editors in person and learn that they're not mysterious creatures. Later, when you query, there's a face attached to your letter, and assuming you made a decent impression, that's one more reason for a yes. Also, with the time-suck of social media, you have to balance between being an annoying Me! Me! pain-in-the-ass, spending hours blabbing on about nothing (when you should be writing), or actually creating a worthwhile presence.


Timing and Luck: I've heard plenty of anecdotes that convince me that there are supernatural forces at work in publishing (some good, some evil). An example of good: a writer submits a story about undead midwives, and the receiving agent will recall a conversation with an editor who said her house is looking for something different in urban fantasy, say, undead midwives? Bingo. Now it's a matter of your execution. But as they say, Fortune favors the prepared. 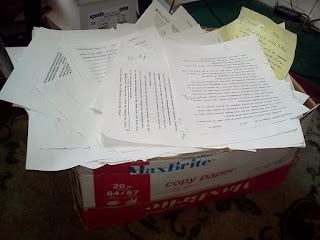 I'm deep in the execution stage of my work-in-progress. At last, I typed THE END to the first draft of my manuscript. Now to connect the Hemingway Bullshit Detector and grind away at the narrative. Here's my recycle box stuffed with revised pages.

I believe the only real keys to writing...are those on a keyboard!

Thanks for commenting! And you are so very correct.

Hemingway Bullshit Detector? I NEED one!

Thanks for the insight, as usual, and congrats to Jeanne and Betsy.

Thanks for saying it like it is. Being friendly, as you are, helps in the business. In the end, every element seems essential. Great job of boiling it down. Karen

I guess it's now official, all right. Thanks for posting the announcement, Mario. And as usual, you've boiled the elements of getting published down into five simple concepts. I agree that Timing and Luck are responsible for more books hitting the shelves than just about anything else. It's exactly what happened when I queried my agent with the Becoming. He has just had lunch with an editor looking for a vampire story. The rest is history...

Chris: Look for one on eBay.
Karen: Once in a while, I manage to learn something.
Jeanne: Can you now hobble around?