I am now an international author. Here is my one foreign title, the translated version of The Nymphos of Rocky Flats, from the Czech republic: 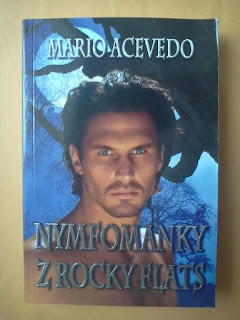 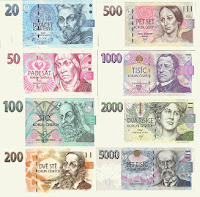 I'll give their art director the benefit of the doubt and assume that this cover resonates with the Czech public and soon my bank account will runneth over with korunas.

Get Smart!
I'll be teaching on online class with the Margie Lawson Writing Academy, this June 4-29, 2012.

Fang It to Me: Writing Vampires, Fantasy, and the How-To's of World-Building. The workshop includes examples and materials prepared especially for this class by some of the top writers in fantasy to include: Carrie Vaughn, Kevin Hearne, Warren Hammond, Jaye Wells, Dakota Cassidy, Carol Berg, Diana Rowland, Stephen Graham Jones, and our own Jeanne Stein.

Though there is a danger your head might explode from so much knowledge.
And for only $30. Sign up here.


If you're jonsing for a dystopian tale of double crosses and murder, Juno is back, in Kop Killer. 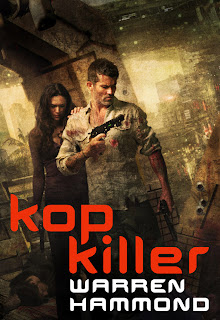 $20.00 members / $30.00 non-members (for adult beverages and snacks). Sure, it ain't free, but the wisdom and entertainment are worth the price: throw in drinks and chow, and it's the best bargain of the summer.

Writing With A Gun to My Head: Jason Heller, Julie Kazimer, moderated by Mario Acevedo

How do you balance creativity against the relentless push of deadline? What is it like to slave at the word count, only to leave your work-in-progress to address a fresh round of revisions from another manuscript? And then the copy edits from another book fall on top of you. Plus you’re expected to blanket social media with promotions for yet another book. Meanwhile, readers demand that whatever you write can’t be anything less than genius. Come listen to why we crazy writers are willing to put that gun to our head.

The world of fiction tends to divide itself into two camps, literary and genre. But how do you tell one from the other? What are their strengths and weaknesses? And, most importantly, if you locked the two of them in a cage and forced them to fight to the death, which would win? Join us for a freewheeling discussion with some of Colorado’s best literary and genre writers.

Comments:
Nymfomanky is my new favourite funny word ;-) Mostly because the meaning of "manky" ;-) http://en.wiktionary.org/wiki/manky

Tez: Manky is my new middle name.
Frank: There is no shortage of mozky here at Biting-Edge.

Be honest. How long have you been waiting to use that blog title ...

Leia: Actually, I was waiting to use: The Czech is in the mail.

Mario: I stand corrected. The second is most certainly better.

nice posting.. thanks for sharing..