Some pimpage before we continue with the programming:

This Thursday, March 22, 7:30PM, at the Tattered Cover LoDo, writer pal and fellow Lighthouse instructor, Nick Arvin, signs his newest book, The Reconstructionist, already an Amazon Best Books picks. Arvin's previous novel, the acclaimed Articles of War, was, among other awards, chosen as One of the Best Books of the Year by Esquire magazine and was the 2007 One Book, One Denver selection. Check out this review in the Denver Post.

Then there's me. Monday, March 26, 6:30-8:30PM, I'll be teaching a free introductory class, Speculative Writing: the Good, the Bad, and the Weird, at the Caste Rock Public Library. The next classes in the series will be Wednesday nights at the Douglas County Library. For info and to enroll, check out The Writing School. 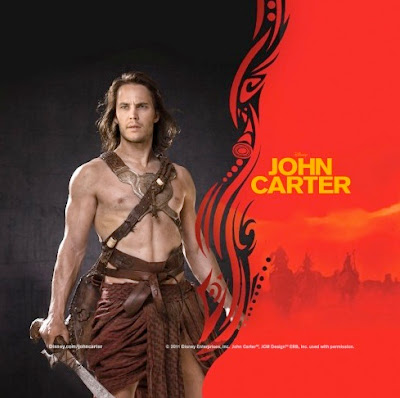 Put the movie John Carter on your must-see list. I went to the theater with a good amount of trepidation as it's based on a story I'm familiar with. I started reading the John Carter of Mars books when I was in junior high and back then thought, these would make awesome movies. So my expectations were high and the film did not disappoint. The screenplay was an amalgam of the plots of the first three books in the series by Edgar Rice Burroughs (A Princess of Mars, The Gods of Mars, The Warlord of Mars--there were ten in all) and smoothed a lot of the rougher edges. One plot device in the books that required a rather huge suspension of disbelief was how John Carter made it to Mars (or as the Martians call their home planet--Barsoom) in the first place. The movie solved that with a neat trick that was easier to accept (involving of course super-magical science).

Dejah Thoris, the Princess of Mars, was played by the veteran actor Lynn Carter, whose

résumé includes Portia in the 2004 movie, The Merchant of Venice, and occasional appearances in True Blood. Dejah Thoris was supposed to be most beautiful woman who ever lived, on Earth or Barsoom, and I'm thinking, yeah right. Well, in this movie, she was...smokin' hot. Brainy. Athletic. Heroic. Plus great legs and cleavage.

Reluctantly, I saw the movie in 3D, a format I don't like. The previous two movies I've seen in 3D, Avatar and one of the Transformers monstrosities, were awful and the dizzying special effects only made the experience worse. This time, the 3D effects were thankfully tame and the movie was good enough not to need them. 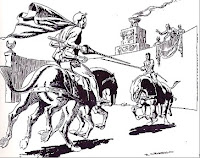 There were some aspects in the movie that differed from what I had imagined, specifically the thoats (Barsoomian eight-legged mounts, which were always depicted in art as more horse-like) and the airships (I loved the ship controls, so very Steampunk). But the sets were magnificent with a beautiful Art Nouveau aesthetic and I'm sure the art directors each busted a nut over the research and concepts. 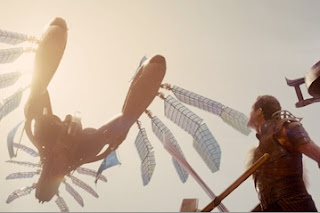 The story line had plenty of twists and a compelling plot. The driver of the story was Dejah Thoris, who has to convince John Carter to help her stop the evil god-like Matai Shang and his minions. John Carter finally agrees, but not to save Barsoom, but because he's in love with Dejah Thoris. (John Carter may be an interplanetary hero but he's also a man.) And John Carter in turn, has to convince the green Tharks to ally themselves with Dejah's cause. And when the story seems all wrapped up, the screenwriters throw in another great twist. And then, another.

If you have any idea of the challenges of acting, even in this age of CGI, check out this behind-the-scenes video of Lynn Carter interacting with Willem Dafoe (Tars Tarkas). Imagine trying to get into the spirit of saving your people from annihilation when walking on dry wall stilts! An interesting detail was that Dafoe's movie rival was played by Thomas Haden Church (of Sideways fame), who also wore stilts. Plus there's a cameo by Bryan Cranston (Breaking Bad).

The main shortcoming of the movie was that we've been here before--a space opera with an intrepid hero on a foreign planet with bizarre creatures and fantastic technology--which is not a fault of the story, which is a hundred years old. In fact, Edgar Rice Burroughs' series was the inspiration for generations of writers and it's just that those other stories (Star Wars, Avatar, etc.,) made it to the screen first. Walt Disney wanted to make A Princess of Mars his first movie but he relented (that distinction went to Snow White) because he felt the movie technology of the time wouldn't do the story justice. Since then, there have been a few attempts, including this forgettable dreck starting Traci Lords (well, she tried).

Comments:
Aaron loved this movie too. I guess I really missed out not reading the novels when I was a kid. I'll have to check it out.

Oh, I hate 3D as well, like, H8 it, but I recently saw Hugo in 3D and just loved it. Can't imagine seeing it any other way.

I tried to do the John Carter trick many times as a child -- just stare at Mars hard enough and you'll just *poof* arrive there. My disappointment was bitter. So I went to the movie with a lot of misgivings and a smuggled bottle of rum just in case it was hideous. (Can anyone say: Wild Wild West?) Rum: Still unopened. The movie was great.

I liked the movie version of Dejah Thoris. She was gorgeous and brave and intelligent, but in the movie she was also a brilliant scientist. She needed to be more than eye candy, and she was.

Plus the comedy within the action was just wonderful. Every since Die Hard I've been waiting for a movie where you're roaring with laughter at the same time your palms are sweating. John Carter did it! I'm so glad they made a great movie. Unfortunately since it has been a designated "flop" there probably won't be any more. But we'll always have this one, and that's enough for me.

Chris: Definitely check it out.
Bonnie: Ack! You stared at Mars too! There is a lot of discussion how Disney flubbed the marketing. I would've emphasized the Dejah Thoris-John Carter romance angle since that is what sets this movie apart from other fantasy flicks. Plus Tars Tarkas dope-slapping John Carter was priceless.

Ok, you talked me into it. Now I have to see the movie & FIND the books. thanks:)