Last week at GalaxyFest, I was on a panel discussing writing horror and what scared us. I offered my definition of horror, which is based on what Tom Monteleone had once said at a Bram Stoker Award's dinner. "Horror is meant to creep you out. Give you the chills. Raise the hair on the back of your neck."

The other panelists recited what scared them. Such as the inevitable zombie outbreak. Or vampires--not that they believed in undead bloodsuckers, just the idea of such monsters.

When it was my turn, I said that supernatural creatures didn't scare me because I don't put stock in any of them. Revenants. Or werewolves. Demons. Dragons.

What does terrify me belongs firmly in the ordinary world. For example, not having the scratch to pay the rent. I've never seen a zombie but I have seen an eviction or two. Down the street, a neighbor was evicted. A deputy sheriff taped the obligatory notice on the door. A few days later, the deputies returned and supervised the ransacking of the home. All the belongings were piled on the front lawn and sidewalk. Though a lot of homeless pass by, no one ever picked through the piles of discards, as if the stuff was jinxed. The most poignant articles left behind were the photo albums, a visual record of better times and misplaced hope, now abandoned to ruin.

Kids. If you have children--and even after they've grown--there's that twitch of worry when they're out and the phone rings at 2AM. 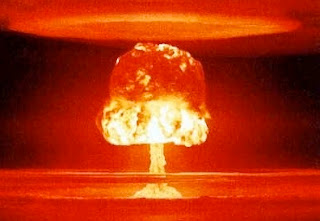 Our friend, the A-Bomb. What frightened me most as a kid was the specter of nuclear war. Freddie Krueger. Dracula. The Wolfman. Movie monsters. Bah! But my dad brought home Civil Defense pamphlets advising what to do in case of atomic attack. That was our own government saying: "Get ready to get radiated and obliterated." When the local CD alarms went off--for nothing it turned out--I felt terror jerking through me.


The Horrific. Last year, I was listening to Jazz 24, from KPLU Olympia, WA, when the Emergency Broadcast alert was sent, warning of a tsunami in the northern Pacific. Since I live in Denver, I thought little of it. The next day I learned it was The Tsumani, which had demolished Tohuko, Japan. We've seen videos of the turgid waters crashing over the seawall and rampaging the coast worse than Godzilla. I read where Jin Sato, the mayor of Minamisanriku, and his fellow city workers climbed an antenna atop their office building to escape the tsunami. The water surged higher and higher, inundating the more unfortunate. The ordeal lasted all night. I can imagine Sato hanging on, his co-workers crying out as the swirling black waters smothered and tore them away one by one. Sato couldn't do anything but helplessly watch and hope for his own survival.

Is there something from Speculative Fiction that scares me? You bet. 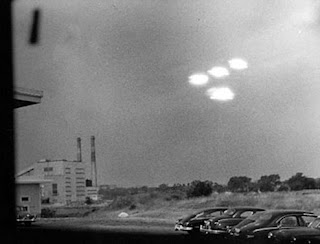 I really want to believe that we humans are not alone in this universe. I hope that before I die, we will make extraterrestrial contact and that it will be a good thing.

But it might not be. That's why I enjoyed the Alien and Aliens movies so much. And to amplify the horror, we learn that the real villains in those encounters are the corporate minions from Weyland Industries, who conceal warnings of the alien threat when they sacrifice the crews of the Nostromo and the Sulaco, and the inhabitants of LV-426, to capture the exotic and dangerous specimens.

We've seen government and corporate malfeasance run amok. The convenient finger-pointing during the aftermath of the Horizon oil platform fire. The Bhopal India disaster. So I'm willing to buy into an arrogant corporate honcho more interested in profit than decency.

Which brings me to Prometheus--the Alien prequel.

Here we have the tycoon Peter Weyland, the man who will unwittingly pit human greed and hubris against the cunning of remorseless monsters from another planet.

So what scares you?

Demonic possession, that's what scares me. You can fight aliens and blow them out the airlock in your sleek little panties and bra. You can survive a nuclear war and battle giant ants or grasshoppers or Godzilla. You can prepare for natural disasters as best you can, and if the battle is lost then you did the best you could.

Demonic possession is not like that. Like mental illness or Alzheimers, it takes what is the most important and vital part of us and makes us into something else. Movies and stories with possession haunt my dreams. I avoid them when I can. Give me Godzilla anytime.

Bonnie:
MY sleek little panties and bra? No.... But demonic possession? Hadn't thought of that. The voices in my head haven't let me.

Sometimes you scare me, Mario...

What scares me? Forgetting stuff. Snakes. Water I can't see into. And being me.

Reality scares the poopoocaca out of me. That weird guy by himself taking up the whole back seat of the bus...daring somebody to try and sit there. Wondering how many lonely basement geek-hackers there really are in the world.

Somebody chatting away on a cell phone (to whom?) while sitting on the john.

Trying to imagine all the creepy things crawling in and around the kitchen sink.

And Blind Faith -- when you truly believe that tattooed and punctured kid dropping the lettuce and tomatoes on your sandwich actually washed his hands before he came out of the restroom.

Man, all that sh*t will keep me up screaming all night.

Ron: The guy at the back of the bus? You talkin' 'bout me?