My husband has often asked why anyone would want to be an author. Usually the question comes after I’ve had a crisis of some sort—worry about a new release, about a new book, about the next contract. I realize I’ve been lucky—I have seven books published, stories in a dozen anthologies, two more books on the way, a contract for a new series in the works. And yet the insecurities are as real and as overwhelming as they always were. Mario talked about branding on Monday. When I released my first book in 2004 I remember asking my friend Charlaine Harris for marketing tips. She couldn’t help. She never did any marketing. She built her career book by book—two series and 13 books before she hit gold with Sookie Stackhouse and the Southern Vampire series.

Can’t do that anymore. Publishers aren’t willing to wait for you to build an audience. You have to network, have a social presence, put up a website, blog. You have to attend conferences, teach classes, become active in writing organizations. You have to come up with cute swag items and spread them around. Hold contests and give lots of stuff away. You have to be a social animal and everyone who knows me (I mean really knows me) understands that I'm not. I'm scared to death before every signing, panel appearance or talk. I have to play the game, but it's through pain. I marvel at how easy it is for Mario and good pal Margie Lawson.

And in between all of this, you have to come up with the next book idea. You have to find the time to actually write the books.

Publishers want a winner right out of the chute. They’re farming the suddenly fertile field of e-publishing, snapping up novels they originally rejected because the writers now come with built-in audiences. Friends that Mario and I know are e-pubing and having some success at it (see Jeff Shelby), even though they started they way we did, writing for years, querying agents and finally receiving the call. But for one reason or another, their series were dropped, their contracts not renewed. They’re starting over on their own. They’re getting their stories out and reaching readers.

Which is what we as writers want, isn’t it? To reach readers. Which brings me full circle and answers the question I posed at the beginning. Writers write because they want to reach readers. How to do that seems to be the new question. Hold out for that agent and hope to find a traditional house to publish your book? Or go it on your own?

What do you think? As readers, how do you pick from the thousands of ebooks out there? Are you buying more ebooks than print books? Do you look for writers you know? Is pricing a consideration? Writers, are you considering e-pubing on your own? Going both the epub and traditional route? I really am interested in hearing your answers.

# # # #
February has been a busy book release month for our League friends.Next book up is Allison Pang's A Sliver of Shadow 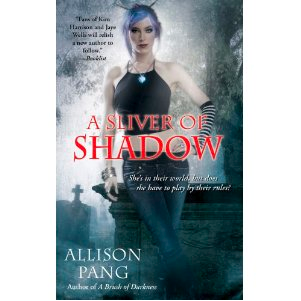 Release date: Feb 28
From Amazon: WAR IS HELL. AND WAR WITH HELL IS NO FUN EITHER.
Just when her new life as a TouchStone—a mortal bound to help OtherFolk cross between Faery and human worlds—seems to be settling down, Abby Sinclair is left in charge when the Protectorate, Moira, leaves for the Faery Court. And when the Protectorate’s away . . . let’s just say things spiral out of control when a spell on Abby backfires and the Faery Queen declares the Doors between their worlds officially closed. The results are disastrous for both sides: OtherFolk trapped in the mortal world are beginning to fade, while Faery is on the brink of war with the daemons of Hell. Along with her brooding elven prince Talivar and sexy incubus Brystion, Abby ventures to the CrossRoads in an attempt to override the Queen’s magic. But nothing in this beautiful, dangerous realm will compare to the discoveries she’s making about her past, her destiny, and what she will sacrifice for those she loves.

How many did you get right? Check answers on Flavorwire here

All right...looks like Mario, Warren Hammond and I are heading down to Colorado Springs for Galaxyfest on Saturday. Don't have any kind of schedule yet except that we know we're participating in the Literacy signing on Sunday...don't even know the time. Sorry. I know the location, though: Antlers Hilton 4 South Cascade, Colorado Springs. Tele: 719-955-5600
If you're in the area, stop in and say hello.

Comments:
I'm probably a dying breed, but I like real books that I can hold in my hand and smell the ink. I have an e-reader, but I find what I download on it falls into one of three categories (a) books I have in print but want on my e-reader too (b) books/novellas by authors I love that are only in e-format (c) books under $3 (most are under $1). I've found a couple of fairly okay writers buying the cheap books, but a whole lot of crap, too. And the typos in them make me a little nuts.

In a perfect world (for me anyway) bookstores would be abundant and when I bought a real book, I would have the option to pay a little extra to get the digital version, too. And all books would be in real solid hold-in-your-hand format, so that I could have them on my bookshelves.

I agree with your comments, Karen. In fact, I'm surprised someone hasn't come up with the idea of getting an ebook right along with a hard copy. It makes sense to me.

Thanks for commenting. J.

Um, I haven't gotten on the ereader bandwagon yet. I have enough trouble keeping up with the paper TBR pile.

But I am right there will you on all the social marketing, pretty much I drive myself crazy *every night* wondering if I'm doing enough.