Growing up, we get lots of advice, all well intended, I'm sure. That advice often becomes a voice nagging at the back of our minds and over time, that mental scold can keep us from doing something it's in our better interests to do. 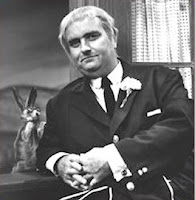 One of those nags came to me from Captain Kangaroo. One day he had a bug up his early-morning butt about people defacing books. He warned us young readers not to mark our place in a book by dog-earing the page corner, and to instead use a slip of paper. Reasonable advice. To reinforce that idea, at the end of the school year, when we turned in our texts, the teacher would flip through the books to make sure we hadn't defaced the pages.

What that stamped into my mind was that books were special, and I grew up revering books practically as holy objects. I've never thrown a book away, even one that was water-damaged or chewed up by the dog. Those books I passed along to a donation box, knowing full well they would toss them out--but at least there was no blood (ink) on my hands.

Where this not-marking-a-book advice became a liability was when I began to teach writing. Like my fellow scribes, I get excited whenever I discover a well-turned phrase and have decided I needed to share these sparkling gems. There are only so many words in the English language, and I'm amazed when another writer has managed to string them together in fresh ways. At first, I tried to mark the found passages with slips of paper or Post-It notes (stop pestering me, Mr. Kangaroo!), but often found myself lacking said bookmarks. After an agonizing self-debate, I've at last given myself permission to note a choice passage with a pencil mark in the margin. This way I don't slow my reading by much and can simply flip through the book to look for the thin gray lines and rediscover my buried wordy treasures. Yes, in a way, it may be considered vandalism, but it is for the greater literary good.

Here are a few of my favorites passages:

Confronted with this tally, my mind balked and retreated into a weird, almost robotic state of detachment. I felt emotionally anesthetized yet hyperaware, as if I had fled into a bunker deep inside my skull and was peering out at the wreckage around me through a narrow, armored slit.

Steven Hely, How I Became a Famous Novelist

Lucy’s boss, David Borer, an editor at Ortolan, was sitting next to her. Yards away in the semidarkness, you could still see the fear in his face. He was zipping his eyes around the room, as though somebody were about to reveal the secret of publishing and he was afraid of missing it. He was older than we were, fey and beaten. He looked like an elf who’s gone though a bad divorce.

He had changed since his New Haven years. Now he was a sturdy, straw haired man of thirty with a rather hard mouth and a supercilious manner. Two shining, arrogant eyes had established dominance over his face and gave him the appearance of always leaning aggressively forward. Not even the effeminate swank of his riding clothes could hide the enormous power of that body--he seemed to fill those glistening boots until he strained the top lacing and you could see a great pack of muscle shifting when his shoulder moved under his thin coat. It was a body capable of enormous leverage--a cruel body.

What passages have made you go mmmm...most delicious phrasing?

This Wednesday at 7PM, tap into your schizo self and find a way to be at two places at once. 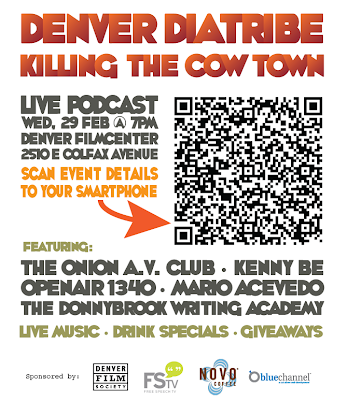 TWO: Denver Diatribe, I'll be on the panel, Killing the Cow Town: Depictions of Denver in Film, Literature, and Music. With Cory Casciato, Ron Doyle, Jared Maher, and cartoonist Kenny Be. Denver Film Center, 2510 E Colfax (next to the Tattered Cover). If that doesn't work, and in case you missed Kazimer's party, you get a chance for sloppy seconds (yum!) at a signing with Cindi Myers, Saturday, March 3, 3PM, The Broadway Book Mall, 200 S Broadway, Denver.

Comments:
Like you, I also love the turn of a good phrase.

Damn it, even I'd choose the Denver Diatribe. Did you see that lineup?

Thanks for the pimpage. You ROCK!