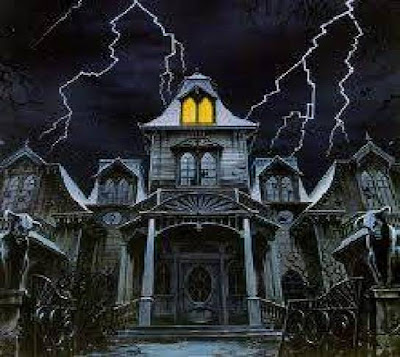 In the spirit of the holiday, here's an adaptation of Little Red Riding hood by Angela Carter from her collection The Bloody Chamber and Other Stories published in 1973:

Of course when it's Anna involved, things are a little different.

David is getting antsy.

Makes me smile since it’s usually me doing the squirming.

“What’s the matter? We’ve only been here an hour. You got some place better to be?”

I turn my face away so he can’t see the smile. I know he has some place better to be. I saw her in the doorway when I picked him up at his condo.

“Don’t be a smart ass, Anna. Tell me again what we’re doing here?”

“Snatch what? Where is the prick?”

A movement from the bushes on the opposite side of the road. David doesn’t see it. But I do. Vampire eyes. We’ve been watching the guy’s front door. There’s no back door out of the apartment.

Still. I catch a scent.

I reach for the door handle. “I’ve got to pee.”

He mutters something under his breath but I’m already behind the car and bolting to follow the sound of the rustling bushes to our right. Vampire senses jump to the fore. Eyes pierce the darkness, turning night to day. Ears hear every insect crawling, skittering or buzzing out of my path. Nose catches the scent of the creature moving away from me.

David doesn’t know that I got close to the guy we’re after this afternoon. Got close enough to breathe in his scent, close enough to make the grab myself before I was interrupted by a pain in the ass who stopped me on the sidewalk to ask for directions. By the time I got rid of him, the skip had disappeared.

But it’s the same scent I detect now under the musk of fur and testosterone.

I move noiselessly through the bushes. Close the distance between us. He’s just ahead of me. But he’s moving faster than a man would be and is crouched low to the ground. It doesn’t take much of a jump to determine what I’m chasing.

I let vampire have her head. Fighting werewolves is not my favorite pastime. They can be nasty creatures. If I’d known that’s what I was chasing, I’d never have involved David. Can’t worry about that now.

Where’s the guy going? We’re in Balboa Park. It’s not quite dusk on a hot summer evening and I can’t make out where he’s headed. Until he takes a sharp turn and waits for traffic on the Prado to clear. Then he lopes across the road and straight into the dog park—the only area open to off-leash pets.

Curious. What’s he doing? Looking for a chance to get lucky?

I call Vampire back and proceed after him, fully human. The park is not yet as crowded as it’s going to be in an hour or so when the home-from-work crowd brings their pets for a romp. But there are a half-dozen dogs sniffing and scuffling, their owners chatting nearby.

The wolf pauses, watching. He’s bigger than most of the dogs but no one pays any attention. I enter the park and start toward him.

The wolf turns and meets my eyes. He lifts his nose. He recognizes vampire. But then he turns away, casually ignoring me, resuming his perusal of the animals as if searching for just the right one.

He makes his choice with a snarl and faster than I would have thought possible, he lunges.

Toward a child, playing off by herself to the right of the group of adults.

I reach her first, scoop her up and thrust her into the arms of a startled woman.

Wolf gathers himself to lunge at me.

If I call up vampire in front of all these people, it won’t be pretty. Instead, I pull the .38 from the waistband of my jeans, aim and fire.

I catch the wolf in midair, but I haven’t accounted for his speed and the bullet slams into his leg, blowing off a paw and breaking bone with a sickening crack. He lands with a howl, whirls on three good legs and stumbles off the way he came.

I want to go after him but my way is impeded by a group of frantic onlookers, all reaching out hands to thank me, all asking the same questions at once.

Are you a cop?

By the time I finally get free, and make it back to David, he’s standing by the car, our skip, naked and bloody, already in handcuffs.

David has his cell at his ear. When he sees me, he clicks off. “Where the fuck have you been?”

I point to the skip. “What happened to him?”

David has fastened a tourniquet around the guys arm, just below the elbow. A stump at the end of his wrist drips blood. “Somebody blew this guy’s hand off. He isn’t saying who. I got him as he tried to sneak his way back into the apartment. The paramedics are on the way.”

The guy and I—wolf and vampire—stare into each others eyes. I wonder if we’re thinking the same thing…my, what big secrets we have. 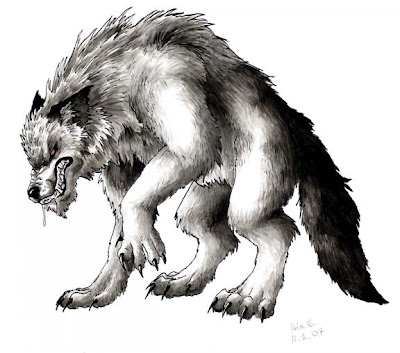 Image from HellHorror.com
Happy Halloween from Anna and Me
¶ posted by Jeanne Stein @ 1:19 PM

Comments:
"musk of fur and testosterone" Isn't that me before I shave in the morning?

Who do you think I was channeling when I wrote that description?

Not that I've ever smelled you in the morning before you shaved, of course...

Awesome story! Thanks, Jeanne ... yes, it is indeed a treat!

Glad you enjoyed it Vicki and Chris!

Highly excellent! It's in keeping with my all paranormal/supernatural/horror reading for the entire month of October. THANKS!

You are welcome Vickie-- what's Lady K going to do for Halloween this year?