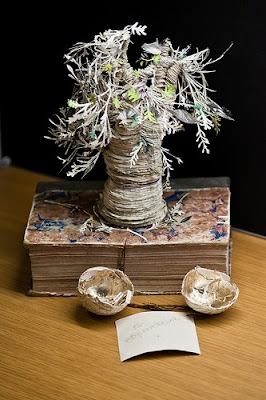 I posted this on Tweet yesterday but I think it's worth repeating:

The mysterious case of Edinburgh's beautiful paper sculptures, which have been placed by an anonymous artist in various locations as gifts "in support of libraries, books, words, ideas," began last March, when the staff at the Scottish Poetry Library discovered a "poetree" left on a table, Central Station wrote.

In June, the National Library of Scotland "found themselves the recipient of a similar piece," and since then new works have made their stealthy appearance at the Filmhouse and the Scottish Storytelling Centre. In late August, two more were found during the Edinburgh International Book Festival, followed by yet another in the Central Lending Library on George IV Bridge.

Check out the other remarkable and beautiful sculptures by clicking on the link.

A couple of trailers I found interesting-- the first for David Fincher’s version of "The Girl with the Dragon Tattoo" based on the novel by Stieg Larsson.


Love it!! Now I'm not usually too keen on remakes, but the American version of The Girl With the Dragon Tattoo stars Daniel Craig. Do I have to say more?

It's Wednesday afternoon and I've been home about twenty-four hours. The trip to SoCal was wonderful. I hope all who came and took pictures will send me copies. The new Mysterious Galaxy Redondo Beach store is something! A separate events area, a space for a cafe in front, the usual spectacular display of books. Thank you for inviting me to sign. Both events went well and I always feel so at home. Here are a few pictures. 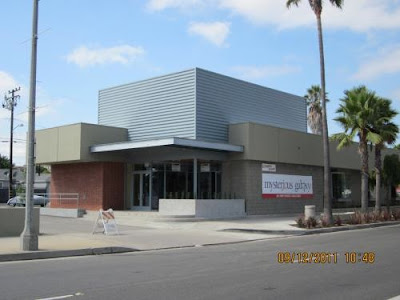 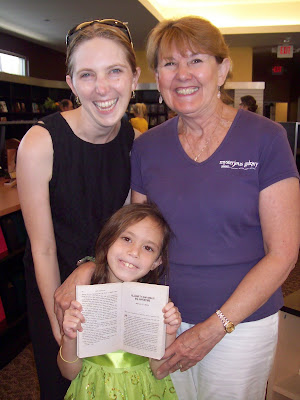 If you look closely, you can see Elizabeth holding the story Elizabeth and Anna's Big Adventure from the anthology A Girl's Guide to Guns and Monsters from DAW. This is Elizabeth!!! And her mom, steampunk author Suzanne Lazear. 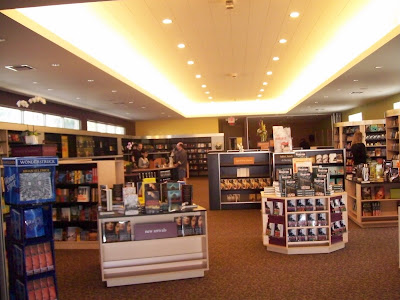 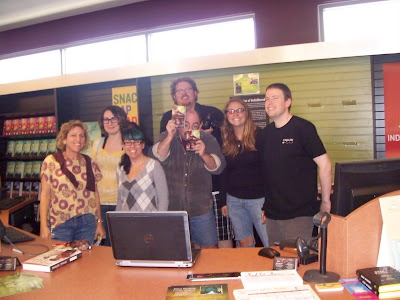 The beautiful interior and the industrious, always serious staff 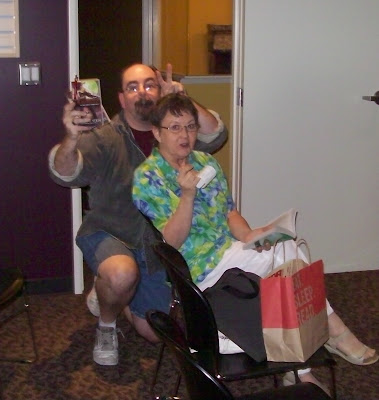 Patrick "The Great" Heffernan entertains my sister, Connie after the festivities
And one picture taken at the San Diego store the next day: 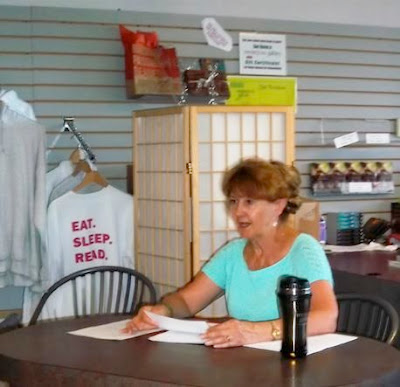 I love the Mysterious Galaxy and now that they have two locations, there's twice as much to love!

A couple of pics I especially like-- Here's Sarah Brackett and Gina Silva at our first meeting about three years ago at the Mystery & Imagination Bookstore in Glendale... 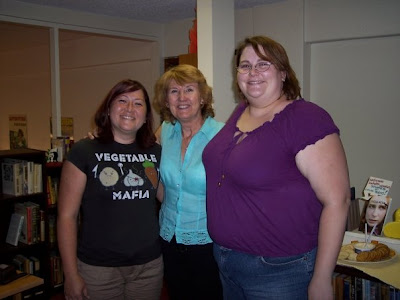 And here we are last weekend at MG: 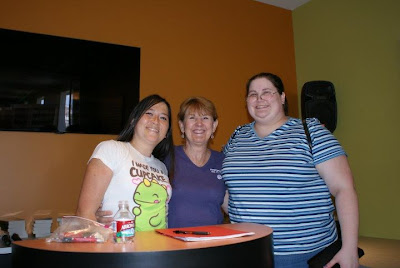 When we first met, Sarah was pregnant. Here's the cute as a bug result: 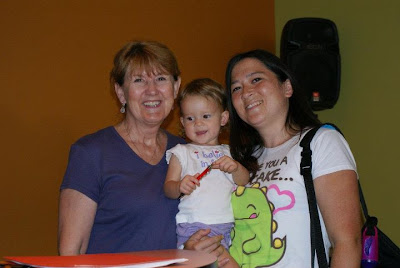 Thanks, Sarah and Gina, for sharing these pics. 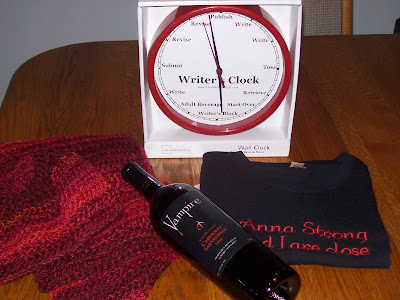 A hand-knit scarf and cap from LaRay and Nikki Gillison, a bottle of Vampire wine from Kathy Self, the Writer's Click from Linda Rohrbough, and a tee shirt from an anonymous reader. Thank you's are on the way!

# # # #
Anybody watch Ringer on Monday? I liked it. Sarah Michelle Gellar is still cute as a Buffy, but It's just convoluted enough to appeal to me. What did you think?

Comments:
Jeanne: How come you don't look this nice and friendly at critique? Awesome Muppets trailer.

I'm ALWAYS friendly...to almost everyone. I liked the Muppet trailer, too!

I didn't think I'd want to see the US version of Girl With the Dragon Tattoo, but Daniel Craig will have me see whatever he's in pretty much.

I know we will be seeing the Muppet flick when it comes out. I need to get The Muppet Show on DVD for our household.

Really looking forward to seeing you on Saturday afternoon at Westminster B&N. Banner author visits this week for Lady K and me. John Connolly on Tuesday night and you on Saturday. SWEET!

Didn't watch Ringer. Forgot it was on and forgot to set the DVR for it. I may have a difficult time separating this character from Buffy. Though I don't have that issue with David Boreanaz on Bones and Angel.

Vickie-- I'm afraid I won't be at B&N this weekend. Having eye surgery today (Friday)--it's been coming but now I can't put it off any longer. I'll be there in November. If you want a signed copy before then, email me at jeanne@jeannestein.com

J: {HUGS} and sending out the healing vibes. We will see you in November, chickie! Let us know when.

We had so much fun seeing you last weekend. HUGS