Wednesday, July 06, 2011
New League Books Out...among other things First order of business is to pimp our League associates who have books out this week. Click on this link to get a recap of all the books and to see the covers. Thanks to Carolyn Crane for putting this together. Below is a list of the books and authors and their Amazon links.

1. Dakota Cassidy Burning Down the Spouse

4. Diana Rowland My Life as A White Trash Zombie


Good reading here and all, of course can be found by contacting your favorite local Indie

I'll be adding more along with links to interviews as we go... Thanks, Jay Salam, for your good work and your gentle reminders that I need to update my website occasionally!!

Warner Bros won a multi-studio bidding war for the novel by Ally Carter. Screenwriter Shauna Cross is set to adapt.

Drew Barrymore is attached to produce with an eye to direct Heist Society, a young adult thriller being made by Warner Bros.

Barrymore joins Denise Di Novi and Di Novi Pictures' Alison Greenspan as producers on the project, which Warners won last year in a multi-studio bidding war for the novel by Ally Carter. Screenwriter Shauna Cross is set to adapt.

The book follows a young woman named Katarina Bishop who hails from an extended family of cat burglars and master thieves. The girl leaves her illicit life behind, but when her father is the prime suspect in the case of a mobster's missing art collection, she assembles a crew to track down the art and steal it back.

The studio is aging the characters a notch into their early 20s. Barrymore will also supervise the writing.

Now I haven't read the book, but this sounds a lot like the TV series Leverage but with twenty-year-olds, doesn't it? 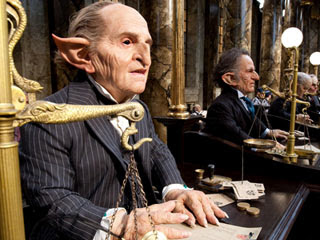 For an exclusive sneak peak of HP's episode in Gringott's Bank check here . Spoiler alert, though, Inside Movies says if you don't want to know what happens, don't peek. 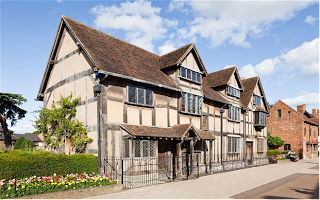 Want to test your literary home IQ? Whose house is this? The answer (and more literary houses) here
# # # # 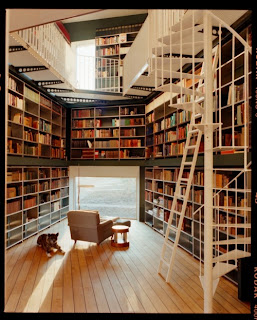 Can't you just imagine what's outside that window? What glorious view? Has to be water...the ocean maybe or a lake. And can't you imagine yourself curled up in that chair with a good book and a glass of wine? It's my fantasy library.

So Wednesday was Mario's birthday. We celebrated at critique on Tuesday night and I'm sure he's still celebrating as we speak. He and I just finished a short story for the Bubonicon program which I think I can convince him to share with you after the con. We've decided we may just have to collaborate on something else. We actually had fun! He listened to me and everything!

And I guess I've made the big time. Excerpt from an article from Fox News:

In fact, researchers reported online June 8 in the Journal of Sex Research, books aimed at 12- and 13-year-olds were no less sexy than books aimed at readers ages 14 and up. In addition, sex was rarely presented in a healthy light: Contraceptives and practical consequences were almost never mentioned, said study researcher Sarah Coyne, a psychologist at Brigham Young University. (Brigham Young University is operated by the Church of Jesus Christ of Latter-day Saints and is the largest religious university in the United States.)

"I would never argue for censorship," Coyne told LiveScience. "But I do think we're missing something here."

The "Gossip Girl" books and a vampire series "The Anna Strong Chronicles" were two series that were particularly focused on sex, Coyne said.


Huh? The title of the article is Some Teen Books Surprisingly X-Rated... read it all here if you want. And note where the expert study was conducted. They could have at least mentioned my name so any teen perverted enough to want to find me, could. I mean, really....

How could she ever thing the Anna books are YA??? ~head desk~ That article makes me stabby. oh well, here's to the Anna books being the next HS book craze....

I'm so proud of you! You know that you've made it when FOX News takes a potshot at your books for distrubing their poor, weak-minded youth with your dirty, dirty sex scenes. I bet, if they look hard enough, they'll be able to find the connection between Anna and WMD's, and ultimately invade.

WOOO-HOOO! You are in the big-time now, chickie! Fox News and all their *superbly researched* and *completely unbiased reporting* have recognized you!

I have to check my work schedule, but I believe I can make the Broadway Book Mall signing with you and Nicole, etc....

It will be good to see you,Vickie-- I'll post this on the blog next week but evidently the "researchers" at BYU mixed up my series with PC Cast's because we both have a book called Chosen. Richelle Mead let me know. What a joke!!!