Wednesday, June 01, 2011
Talking (Trailer) Trash Okay--so that sounded much cleverer in my head then it looks on the page...but I came across trailers for some of my favorite programs--most starting in a month or two--that I thought I'd share. First, though, a word about my birthday trip to Havasu. Thanks to my daughter Jeanette and her significant other, Steve, we had a wonderful time. I took about three hundred pictures but haven't had a chance to go through them. You know how it is with digital cameras...you just keep snapping. I even took some video and if I can figure out how to post those, I will. Thanks to all of you, too, who shared birthday wishes on Facebook. And to my critique group for the cake last night and to Mario for this great book: 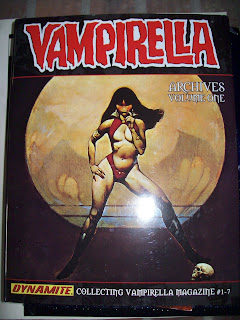 Harry Potter & The Deathly Hallows Part 2, to be released on July 15

From Blastr.com : The embarrassing moment Superman met Doctor Who

Did you see this magazine on the stands? 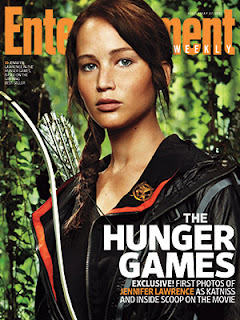 June 7th is the release date for two anthologies in which I have stories.

HEXED -
with Ilona Andrews, Yasmine Galenorn and Allyson James. My novella, Blood Debt, introduces a new love interest for Anna. But first she has to save his life, and her own. 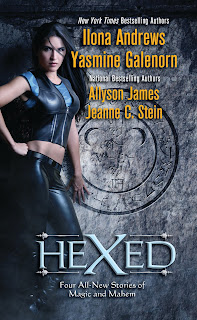 and
Chicks Kick Butt
featuring a host of authors including Rachel Caine, Lilith Saintcrow, Jenna Black and many others. My story, Superman, is a story taken from an episode in Crossroads. Max and Anna track down a rogue vampire on the Mexican border. 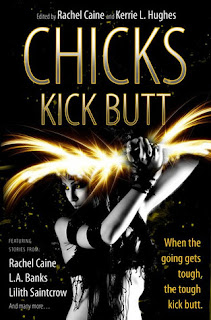 Johnny Depp has been talking about making a film version of the late 1960s gothic soap opera Dark Shadows for nearly four years. A tale of witches, vampires and other assorted creatures of the night, the project fits in perfectly with Depp's and director Tim Burton's sensibilities, but has taken a long time to actually get made, the two pairing on Sweeney Todd and Alice in Wonderland in the interim. Today the duo's dream is realized.

Warner Bros. has sent out a press release announcing that production on Dark Shadows has begun. Also included in the release is a full plot synopsis and cast list, which includes the previously unannounced Jonny Lee Miller, who will be playing Johnny Depp's bad-seed brother Roger, and Gulliver McGrath, who will be playing Roger's son. The full plot synopsis is below. If you don't wish to know anything about this project, then you probably shouldn't have clicked on this article.

As you can see, I didn't include the spoilers but you can check it out if you're curious...

# # # #
For the wordsmiths among us, what do you think is the most used word in the English language? Any guesses? Post your guess in comments and then check here to see if you're right!

All I have to say about this next one is hmmmm...I know the economy is bad but you have to be really hard up for a job to let somebody do THIS to you!

The job interview process can be quite taxing to the applicant's mind, body and wallet, but at no point should it involve being tied up, flogged and tortured... right?

Authorities in suburban New York have arrested a man who did the above-mentioned things, and more, to men who thought they were applying for high security gigs in the intelligence-gathering industry.

The jobs were fake, but the pain was real.

According to the AP, between 2008 and 2010, a man recruited a handful of men for these imaginary jobs, saying he would help train them for their eventual work overseas. That "training" included stripping them down, whipping them and sticking needles under their fingernails.

Police found a kit in the man's car that included rope, needles, strapping tape... and vegetable oil. No mention of whether it was corn, canola or peanut oil.

The man was arraigned on 29 counts, including assault, criminal impersonation and forcible touching, and ordered held on $250,000 bail.

One last thing from pal Kat Richardson. She's looking for minions...interested? Get details here. Sounds like a great idea. I think I'll enter. Maybe I'll even try it myself...any potential Anna Strong minions out there?

Comments:
True Blood - I've watched that trailer so many times and am completely psyched,

Dark Shadows - FINALLY! I cannot get enough of the Tim Burton/Johnny Deep collaborations and have been waiting for this one for a while. Those two are the perfect fit for this film. I can't imagine anyone else doing it nowadays to be honest.

Hunger Games - I always see that book at the store but have never picked it up. Is it any good, and is that a bow an arrow I see her sporting? Well, if it has bows and arrows it must be good.

Anna Strong minions - Jeanne I've been one for quite a while now in my little part of the world. The local bookstore now carries your series b/c I ordered through them and apparently they use my sci-fi/fantasy/paranormal orders as a guideline for what to stock. The joys of small town life. :p

You are so nice, Leia! I appreciate your loyalty and support.

You know you have two minions in this household.

I am definitely looking forward to seeing how HUNGER GAMES translates to screen.

DH is keeping HBO for one more year just so I can watch this season of True Blood....naked Eric....sigh....

I sent Kat Richardson my essay on why I would be the perfect Greystalker minion. Keep your fingers crossed and I'll keep mine crossed for you when you send your essay in.

Thinking on Johnny Depp, I am listening to LIFE - Keith Richards and his buddy, Johnny Depp, is narrating....20 disks of Johnny telling me a story.....sigh....and Keith is a good storyteller.

Your hubby is a keeper for sure!

Glad you liked Hexed. Where did you post your review?

And I posted it on Shelfari and Goodreads and Librarything. I'll post it to B&N and Amazon, too. I always forget them....

thanks, Vickie-- I am going to post a link to your great review!!

Such a great article it was which A tale of witches, vampires and other assorted creatures of the night, the project fits in perfectly with Depp's and director Tim Burton's sensibilities, but has taken a long time to actually get made, the two pairing on Sweeney Todd and Alice in Wonderland in the interim. Today the duo's dream is realized. Thanks for sharing this article.