Monday, May 30, 2011
Outsnark your competition with fashion Mario here,

Hope everyone is having a great Memorial Day weekend.

The big news is that last week my sister, Sylvia Acevedo, was sworn in as a commissioner in the White House Initiative for Educational Excellence. It's no secret that Sylvia is the smart one of the family, seeing as she is a Stanford grad with a slew of awards for business and community achievement. Always the forward thinker, at the first meeting of the commission candidates in the White House, she wanted to make sure she stood out from the other hyper-Type-A's. While everyone else wore conservative business attire, my sister had donned an all-white outfit with gold and black piping. And it worked. President Obama noted Sylvia and made it a point of greeting her.

For the swearing-in ceremony by Supreme Court Judge Sotomayor last week, Sylvia upped the fashion game. This time she wore a jacket in snazzy black&white zigzags and finagled her way to the front of the line and made sure she got the best seat front and center as one of the "Wise Latinas." (Some of the other women wore all white, which as so last time.) 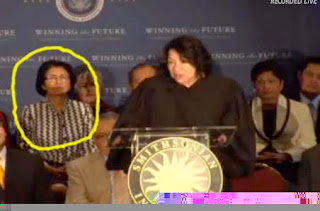 And in another example of her cleverness, she had arranged a signal to her partner Janet. An ear tug means: " I'm thinking of you." 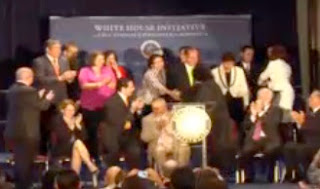 And here is Sylvia shaking hands with Judge Sotomayor.


The reception was catered by McDonalds, and my sister assured me there was plenty of good wine and cheese and not one Quarter Pounder or Big Mac in sight.

We writers constantly tell the wanna-be's that one key to improving your writing is to read...a lot. Sadly, I've been somewhat of a slacker, but I recently plowed through a couple of great books that I wanted to share.

How I Became A Famous Novelist by Steve Hely is the best fiction story I've read about the writing and publishing game. The protagonist, Pete Tarslaw, gets invited to the wedding of his ex and so decides to exact revenge by showing up as a famous novelist and humiliating the bride. Tarslaw studies the bestseller lists for inspiration. He tries writing a genre novel but gives up because it has "too many moving parts" and opts for a literary saga because he can cover the plot holes with "wordy spackle." It's a wonderful tale about an ambitiously clever writer undone by his pettiness and cynicism. Hely is an impressive, insightful writer and his crisp, engaging prose kept tugging me along.

The California Roll by John Vorhaus was a rewarding detour from my usual fare of hard-boiled mysteries and urban fantasy stories. Radar Hovelander is a grifter and such a liar that at times I wasn't sure what he believed. Hoverlander gets pinched in a con that gets murkier and deeper with every chapter. Vorhaus is a masterful writer and has peopled his tale of deception with quirky double-crossing characters who flip-flop loyalties like frogs on hot pavement.

Comments:
Congratulations to your sister! I like her style.

Wow, tell Sylvia I said congratulation and send her my love!

Hey Mario, John Vorhaus here. Thanks for the kind words about The California Roll. It's just, as Vic Mirplo might say, "The tip of the icebag." I hope your readers enjoy checking out the rest of the oeuvre. -jv

Vickie: We all need to copy my sister's style.
Jeanne: Sylvia says thanks.
John: Glad you dropped by. Bought several copies of the California Roll to give away. Gotta spread the luv!

On your advice, I started reading The California Roll last night, and now I have a reading hangover (wink, wink) from staying up so late. Great read so far. Thanks for turning me on it it.

Wow, awesome about your sister. So impressive!

Coolness must run in the Acevedo blood! She's seriously one smart cookie to have gotten there in the first place. Congratulations to her. I too bought "How I Became a Famous Novelist," but hadn't begun it yet. Thanks for the heads up on it. Now I have to get to it! See you soon and can't wait!