Wednesday, May 04, 2011
A Kat, A Nook, Star Wars and a new Steampunk convention... Some good news from my League pals -- First of all, from Kat Richardson who writes the Greywalker series, a walking tour of Harper Blaine's Neighborhood in Seattle. This is very cool

Then in further good news for Kat, from Publisher's Marketplace, her next three urban fantasies in the Greywalker series about a private inspector, who is forced to risk the hard-won love and stability she has finally found in order to protect the world and the Grey, and defend those caught where ghosts roam and magic sings, (was sold) to Anne Sowards at Ace, in a good deal, by Sally Harding of The Cooke Agency.

Next, a new contract for another Leaguer, Michele Bardsley: Michele Bardsley writing as Michele Vail's THE REAPER DIARIES, introducing a girl who wanted to keep her part in the family zombie-raising business quiet - until her 16th birthday when her boyfriend-to-be dies, she brings him back to life, then finds herself immediately shipped off to necromancy school, where her first assignment is reaping the soul of the very same boyfriend-to-be; and her reaping tutor? the same hot but very angry reaper whose work she undid in the first place - and that's the least of her new problems, to Natashya Wilson at Harlequin Teen, in a three-book deal, by Stephanie Rostan at Levine Greenberg Literary Agency (World).

Star War fans-- wish this was coming to Denver... 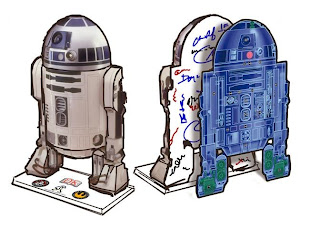 Beginning in early May, a group of DK's talented Star Wars authors and illustrators will hit the road, visiting bookstores, schools, and libraries for the DK Star Wars 'Attack of the Authors' East Coast Tour. Events will run from May 7th through May 15th, from Massachusetts, all the way down to Florida.

Tour guests include Ryder Windham, Chris Reiff, Chris Trevas, Jason Fry, and Her Universe founder Ashley Eckstein (the voice of Ahsoka Tano in Star Wars: The Clone Wars). Co-sponsored by Mimobot and Her Universe, the 'Attack of the Author' events will also feature guest appearances by the costumed characters of the 501st Legion and the Rebel Legion, members of the R2 Builders Club, as well as raffles, giveaways, and Star Wars activities.

A full-sized R2 droid replica will be coming along for the ride, collecting signatures of attending 501st Legion and R2 Builders Club members at each event, which will be raffled off to benefit a national charity organization after the tour. A full list of dates and author appearances can be found here.

Everyone seems to be working on this:

A couple of weeks ago I covered Autography [1], a prototype system for autographing digital books involving an iPad 2. Now Barnes & Noble is about to release an upgrade to the Nook reader that will allow Nook owners to have authors sign their e-books using a stylus [2]. (Presumably via the touch-sensitive color LCD screen portion of the reader.)

Interestingly, eReader (which Barnes & Noble bought) long allowed authors to do something similar using an Easter Egg function of the Palm PDA reader client. I wonder if that’s what gave B&N the idea?

At any rate, for Nook owners this could be a rather better way to do book autographs than the complicated Autography system that would involve social networking and downloading and various rigamarole on the part of the author. Nook owners could just activate the autograph function, hand the stylus over, and get the signature. Just like with a paper book.

Which in turn makes buying a Nook start to look more attractive to “serious” e-bibliophiles. The wi-fi model is becoming available for $80 refurbished now and then, after all…

So how do you Nookies feel about this? 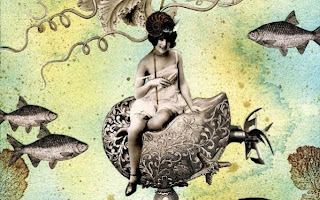 Nancy and James Hay say they’re striking while the steampunk iron is hot. The two are helping program and promote the Gaslight Gathering, the first-ever Southern California steampunk convention, happening at the Town & Country Hotel in Mission Valley May 6 through 8.

“Steampunk has been around since ’87,” says James, wearing a mad-scientist, Victorian-era costume complete with brass goggles and a futuristic-looking time-travel watch. “But it was just kind of a low-lying thing—not really a big part of science fiction. Then, I eventually heard about the first steampunk convention, and I went, ‘Oh, OK, when did it become a movement, and why the heck didn’t anyone tell me?’”

The couple knew the steampunk zeitgeist was strong when talk of it left the fan sites and entered the mainstream. Locally, there was the steampunk art show at the Oceanside Museum of Art and a steampunk-themed fund-raiser at Sushi Performance & Visual Art in East Village, so they figured it was a good time for a convention in San Diego.

The affair will include how-to panels on things like making your own carpet bag and designing vintage shoe coverings, plus literary talks, a masked ball, concerts and tea time.

“Making this an annual convention is the aim,” Nancy says. “And as long as Time magazine doesn’t put steampunk on the cover, then we’re probably OK, because once that happens, it means the thing has peaked.”

More at the link above. Also check out Winona Cookie's site. Some great stuff.

Okay, sports fans, that's it for this week. What's going on in your world that I should know about? Or that I shouldn't know about. I'm not picky. Anytime you spot an article of interest about a favorite author or book or whatever, let me know. I'm always on the lookout for good stuff. My life right now is butt in the chair, hands on the keyboard as I finish up the eighth Anna Strong adventure. This one is shaping up to being much darker than any of the others. Lots of asses for Anna to kick. Mario really loves that. I have a working title--Haunted--but that may change, Just not sure yet.

Let me hear from you!

Comments:
Hey Jeanne! I for one am looking forward to Anna's next big adventure. The books always seem to come out when I'm neck deep in stress which makes them the perfect escape for a little while :) I think that whne I actually end up graduating from gradschool you will be atleast part way responsible lol. Speaking of whihc, as of yesterday my semester is over! I can get back to blog reading and comment posting and all those things that normal humans do. It also means I don't have to keep filling my own blog with random youtube videos like I have the past week or so b/c I was too busy to do much else.

As for Nook autographs, I'm a bit meh about it. there is something about the pen and paper that makes autographed books special and nice additions to your collection. Then minute you take it digitial, you might as well be copying andf pasting the signature onto a digital file. It's weird to have people scrambling to have such a personal addition to such an impersonal media.

Thanks so much for mentioning the YA sales, Jeanne. :-) I appreciate the lurve.

And I like the idea of an autograph function. It's cool.

Six months ago I would never have dreamed of buying an e-reader. I thought they were ridiculous. However, before I went on my latest trip to India in January I bought a color Nook. The ability to carry so many books in one lightweight package was just too appealing. Now I have no desire to touch a paper book again (except for cookbooks). Enlarging the text to a readable size at will and being able to read in the dark plus using the app on my phone to read when I'm out are such pluses I can't imagine going back. I haven't picked up a single paper book in my former TBR pile. It's to the point where I've debated whether or not to buy certain author's "books" in person to be signed at all since they will now probably not be read as they are paper, or just buy them on the Nook, or both. So...I have to say I find the signing possibility very appealing.

When (and it used be 'if') I go e-reader, it will be a Nook. Just a matter of time I reckon.
I still will buy the print books when I go to book signings, though. I love seeing the signed copies all lined up on the shelf.

Let's see...what's goin' on here? We launch our satellite on Friday...Not sure how much coverage it will get except on NASA channel. Goes out of the Cape around noon-ish I think Mountain time. So I get to be back on crew shifts which means quality reading time when it's quiet and grocery shopping (or whatever else shopping) in the middle of the week when everyone else is at work.
Lady K and I are chilling with a couple of chickie days thanks to school assessment today and a teacher work day tomorrow. We plan on seeing a couple of movies tomorrow, 'Prom', 'Hoodwinked 2' or 'Soul Surfer'.
I have a whole bunch of CDs to sort and alphabetize now that all of the shelves Dad made are painted.
I made another call to the 'bee lady' here in Thornton that the bees in our tree were swarming again. I think she'll be back sooner to get them since the last visit she could only get half and then the other half took off and landed in a not as nice place and the owner of the tree they rested in came out and sprayed them with insecticide. I don't want the rest of these to get the same treatment.

thank you for posting the tour with Kat!! That was excellent!

Leia and Catfriend have very eloquently given both sides of the Nook debate. I haven't gotten an ereader yet so the juries still out for me.

Leia, glad to be of help in your time of stress!! :-) And if I can take credit for your graduating, I'll happily do it!

So, Vickie, do you work for Lockheed or Boeing or NASA??? I didn't know that you were in the rocket biz. So's my husband.

I hope you save your bees! And have fun at the movies. Wish I could go with you.

I wanted to go to the Steampunk con in SD but it being over mother's day just doesn't work for me.

The tot was telling me the other day how much she missed you.

~Suzi and the tot, too

I'm so excited to hear about the new nook function. It sounds so much easier than those other e-signing ideas. I knew nook beat kindle, mostly cuz I own one, but still...

Hey Suzi-- give the tot a kiss for me! And Happy Mother's Day!

Hey Julie-- glad you liked the post! thanks for stopping by.

J: DH and I both work for Lockheed. Met DH at Vandenberg AFB CA as active duty Air Force and moved here, retired, and now do basically the same job as contractors.

We saved the bees...
http://iyamvixenbooks.blogspot.com/2011/05/bee-lady-comethsaving-beesone-swarm-at.html

Vickie-- posted a comment on your blog. Quite an adventure!! Glad you're all right. Looks like Lady K was fascinated!