Wednesday, April 27, 2011
Videos, Books and a Witch Hunt...oh my! Hi all-- I'm starting off with a video sent to me by pal Lizzie T. Leaf because I happen to be in the editing stage of my novel now and I know just what this feels like!

A lot of different things caught my attention this week.

Penguin (but not really, read on) is launching something new.

Penguin has launched a beta version of Book Country, "an active community of writers, readers and experts" in the field of genre fiction. The New York Times reported that in its initial phase, the website "will allow writers to post their own work--whether it’s an opening chapter or a full manuscript--and receive critiques from other users.... Later this summer the site will generate revenue by allowing users to self-publish their books for a fee by ordering printed copies. (The books will bear the stamp of Book Country, not Penguin, and the site is considered a separate operation from Penguin.)."

Ever wonder where and if typewriters are still made? Well, this was from the Daily Mail U.K
The end of the line: Last typewriter factory left in the world closes its doors India-based company has just a few hundred machines left in stock

It's an invention that revolutionised the way we work, becoming an essential piece of office equipment for the best part of a century.

But after years of sterling service, that bane for secretaries has reached the end of the line.

Godrej and Boyce - the last company left in the world that was still manufacturing typewriters - has shut down its production plant in Mumbai, India with just a few hundred machines left in stock.

But wait-- not so fast: From Gawker

Rest easy, annoyingly hirsute hipster Luddites loitering at local cafes: The typewriter is alive and well. How do I know? Well, because I looked on Staples' website. But don't take my word for it. Let's check in with a typewriter manufacturing expert:

"We have manufacturers making typewriters for us in China, Japan, Indonesia," Michael says. "We have contracts with correctional facilities in 43 states to supply clear typewriters for inmates so they can't hide contraband inside them," Michael explained.

Clear typewriters for inmates? That's a good use for technology.

This next is timely because I happen to be watching Doctor Who right now courtesy of Netflix.
(Yes, Mario, I can multi-task)

Doctor Who season six starts this week, and there are so many reasons to be excited, including Mark Sheppard and more River Song. But there's also the fact that award-winning fantasy author Neil Gaiman has written one episode. ..

Gaiman's episode, titled "The Doctor's Wife," will air during the fourth week of this season, and is set in a spaceship graveyard.

Thinking of a June steampunk wedding? Check this site out : 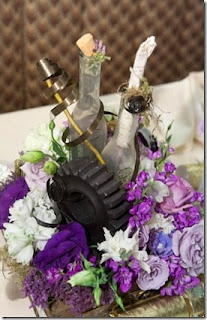 As you might remember, I am (was) a huge Robert B. Parker fan. I will withhold comment on this until I see the first book.

(Newser) – The two most famous creations of late crime novelist Robert B. Parker will live on. His estate will allow two writers to continue the Spenser and Jesse Stone novels, reports Publishers Weekly . Michael Brandman will take over the Spenser series, which debuted in 1974 and now number 39. Ace Atkins gets the Jesse Stone novels (1997, nine tomes). Meanwhile, the last novel Parker completed before his death last year, Sixhill, will be released next month, notes the AP.

Can I volunteer to write the Sunny Randall series?

Since I'm feeling a bit nostalgic now, let's end with this:

What caught your eye this week?

PS - Okay, this came up and I had to include it. Can you believe this?

So why was the nosy mother investigating the teacher anyway? And why tell her son? Teachers aren't supposed to have a private life? She should decide whether she wants to teach or write???? If it wasn't so absurd and insulting, it would be funny. I hope Judy Mays sells a million books.

Had to add this-- from one of my fellow bloggers at the League of Reluctant Adults, Sonya Bateman:

The news site, WNEP, has a separate page for comments on the article. It's
absolutely flooded with people, including a lot of Judy's current and former
students, taking this "news" outlet to task for a shoddy, inflammatory piece
of reporting -- and speaking out in support of her, and against the idiots
who complained in the first place.

(linkage for anyone who has a few hours to lose:
http://discussions.wnep.com/20/wnep/wnep-sny-parents-buranich-english-teache
r-writes-racy-novels-20110426/10?page=1)

I read through a bunch of them yesterday. This one's my favorite:

Teachers: Parents Do Naughty Things On Their Own Time

(Stupidville) Today, teachers discovered that parents have engaged in
sexual activity, alcohol and tobacco use, watched R-rated movies (or worse),
and in some cases actually own items used to enhance sexual pleasure.

"We are entrusting children to these parents who do these... things... when
they are not watching the children. What are these children thinking when
they realize their parents have made the beast with two backs?"

When asked for comment, the children had a unanimous response.

"Ewwww," said young Alice Cooper. "My parents had sex?" Several other
children threw up nearby.

The teachers remained steadfast in their insistence that a parent's private
life is not private.

Comments:
I'm outraged and speechless what is happening to that poor teacher. I'm sorry but she isn't teaching the kids about erotica she's teaching them English. I don't care what a teacher does outside of school because they deserve their own life too. To say she needs to choose is absurd.

I couldn't agree more. In fact, it reminds me of the 70's when gays couldn't admit they were gay and teachers. Makes about as much sense.

I lot of good info here, Jeanne! Thanks for sharing.
I can't wait for the new Dr. Who season!
Cheers

The ignorance of the world is beyond comprehension sometimes. A woman who has another creative outlet that hopefully pays well (and better than teachers get) is under fire from these freaks?
And this news agency thought fit to air this information?
She is not harming anyone, she's adding to her bank account and it sounds like she's a fab teacher to boot.

I thank goodness that we have DVR ability, but I am kicking myself that I missed last night's episode of Dr Who both at work and that I forgot to set the DVR to catch it. At work, someone decided a Rocky marathon would be the thing....an entire 10 hour shift of "Yo!" But there were the shiny buff bods to look at ....and I had my books to keep me company. Thank goodness I had the foresight to bring an extra book in case I finished HAUNTING JORDAN - P J Alderman, paranormal mystery....and I did. So I had great company to keep me from gnashing my teeth with each thwack and bad soundtrack after Rocky 2 or 3...