Wednesday, March 02, 2011
In Like A Lion... Borrowed from Carolyn Crane's Blog, with permission of course, the round-up of March's new releases by members of the Reluctant Adults: 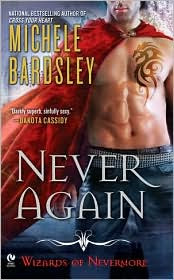 Blurb: Welcome to Nevermore, Texas, population 503, where witches and wizards live side by side with humans, and where witch Lucy Rackmore is in trouble. Ever since her former lover snuffed out her magical abilities, everyone in town is looking to settle a score with her family. And Lucy's only hope for survival may be her ex-brother-in-law-whom her sister betrayed and nearly killed. 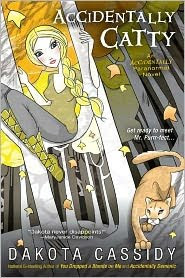 Blurb: Katie Woods never thought she'd be forty-one, divorced, and thrust back into the dating world. To start fresh, Katie uproots her veterinary practice to upstate New York-not exactly the hottest dating scene on the planet. But when an unconscious cougar appears at her clinic, Katie's newly single life gets a much needed jolt of the supernatural kind.

After Katie examines the cougar and leaves him caged overnight, she's shocked to find a big strapping specimen of young, hot man in its place. And when the scratch she got during the exam results in some unnatural side effects, Katie has more to deal with then her animal attraction to a much younger guy-she has to figure how to stop herself from becoming a cougar of the four-legged variety. 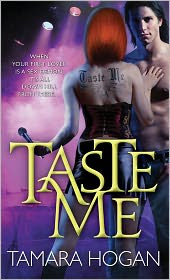 Blurb: Ever since their tempestuous fling years ago, incubus Lukas Sebastiani has known that siren Scarlett Fontaine was meant to be his. But when you're a sex demon with an insatiable desire, relationships are way more than complicated...

Rock star Scarlett Fontaine desperately needs a break after a grueling tour. But with murder and mayhem surrounding her band, and the one man she never thought to see again put to the task of protecting her, life is going to be anything but peaceful...

Every encounter between them creates more turmoil-and heat-until Scarlett pushes Lukas to the boiling point, and unleashes forces that go way beyond anything she can hope to control...

"Wow! This hip, sensual tale about a supernatural rock scene sizzles with forbidden heat and danger. A full-blast start to an addictive new series!" ~Carolyn Crane 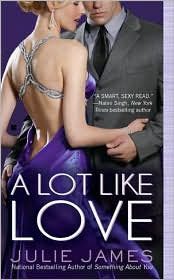 Blurb: THE FBI WANTS HER COOPERATION.
As the daughter of a billionaire and the owner of the city’s top wine store, Jordan Rhodes is invited to the most exclusive parties in Chicago. But there’s only one party the FBI wants to crash: the charity fundraiser of a famous restaurateur, who also happens to launder money for the mob. In exchange for her brother’s release from prison, Jordan is going to be there—with a date supplied by the Bureau.

AGENT MCCALL JUST WANTS HER.
As the top undercover agent in Chicago, Nick McCall has one rule: never get personal. This “date” with Jordan Rhodes is merely an assignment—one they’re both determined to pull off even if they can’t be together for five minutes before the sarcasm and sparks begin to fly. But when Nick’s investigation is compromised, he and Jordan have no choice but to pretend they’re a couple, and what starts out as a simple assignment begins to feel a lot like something more. . .

Hell to Pay by Jackie Kessler (Hell on Earth #4) 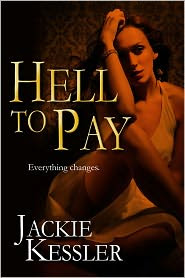 The final installment to a sexy, wild, and wonderful series! Hell's Belles (#1) was one of my first UF loves. So psyched for this wrap-up, and it's just $2.99 in a bold self-pubbing experiment.

Blurb: In this fourth and final Hell on Earth novel, everything changes.

After turning her back on Hell and becoming human, the former demon Jezebel - now the mortal dancer Jesse Harris - is ready to settle down with her true love, Paul Hamilton, and make with the Happily Ever After. But that's not in the cards. Jesse is accidentally wielding her former Hellish power - with devastating results. Another former succubus has targeted Paul. Someone is killing the dancers at Jesse's club. And the King of Hell is leading the world to the brink of Armageddon. All in all, it's not looking good for Jesse, or for anyone she loves. And there's going to be hell to pay.

Read about the Hell on Earth series here.
Available at Barnes & Noble, Amazon and probably lots of other places...$2.99! 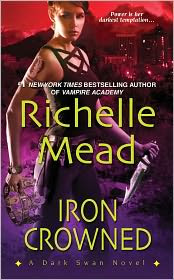 Richelle is unstoppable these days. Not that I want to stop her, considering she is at her full powers of writerly awesomeness.

Blurb:
Shaman-for-hire Eugenie Markham is the best at banishing entities trespassing in the mortal realm. But as the Thorn Land's queen, she's fast running out of ways to end the brutal war devastating her kingdom. Her only hope: the Iron Crown, a legendary object even the most powerful gentry fear. . . 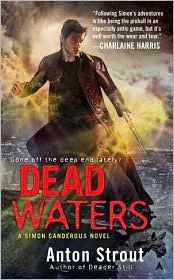 Blurb:
Simon Canderous, of the Department of Extraordinary Affairs, is used to fighting vampires and zombies. But the strange murder of a professor has everyone stumped. And it's making some people crazy. Literally.

“Simon Canderous is a reformed thief and a psychometrist. By turns despondent over his luck with the ladies (not always living) and his struggle with the hierarchy of his mysterious department (not always truthful), Simon’s life veers from crisis to crisis. Following Simon’s adventures is like being the pinball in an especially antic game, but it’s well worth the wear and tear.”
- Charlaine Harris, author of the Sookie Stackhouse series 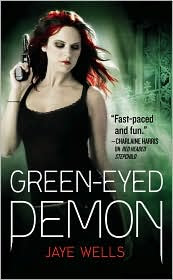 Blurb:
The clock is ticking for Sabina Kane. Her sister has been kidnapped by her grandmother, the Dark Races are on the brink of war, and a mysterious order is manipulating everyone behind the scenes.

Working on information provided by an unlikely ally, Sabina and her trusty sidekicks–a sexy mage named Adam Lazarus and Giguhl, a Mischief demon–head to New Orleans to begin the hunt for her sister. Once there, they must contend with belligerent werewolves, magic-wielding vampires and–perhaps most frightening of all–humans.
But as much as Sabina is focused on surviving the present, the past won’t be ignored. Before she can save those she cares about most, she must save herself from the ghosts of her past.

"From the opening page, the story hurtles along at full throttle. Yet it is not without its funny moments, like the evolution of "Team Awesome." A seriously wild ride! 4.5 Star Top Pick!" ~Romantic Times Book Reviews

Read all about it here

AFTER HOURS: TALES FROM THE UR-BAR
Anton Strout, Jackie Kessler and a ton of other awesome authors have stories in this. 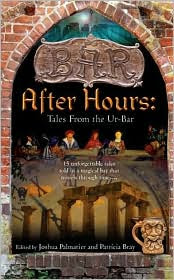 Blurb:
Science fiction and fantasy readers have long shown an affinity for a good "bar story". Now some of today's most inventive scriveners have decided to tell their own tall tales-from an alewife's attempt to transfer the gods' curse to Gilgamesh, to Odin's decision to introduce Vikings to the Ur-Bar, from the Holy Roman Emperor's barroom bargain, to a demon hunter who may just have met his match in the ultimate magic bar, to a bouncer who discovers you should never let anyone in after hours in a world terrorized by zombies.

Those who Fight Monsters
Heads up: Jackie has a Jezebel story in this! I really like the cover, too. 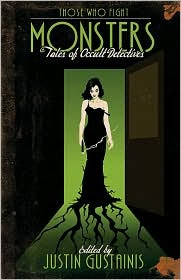 Blurb:
Those Who Fight Monsters: Tales of Occult Detectives, is your one-stop-shop for Urban Fantasy’s finest anthology of the supernatural. 14 sleuths are gathered together for the first time in all-original tales of unusual cases which require services that go far beyond mere deduction!

Whedonistas: A Celebration of the Worlds of Joss Whedon by the Women Who Love Them (featuring Jeanne Stein, Jackie Kessler, Sharon Shinn and others!) 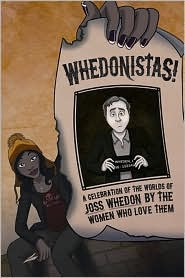 And an extra one that happens also to contain a story by moi: 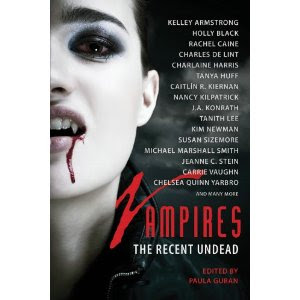 Blurb: The undead are more alive today than ever. Immortal? Indeed! Nothing has sunk its teeth into twenty-first century popular culture as pervasively as the vampire. The fangsters have the freedom to fly across all genres and all mediums - there's even apps for vamps. Whether roaming into romance, haunting horror, sneaking into science fiction, capering into humor, meandering through mystery - no icon is more versatile than the vampire. Slack your insatiable thirst with the best sanguinary stories of the new millennium: terrifying or tender, deadly or delicious, bad-ass or beneficent, classic or cutting-edge.

Okay, that should keep you in reading for awhile. BTW, Carolyn is having a contest on her blog and the winner gets his/her choice of March's new releases. So hit that link at the top and have a go...

Next week: pics from CondorCon and an Oscar party I attended....no, not a HOLLYWOOD Oscar party but almost as good....  ¶ posted by Jeanne Stein @ 3:36 PM

Comments:
Oh noooo! I didn't get in one of yours, Jeanne!! Thanks for the shout for my contest!

Hey Carilyn--do not worry. You did an awesome job!!

A whole bunch of additions to the WWBL! Thanks Jeanne and Carolyn!

I got Caitlin Kittridge's "Iron Thorn" over the weekend. It looks good -- now to find time to read it.

Oh, so the tot was watching Firefly with us. She turned to me and goes "So, this is like Star Wars with na magic?"

Have a great week

~Suzi and the tot, too