Wednesday, January 05, 2011
Back in the saddle... Wow--it's harder to wrap my brain around work than I thought. It's amazing what a couple of weeks off does to the work ethic. I got kind of used to being on holiday.

But it's a new year and I've got a new book to write so here's me jumping back on the wagon.

Speaking of books, heard from my pals at Mysterious Galaxy and Chosen made the best seller list for the year. Thank you San Diego.

Mysterious Galaxy was also featured in this nice piece on Shelf Awareness just this morning. 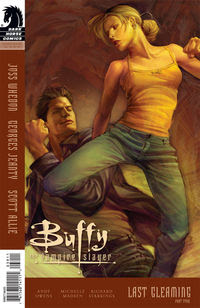 It's been awhile since I had any info on the Whedonverse. Are you following Buffy Season Eight? I don't want to give away too much, but if you're interested in a shocker, check out what happens to Ripper.

The Internet exploded in anger Thursday at news that Warner Bros., Atlas Entertainment and Vertigo Entertainment are planning a new Buffy the Vampire Slayer film without Joss Whedon, maestro of the 1992 film and 1997-2003 TV series.

Whedon himself fanned the flames, advising fans to "leave me to my pain" in a witty missive.

But Whedon was offered a chance to be involved with the new Buffy — and passed.

According to studio insiders, he was approached last year after Buffy rightsholder Fran Rubel Kuzui and husband Kaz Kuzui began developing a remake with Vertigo. After presented with the opportunity, Whedon decided he’d rather work on other projects (he’s making Marvel Studios’ The Avengers). Producers then began searching for a writer and late last year hired actress-turned-scribe Whit Anderson. The unknown Anderson, with only bit film appearances to her credit, came up with a take on the Buffy myth that was strong enough after a couple of drafts to lure Atlas, which partnered with Vertigo to set it up at a studio.

Fox, distributor of the 1992 movie, had first crack, but passed, so Warners slid in, betting that Whedon or no Whedon, Buffy can still slay at the box office.

Following her 2002 acting debut on "Angel," Summer Glau has starred in the kind of TV series and movies that prompted fanboys to call her the new queen of sci-fi. Glau has appeared on cult favorites such as "Firefly," "Terminator : The Sarah Connor Chronicles" and "Chuck," but on Jan. 9, her new series, the superhero drama "The Cape," premieres on NBC. And her starring role as Orwell — an all-seeing, tech-savvy superheroine — will not only cinch that "queen of sci-fi" title but also mark her greatest opportunity to win the hearts of mainstream TV audiences. Wonderwall visited Glau on the set of "The Cape" for a chat about her background as a dancer, becoming a superhero and her loyal fans.

WASHINGTON — A former Defense Intelligence Agency officer whose Afghan memoir was belatedly censored by the Pentagon filed a lawsuit on Tuesday seeking to have the book’s full text restored in future printings.

In September, the Defense Department spent $47,300 to purchase and destroy the entire first printing of “Operation Dark Heart” by Anthony A. Shaffer, asserting that it contained classified information.

The book was hastily reprinted with many passages blacked out and has become a best seller. But unredacted advance copies of the book, among a few dozen distributed by St. Martin’s Press before the Pentagon’s intervention, are still for sale on eBay for $1,995 to $4,995.

Read the full article here . I think Mario should have included some secrets in Nymphos.

And for my fellow writers who need a bit of inspiration for the new year, a collection of rejection letters received by bestselling authors. Some pretty well known names among them. Go here .

Talking about inspiration, here's what Hemingway's first editor told him at the Kansas City Star: "Use short sentences. Use short first paragraphs. Use vigorous English. Be positive, not negative." Hemingway later referred to that list as "the best rules I ever learned for the business of writing."

Sounds like good advice to me, too. Here's to a new year of powerful writing.

Lynda Hilburn's VAMPIRE SHRINK, DARK HARVEST, and an untitled third book in her Kismet Knight series, featuring a psychologist who treats vampires after being drawn into their secretive and seductive lair, originally published by Medallion Press, and which found success as No. 1 sellers in Kindle's vampire romance and ghosts & fantasy categories, to Mark Smith for republication by Silver Oak in the US (Quercus's new line with Sterling) and Jo Fletcher Books/Quercus in the UK, by Robert Gottlieb at Trident Media Group (world).

Well deserved and about time!!

Right back at you! Thank you for being a pal!!

Thanks for the mention, Jeanne! Good news is such fun to share.
Lynda Hilburn
http://paranormalityuniverse.blogspot.com

Congratulations Lynda. Your books are great. You are the Queen of Perseverance.

And Mario hit it...you are a shining example of perseverance and believing in yourself!!

I actually have been buying Season Eight every month (though come to think of it the comic shop still has my December issue) and I look forward to them starting Season nine soon. I also plan to watch the cape. Here's hoping it is successful, well written, and has a long tv life.

Hi Leah-- I can't even begin to wonder where they'll go in season nine. There have been so many shockers this time!!

Mario and Jeanne: LOL. I don't know if I was persevering or being stubborn! I thought I was just going to make a little extra money on Kindle when I put my e-versions up. Who knew that would be the turning point? Thanks for your support!
Lynda

Mario: Did you see this in the Boulder Camera? Stephen Jones is a serious cutie. It was cool to meet him at the panel we did.

@ Jeanne - I have no clue where they will go either. I still feel like there are enough unanswered questions though that I'm sure they'll find something. I still have to get the last issue and that clearly will wrap up the big stuff. There are some smaller things that only got mention once or twice this past season that I'm not so sure about. I'm running behind b/c of the hectic nature of last semester, but will be picking it up next week after this snow goes away ... again.

Btw, thanks for the 2011 calendar. It arrived in the middle of a frantic, stressful writing frenzy and brightened my day just enough to help me push through another blasted paper.