If you're a writer, the gossip is all about what you are doing as part of National Novel Writing Month. The goal: 50,000 words in 30 days. Simple math breaks it down: 1666.66 words a day. Doable, unless you slog at the keyboard like I do. For me, 1500 words in one day is a huge deal and frankly even that pace wears me out after a few days. Thanks God for Happy Hour to recharge the batteries. 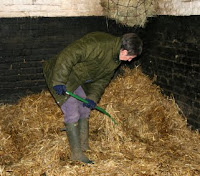 Now in full disclosure, I'm not really participating in NaNoWriMo because I have a manuscript due before Thanksgiving and I'm about ten chapters shy of finishing. And unlike NaNoWriMo which discourages you from editing if it interferes with the word count, I can't turn in my manuscript without beating it with my harshest editorial club. If you're intimidated by the blinking cursor on your monitor, there's a saying to help prod you into starting those first words: Give yourself permission to write crap. Well my first draft is so full of crap that I have to wear rubber boots and muck out my writing space every afternoon.

For the rest of you NaNoWriMo-renos, try these strategies to keep the words flowing: 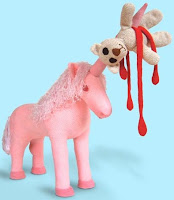 Write what you love. Unicorns, cupcakes, serial killers, old flames you'd like to see baked into cupcakes by a serial-killer unicorn, have at it.
And conversely, challenge yourself to write something different.
Keep plenty of hot drinks handy, especially coffee.  Especially coffee. I don't consider that I've got a buzz going unless my teeth are chattering.
Steal! And by that I mean shamelessly take from every experience. Car wrecks, rejection, watching a foe get his due, anything and everything is manuscript fodder. You know you're doing it right when your BFF is laying out her heart about her cheating rat-bastard boyfriend, then she gives you a look and asks, "You're going to use this in your story, aren't you?" And because you write fiction, you lie and tell her, "Of course not." But you will. Good writer.
We even have a theme song and music video, so we must be official!
>
Over at the League of Reluctant Adults, we welcome a new member, Kevin Hearne, and we're busting at the seams with pride over his debut novel, Hounded. Unlike the rest of us mortals, he didn't get an ARC but an ARE, Advance Reader's Edition, because he is Mr. Hearne and so very special. Awesome cover. 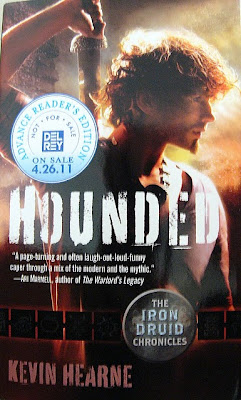 And there's more about another Leaguer, 10 Things You Didn't Know About Carolyn Crane, over at the Amber Scott Project. Among other things, Crane was a licensed boiler engineer and wrestled rooms full of sweaty men. Click through for details.

Comments:
Denver also has it's own NaNoWriMo Theme song.

Michelle: Great stuff. Thanks for sharing.

I'm not doing NaNo--I was about 60K words into a manuscript so starting a new one seemed pointless. I am seeing how my daily word count matches the NaNo pace, but I know I have to go back and tweak and edit as I write. My goal is always to end the first draft with a nearly polished manuscript, and I'm SO not a write-straight-through person.

Hhm. I would like to see: old flames you'd like to see baked into cupcakes by a serial-killer unicorn. I'm inspired to write a new story! :) I'm also doing my own personal type of NaNoWriMo because I can't do the 60000-words and as one of my critique partners says, the official NaNoWriMo forums, etc. are just too much. Good luck on your writerly efforts!

Dude. Smoking hot cover on that book. I'm going to read it based on that alone...but then I would.

I'm at about 2K words a day on one project. Yesterday I didn't write but I plotted two books, so that kinda counts. Then I have another project I'm revising and a short story. So I think I'm busy enough by now...

I'm doing NaNo, first time ever. Signed on at last minute to kick one of the novels out of my head. So far I'm on schedule, but consistently cranking is the big challenge. What helped me in the first week was writing in 500-word blocks at a time, followed by a break. "The book is stupid," Critical Voice whines. "Shut up, just type," I reply. The next day, much to my surprise, it's not as stinky bad as CV insisted. (And when I re-read, I have a rule: I can add, but I can't delete.) And oh yeah, buddies really help!

Terry: I know, my deadlines keep me from participating.
Lesley: the cupcakes are in the oven.
Becky: I figured you'd go for the dude. Why am I not surprised?
Rebecca: Bribe the Critical Voice with a martini. Works for me.

Anyone who knows me knows that I'm 180 degree out of phase with the rest of the world, so keep that in mind before my "against the grain" statement.

I don't get Nanowrimo.

It irritates me to put all the capital letters in the term for the weird contraction of words.

I'm always in anyone's corner who can get published, but the idea of a program forcing you to write says that you're no more a writer than a kid gaming on Guitar Hero is a guitarist.