Sunday, October 17, 2010
Hard-boiled and Fantastic, three of our favorites, with an angel
Mario here:

It's fitting that in this time of magical make-believe and scariness that we announce that Biting-Edge ex-pat Marta Acosta ties up her Casa Dracula series with her newest book, Haunted Honeymoon.  Booklist calls this story, "A satisfying wrap-up to a snappy supernatural series." Drop by VampireWire and tell Marta that the Biting-Edge sent you.

Also, Carolyn Crane, one of  our buddies from the League of Reluctant Adults, has a giveaway on the Borders True Romance blog. Answer a simple multiple-choice test and you too could win a set of the Justine Jones urban fantasy novels, Mind Games and Double Cross.
The supernatural is more than vampires, demons, and monsters. We also have the occasional angel. But having wings may not be all you expect it to be. As shown here: 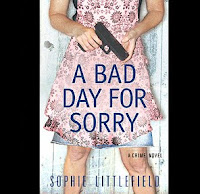 And moving outside the orbit of urban fantasy and the paranormal, we're super pleased to give the news that Pens Fatales author Sophie Littlefield won an Anthony Award at the BoucherCon Mystery Writers Conference for Best First Novel for her book, A Bad Day for Sorry. 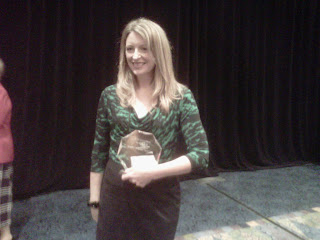 We heard there was a wrestling match between Sophie and her agent, Barbara Poelle, for the award. While we normally wouldn't pass along such gossip, we have a picture. 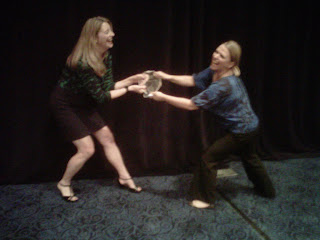 Comments:
thanks so much for the mention, Mario!! Barbara's tough, but in the end i was able to wrest back the award...what a fun morning!!

That is an awesome final picture.

I thought Sophie's naked cat fight in the fountain was even better, but sadly, there aren't any pics...

Sophie: I knew you'd win.
Leia: an awesome picture, yes, but according to Juliet Blackwell, there was a better fight.