Wednesday, September 08, 2010
The week after... a book release is a nerve-wracking time. To writers and readers, it's a new book. To the publishing world, it's business. The bottom line above all. Well, it looks like Chosen is doing well enough to have made #16 on the bookscan list for fantasy. A nice beginning and a reflection on the loyalty of Anna's readers. I thank you all.

I'm still in promo mode. DragonCon last weekend was fun but exhausting. I came down with a head cold the day after I got back and since I have two more trips and signings coming up, I'm laying low this week.

Friday at 7:30 Mario and I will both be signing at the free open-to-the-public Colorado Gold signing fest. It's held at:

If you are interested in dissecting writing styles, Margie Lawson, teacher extraordinaire, used Chosen as her deep editing analysis for the week. Check here . If you are an aspiring writer, subscribe to her newsletter. She knows her stuff.

Something else you might want to look into-- Writer's Digest 101 best sites for writers. 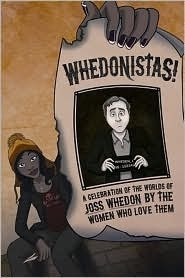 I'm part of an anthology entitled Whedonistas--women who love the Jossverse--along with Elizabeth Bear, Sharon Shinn, Emma Bull, Nancy Holder, Jackie Kessler and more. Whedonistas will be out March 2011 via Mad Norwegian Press, but is available for preorder now at Amazon . I love this cover!

The contest is still going on over at Larissa's Bookish Life. Check it out . Contest runs until September 10th.

Universal Pictures and NBC Universal Television Entertainment will adapt Stephen King's Dark Tower novels into a film trilogy and a network TV series. Deadline.com reported that the project, which had been in discussion last spring (Shelf Awareness, May 4, 2010), "will be creatively steered by the Oscar-winning team behind A Beautiful Mind and The Da Vinci Code. Ron Howard has committed to direct the initial feature film, as well as the first season of the TV series that will follow in close proximity. Akiva Goldsman will write the film, and the first season of the TV series. Howard's Imagine Entertainment partner Brian Grazer will produce, with Goldsman and the author."

Deadline.com compared the project--which will use "a major studio's film and TV platforms simultaneously to tell a story"--to Peter Jackson, who "directed three installments of the Lord of The Rings, back to back, so that they could be released in three consecutive years."


This will either be very good or a disaster.


I'm watching Wiseguy-- the series starring Ken Wahl created by Stephen J. Cannell in 1987. Got it on Netflix and I love it as much now as I did when it first came on. Have any of you seen it? Television at his best.

Oh, and one last thing. I'm still waiting for someone to explain the ending of Clooney's new movie, The American.

SPOILER ALERT
If his handler wanted him dead, why did he kill the girl BEFORE she shot him? WTF??? My husband and I left the theater shaking our heads. We should have gone to see Machete. Danny Trejo is who Phil thinks would make a great Culebra.

Re the American (which my 'rents and I HATED), the handler didn't kill the girl. Before he turned over the suitcase, in the last minute before he left his apartment the clooney character paused and opened up the case. He did something to the gun to cause it to backfire and take her out.

Whoa, Gina-- makes sense. You are much more perceptive than I am--although I did figure out that the gun he was making was going to be used to kill him. It didn't dawn on me that he knew it, too!!!

No it sucked eggs. Back into the chicken, who imploded in misery. I've long stopped liking Clooney movies and this sure didn't fail to disappoint me there.

Leave it to me to spoil the festive mood. ;-) see you tomorrow.

I concur, Danny Trejo is the perfect Culebra. He is who I see when I read any scene with C in it. He's the only one I've cast in my cranium-vision.

REALLY looking forward to WHEDONISTAS....It's going on the pre-order tomorrow.

For you cold, drink a lot of mint tea. It's the catch all cure all. Celestial Seasonings sells an Echinachea tea that I drink during the winter when cold seasons starts arriving. It seems to help.

My thoughts on Dark Tower (which I still have yet to read!) - If it is done by the right person, then it will be good. If it's not ... then you will get the new SyFy series "Haven." I love Haven for how amazingly awful it is (you have to appreciate that kind of initiative) and the dude who was Jesse in Buffy's 2 part pilot, but I would hate for that to happen to Dark Tower given its reputation as a quality book series. I think Ron Howard would do a good job, but Akiva Goldsman has some truly heinous screenplays in their name (Batman & Robin, 98's Lost in Space, 04's Starsky & Hutch, Jonah Hex and Constantine anyone?)

I have not seen The American, but Clooney, like Brad Pitt, is an actor I avoid like the plague unless I have a very very good reason to do otherwise.

We hope you feel better.

The tot and I were having a conversation about books recently which ended with her going "But Ann's better."