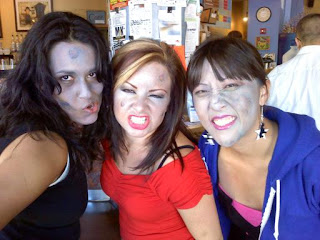 But first, can a Sunday morning get any better than zombies at the coffee shop?  These undead beauties from the Denver Roller Dolls were on their way to a publicity shoot and obliged me a photo before they tried to eat my brains. 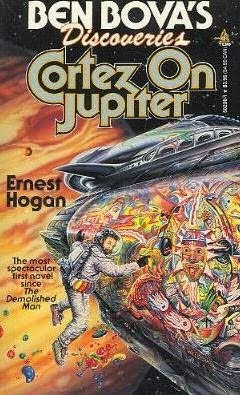 We'll start with Ernest Hogan, the most unknown Chicano author.  Hogan was "discovered" by acclaimed science-fiction author Ben Bova and started out with his cultural mosaic futuristic novel that mishmashes border Spanish with Nahautl in Cortez on Jupiter.  Follow his tribulations in literary obscurity on La Bloga, interviews Part 1 and Part 2.
Who got lucky?
I got lucky... 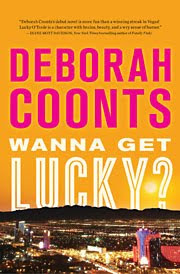 this weekend when I met Deborah Coonts, author of Wanna Get Lucky, her debut novel. Coonts is getting scorching hot reviews about the Las Vegas adventures of Lucky O'Toole, the snarky head of customer relations of the Babylon hotel. Somebody falls to death from a helicopter into the pirate's lagoon at Treasure Island, kick-starting the action that shoves Lucky into characters from a swingers convention, an Adult Film Industry award's banquet, and a brothel, of which her mother is the madame. Naturally. And her best friend is a female impersonator, who decides that (s)he wants to be more than chums with Lucky. A host of handsome studs put Lucky's libido in overdrive and her judgement in reverse. Lucky doesn't feel too lucky but you will reading this story. 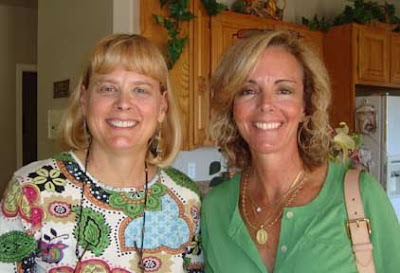 Beth Groundwater (left) and Deborah Coonts at the Rocky Mountain chapter of the Mystery Writers of America summer pot luck. 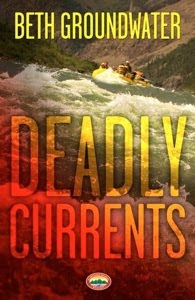 Groundwater was nominated for an Agatha Award for her debut novel, A Real Basket Case, followed that with: To Hell in a Handbasket; a sci-fi novella, The Epsilon Eridani Alternative; and is set to release the first of her Rocky Mountain Adventures series, Deadly Currents, in March 2011.  She proves that luck is often disguised as hard work. 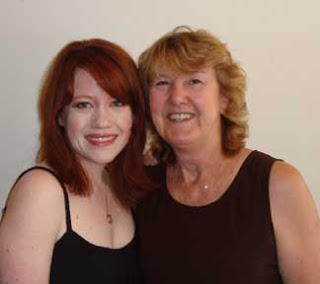 The luck continued at breakfast with NYT bestselling Richelle Mead and her hubby Jay, in Denver on family business.  Here she is with our own Jeanne Stein, still astounded by my amazing parking skills. 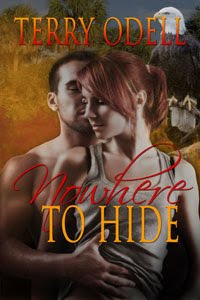 Terry Odell shares the luck, and the love, in her newest romance Nowhere to Hide.
Now over at the Chiseled in Rock blog, Dave Jackson and Betsy Dornbusch, dish on another way to get lucky in this crazy publishing biz.

Comments:
Thx for the linky love. :) Dave's doing a good job with that blog, eh?

That's a whole lotta cool luck. Off to add WANNA GET LUCKY to the WWBL, thanks for the cranium's up.

Dave is doing an amazing job. He deserves a raise.

I'm down to the last few chapters of Lucky, and lovin' it.

Deb did a workshop in the Springs a couple of weeks ago that went over very well.

I think Dave Jackson is a Superman, OK, except for the red S... he's easily worth 3 or 4 times what he's paid.