Monday, August 30, 2010
Survived the geeky Bubonic Plague
Mario here:
I barely survived this year's Bubonicon (yes, named after the bubonic plague, and the mascot is Perry the Rat). Con number 42. The first one was held in 1969. Where were you then?
Unfortunately for us, the hotel was undergoing renovation, which meant the restaurant and the bar were closed. Horrors! But the local contingent of Trekkies sailed to our rescue. Details further on down. 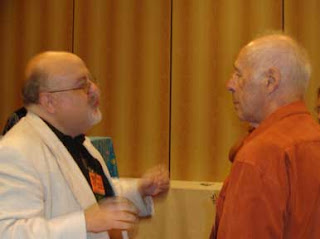 Jeanne decided to show her appreciation for Bova's work by giving him a lap dance. 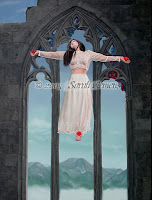 Guest artist was the amazing and magical Sarah Clemens. 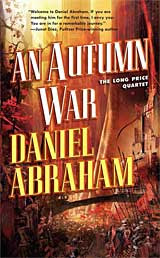 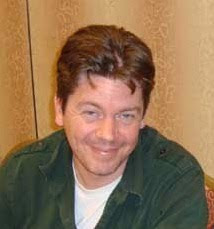 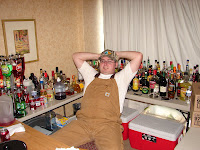 While we had plenty of exciting panels, the main action was on the second floor of the hotel. Thanks to the NCC-62001 Anasazi, and crew member Phillip Dillard, we had enough booze to survive any Romulan siege. Jeanne kept herself well fueled with Cape Codders for those lap dances.
For an eyeful of the con shenanigans, click HERE. 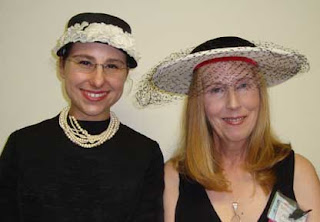 To offset the Saturday night craziness, the con ended with a Sunday Authors Afternoon Tea. Pure class as you can see by the appropriately dressed Sussane and Nancy.

Jeanne's first signing for her newest book Chosen is this Wednesday at the Highlands Ranch Tattered Cover, 7:30pm. 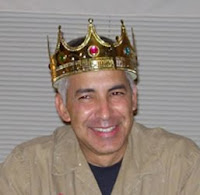 This Thursday I give up my WOTY crown to the next Rocky Mountain Fiction Writers' Writer Of The Year, Pamela Nowak. Ceremonies at the Tatttered Cover LoDo, 7:30pm.

And I have a signing for my comic book, Killing the Cobra, this Saturday, September 4, 1-5pm at Heroes Only Comics in Cheyenne, WY.

Comments:
The first one was held in 1969. Where were you then?

I wanna go next year!