As it gets closer to the publication date of Chosen, I'll be posting more links to interviews and contests with the aim of promoting the new release. It's not my favorite thing to do, but necessary if I hope to sell books. And believe me, in this business, that's what it's all about. But this week, it's really something fun. Bitten By Books has a poll up where you get to choose your two favorite UF covers of 2010. Chosen was nominated! So take a minute, go here and vote--hopefully one of those votes will go to Chosen. Since I'm not above bribery, here's the deal. If you vote (and I'm trusting you here that you'll vote the right way) and spread the word on your own blogs and Facebook pages, tell me and I'll choose from those who participated in a random drawing for a prize!!! Poll and contest end on Sunday at midnight.

A friend sent this-- Nathan Fillion at ComicCon reading a sex scene from "Castle's" book. I think you'll enjoy this.

My publisher is celebrating seventy-five years in the business. If you'd like to learn more about the evolution of the Penguin, Shelf Awareness did a nice issue here .


Have I already mentioned Richelle Mead’s Vampire Academy is going graphic? Here’s the cover for the first: 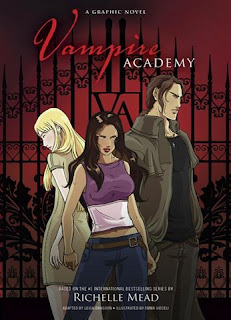 And a nice mention in Shelf Awareness: Richelle Mead, author of the Vampire Academy series, announced that in summer 2011, she will launch graphic novel adaptations of the books--published by Razorbill, an imprint of Penguin Young Readers Group. The novels will be illustrated in full color by Emma Vieceli and adapted by Leigh Dragoon, with Mead overseeing all aspects of the graphic novel editions. The original series will conclude on December 7, 2011, with the sixth and final installment, Last Sacrifice.

For aspiring writers, there'a a new spot to go if you have publishing questions. Six Questions For.. gives you a chance to ask editors, publishers, agents, educators and writers anything-- at least according to the press. Try it here

Writer's Digest puts out a newsletter, too, that always has good stuff. No need to subscribe to the magazine to get in on the newsletter. Email : writersdigest-newsletter@fwpubs.com

This went out over Facebook and was picked up faster than a rabbit gets...well, you know. 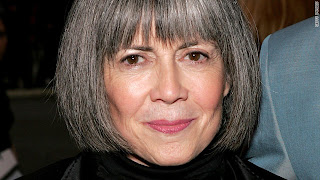 Anne Rice, the “Interview with a Vampire” author, who wrote a book about her spirituality titled "Called Out of Darkness: A Spiritual Confession" in 2008, said Wednesday that she refuses to be “anti-gay,” “anti-feminist," “anti-science” and “anti-Democrat.”

Rice wrote, “For those who care, and I understand if you don't: Today I quit being a Christian ... It's simply impossible for me to ‘belong’ to this quarrelsome, hostile, disputatious, and deservedly infamous group. For ten years, I've tried. I've failed. I'm an outsider. My conscience will allow nothing else.”

Rice then added another post explaining her decision on Thursday:

“My faith in Christ is central to my life. My conversion from a pessimistic atheist lost in a world I didn't understand, to an optimistic believer in a universe created and sustained by a loving God is crucial to me," Rice wrote. "But following Christ does not mean following His followers. Christ is infinitely more important than Christianity and always will be, no matter what Christianity is, has been or might become.”

I think I agree with her. What about you? 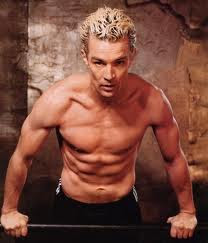 And because I cannot resist anything Spike, one of our colleagues, Brad is running a hottest vampire series . He also says, "We need funny contributing writers. If anyone's interested, shoot me at bradmouth@gmail.com "

I don't know, anyone who can caption a picture of Spike with "I need carbs and protein" is a pretty funny guy all by himself. Spike is perfect, Brad, perfect. Do you hear me????

More dear reader news. Here's Suzanne at RWA National with her comments on the picture: 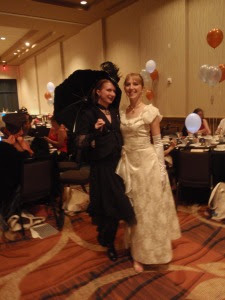 I am convinced that fellow Lolita Leanna Renee Hieber is my long lost sister–and not because people get us mixed up. She was nominated for not one, but two Prism awards. There were a few jokes since she wore all black and I wore all cream. Does that mean one of us is the good sister and one of us the bad sister?

Check out all her comments and pics here :

Suzanne's debut novel, Innocent Darkness, a Steampunk dark fairytale for teens, will be available from Flux in spring/summer of 2012.

I hope I don't have to wait THAT long to read it, Suzi-- hint hint.

Comments:
I voted!! I've been waiting FOREVER for Chosen to come out. I'm even going to put the link to vote up on my blog (that I almost never log into because I'm a bad BAD blogger)

Thanks again for the magnets. They are the only thing on my fridge :0)

Thanks for voting!! Glad you like the magnets, too!

My packet arrived today, thank you so much!!!

I voted!! I love this cover.

I am submitting my pre-order for CHOSEN to my buddy, Cynthia, of High Crimes tomorrow. Times two, one for me and one for my buddy Jenna who has been super swell in Oregon and hooking me up on getting some books signed...a lot of books...

Thank you for the image of Spike...getting ready to go up to bed, so I will have sweet Spike dreams if I am lucky...

Bless Anne Rice's heart. I follow Christ, am a nondenominational Christian. I concur with her thoughts.

I am totally digging the Spike pic.

Today I discovered that the MC in my latest WIP is a "Firefly" fan and and it made me think of you, lol.

I'll have to add chosen to my list of books to buy. Inquiring tots want to know if you'll be signing in our neck of the woods this year. :)