Sunday, July 18, 2010
Sweet action on Broadway and the WOTY changes heads.
Mario here,
The people have spoken.  Specifically, the members of Rocky Mountain Fiction Writers.  I pass the Writer Of The Year crown to a most deserving winner--Pam Nowak.   The announcement was made Saturday at the annual picnic where the temperature felt like we were on the planet Mercury.   The nominees included (l-r) sci-fi author Laura Reeves, Pam Nowak, and the prolific Kay Bergstrom.

Pam is the conference chair (twice in fact) for the annual Colorado Gold Conference.  Her debut novel, Chances, won the Holt Medallion Award and was a Willa Finalist.  Hoo-rah! 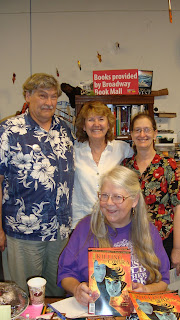 Later on, Jeanne and I were the guest presenters at the Denver Area Science Fiction Association monthly meeting at the Broadway Book Mall.  Ron Else, Jeanne, Rose Beetem, and Nina Else (seated) with a comic from you-know-who.

Afterwords, we decided to cool off and hiked a few blocks to Sweet Action Ice Cream where Jeanne got a little too carried away showing her appreciation for the pleasures of a hot fudge sundae.

On other news, Charlie Huston's novel, The Mystic Arts for Erasing All Signs of Death, has been green lighted by HBO. Those of you with Hollywood experience know this means simply, stay tuned.  Until then, do yourselves a favor and read Huston's hard-boiled prose in a weird, horrific, and funny tale about the people who do crime scene clean-up.

Comments:
I enjoyed your presentation at the DASFA meeting last Saturday, even without the biting commentary.

Hope you have a great time at ComicCon. San Diego's a great place to visit if you ever get out of the hotel.

Biting commentary?--that must have been Jeanne!
We had a great time. And I'll see what trouble I can avoid at ComicCon.

Did you pass Pam the crown?