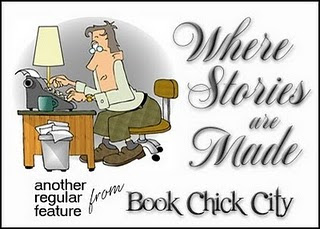 Okay, first-- Book Chick City is doing a series called "Where Stories Are Made" and I'm the featured author this week! Hop on over for a peek at my inner sanctum. It was a fun piece to work on. In fact, you might want to bookmark this site because it's always full of fun things.

Second, July is Sci Fi/ Fantasy month over at Tor. One of my stories, The Ghost of Leadville, can be read for free here . Thanks to editor Heather Osborn for inviting me. Heather and I had some fun at RomCon this past weekend. I believe Mario will post pics on Monday.

Third, I heard from my editor that Chosen will have the largest initial print run of all my books so far...that's good news and bad news...Now the nail biting starts. I have to SELL all those books!!! Thanks to everyone who has preordered. That has a lot to do with how many books they decide to print and I appreciate your support.

And last but not least, next week is ComicCon in San Diego. I haven't had a chance to look over the entire program, but this panel jumped right out at me:

Thursday 3:30-4:30 Entertainment Weekly: The Visionaries— A discussion with geek gods J. J. Abrams (Star Trek) and Joss Whedon (Buffy the Vampire Slayer) on the future of pop culture. EW presents an in-depth conversation with these two creative geniuses about how technology, gaming, and global culture are reshaping how we tell and consume stories on television, film and the web. Plus: Is the superhero movie waning, or is it on the cusp of reinvention? And what do they think the pop culture universe will look like a decade from now? Moderated by Jeff "Doc" Jensen. Hall H

Can you say WOW!!

And speaking of wow, here's my panel:

What a line-up. I can hardly wait. If you'd like to peruse the entire schedule, go here .

I am going to miss my pal Kris Bochum this year, though. She and I had fun star gazing.

Okay--enough about me. How about some screen news?

These tidbits are from Shelf Awareness and Variety:

Television: All Signs of Death

Alan Ball (Six Feet Under, True Blood) will direct the pilot episode of All Signs of Death, which has been greenlighted by HBO. The project is based on Charlie Huston's novel The Mystic Arts of Erasing All Signs of Death. Variety reported that Ball will also serve as executive producer and Huston is writing the screenplay for the pilot, with production set to begin during August in Los Angeles. No cast has been named thus far.

Don Murphy (Transformers) will team with Michael Preger (Village of the Damned) to produce a film version of Richelle Mead's six-part Vampire Academy series for young adult readers, Variety reported.  "The joy of these books is that in the wake of Twilight they offer a chance to create a movie franchise that guys will want to see as well as girls," Murphy said. "Michael and I plan on positioning the films as something both sexes will enjoy together, expanding the genre of sexy young vampires to a whole new audience. We are beginning discussions with studios immediately."

This is great news for pal Richelle Mead because the series was optioned once before by Fox TV and went nowhere. This time it sounds like it's a go. You can catch up with all of Richelle's news here .

And just for fun, a "Which one is right for you?" galley highlighting popular vampires. Guess who my choice is? 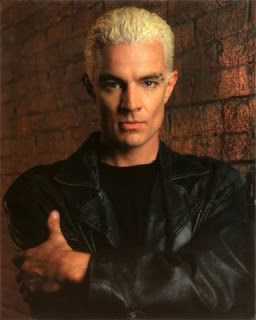 I know, I know, he's getting married. But I guess I'll forgive him that one little transgression...

Sorry Lady K and I weren't there on Sunday. We just got back from our 2200 mile roundtrip from here to Rochester MN and Waubasha and Alma WI then home via I-90 through South Dakota to tour Wall Drug, the Badlands, and Mt Rushmore.....a long trip and then I am big ol' chicken to try to get myself from Thornton to Broadway.....

YAY!! Richelle's books will be on TV! Now let's get Anna on there or on the big screen...

that is all right, Vickie, though you missed the other great authors in that line-up. It sounds like you had a nice trip. I love South Dakota.

I agree== Anna would be nice on the big or small screen. We just have to keep hoping...

Wow, what a great panel. One day we'll have to get down to comic con.

I'm getting ready to do my very first panel on the 30th at the RWA national conference. Wow. I'm a little scared. But I have my steampunk outfit and my hat, lol.

You mentioned squirrels and bunnies on your guest post. The tot has been going to day camp. They combined the "squirrel" group with the "rabbits" and call them "scrabbits." The CITs like to take them outside (they're 5 & 6 year olds) and have them hunt for the ever elusive "scrabbit" (apparently they're fast, lol.)

Have a good weekend.

A scrabbit? Is that any relation to a snipe?

Have a good time at RWA and give us a full report when you get back!!!

First, wouldn't it be great to have Joss AND James Marsters on the same panel, and then grab them aside for a talk, or a picture or anything...LOL

I can't wait for Chosen to come out:) I'll have to get out the other books and reread them!

Oh dear, and I thought I could disconnect HBO and save money once True Blood was over for the year. I guess I'd better get more books sold.

Seriously, I have so many vampire books to read that it makes me bleed. Did I say that?