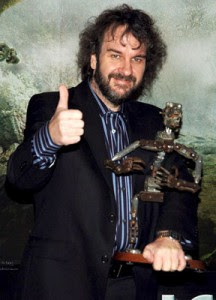 In what amounts to a dream come true for fans of Middle Earth, Peter Jackson has decided to direct two installments of The Hobbit, trusted sources are telling me. His deal is being negotiated right now with Warner Bros , New Line, and MGM. He will shortly take the reins over from Guillermo del Toro, after Jackson extricates himself from other project obligations that caused Jackson and manager Ken Kamins to initially deny he would direct. While Jackson’s camp has been tight-lipped, I’m told that the case is being made to MGM's owners to loosen the purse strings and make the movies happen. The impetus for these talks is that Jackson will be the director of both of The Hobbit films, which will be shot back-to-back in his New Zealand backyard. The secret's out.

And some exciting news about pal Richelle Mead:

Now we all know being optioned doesn't mean a film is immediately forthcoming, but it's a good first step. Congratulations, Richelle!

Okay-- I thought things like this happened only in LA: 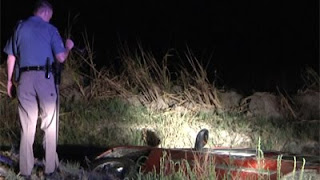 FRUITA, Colo. - If a Western Slope woman is to be believed, vampires may be lurking in Colorado's Grand Valley.

The woman claims she spotted a vampire in the middle of a dirt road near Fruita, Colo. Sunday night. She told Colorado State Troopers she was startled by the undead being, threw her SUV into reverse, and crashed into a canal.

She was not injured.

State Troopers say the woman's husband arrived at the scene and took her home. The vampire, which was not seen by anyone else, apparently let her get away.

Troopers do not suspect drugs or alcohol to be factors in the crash.

Only an active imagination, I say.

Here's a preview of the ad for Chosen that will be in the September issue of Rt Book Reviews Magazine:

Preorder here if the spirit moves you!

Can you believe it's July??? Here are a few events coming up in the next few weeks:

And Mario and I have an event together on July 17--

Saturday, July 17, 7:00 p.m. – Authors Mario Acevedo and Jeanne Stein will be the featured speakers at the monthly meeting of the Denver Area Science Fiction Association. Mario will be signing Killing the Cobra #2, his latest comic book featuring Felix Gomez, the vampire P.I. hero of Mario’s novels. Jeanne will be signing Retribution, the latest in the Anna Strong chronicles. The meeting and program are free and open to the public.

I think that's it for this week. Anything new in your world? Have you seen Eclipse yet? Let us know... 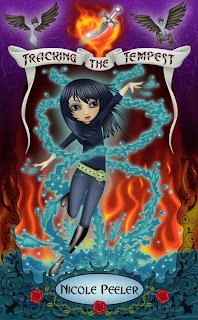 Very quick response as I should have been in bed ages ago ...

1- a friend showed my Snoop Dogg's song last week (not exactly my kind of music so I would have missed it) and I laughed rather hard.

2- Harry Potter! Yay! Now I need to actually read the last book. I've had it in my house ever since it was published but have been putting it off. Perhaps it is my subconscious denying the end of the Harry series.

3- Peter Jackson you toss around like a yoyo. I really really want to believe the news, but at this point I'll believe it when I see it. I PRAY, however, that this is the final word. Part of the problem is that the company New Line is part is is supposedly experiencing financial troubles. Since they currently have th rights to the film I'm just praying the company doesn't go under or this will never happen.

4- Chosen has been pre-ordered since the first day it was available. I'm very much lookign for it!

Also in random vampire TV show news. Back in June, Freemantle announced that they were creating a show based on Tanya Huff's second series of vampire books (the spin off from her very awesome Blood books featuring Vicki Nelson). Of course everything rides on the show being picked up bu a network (I'd settle for a foreign network as long as I could find episodes online). All of us Blood Ties fans have our fingers crossed that this attempt might actually benefit from the current heightened interest in vampires within the general public. We are also hoping that Kyle Schmid will get roped in to reprise his role as Henry Fitzroy as I can't imagine the role being played by anyone else. As one of my friends said, if they had waited even another year and half, Blood Ties would have never been canceled. It was JUST ahead of popular trends and that's really way too bad. So here is to hoping that all the pieces fall into place so that the Smoke books can get their day in the TV sun.

Happy Fourth of July everyone.

Anyone seen Eclipse? the tot is begging to see it, but even tho she's seen the others, I'm just not sure about this one.

Oooh, Comic Con. One of these days I'll have to go down for it. This year it just happens to be days before the RWA national conference (and my very first panel I'm speaking on, yay!)

Will you be doing any signings in Los Angeles when Chosen comes out? We missed you last year (we were on vacation)

Hey all-- remiss in answering. Blame it on the full moon (what? no full moon? I meant fool moon, of course.)

Ellie. Anyway, I am keeping my fingers crossed about Peter Jackson but am a little skeptical, too.

Leia. Good news about Tanya Huff's proposed series. I'll keep watching for news and if you hear anything, let me know.

Suzi. ComicCon is always fun but a madhouse. One thing that will make it a little LESS fun for me this year, pal Kris Bochum can't make it. We always have so much fun stalking Joss Whedon. I'll have to stalk solo this year (unless I can talk Mario into stalking with me)

Jeanne, do you really stalk him? That is awesome. I have a standing dare to ask him to blog on Steampunk over at my group; steampunk blog (I have no idea what he thinks about Steampunk, lol). I'd totally ask him if I ever met him or knew how to contact him, lol.