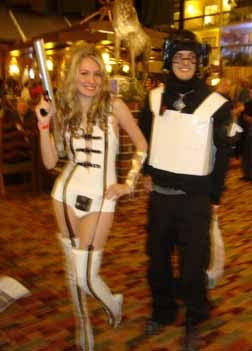 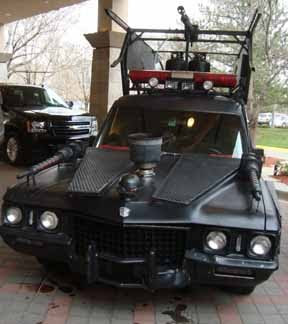 Barely survived a thoroughly kick-ass weekend at StarFest.  The costumes were amazing, from the cartoonish to the scandalous.  As if hand-crafting costumes wasn't enough, for many attendees a ride to fantasyland needs the necessary wheels.  Is this a blind date ride or what! 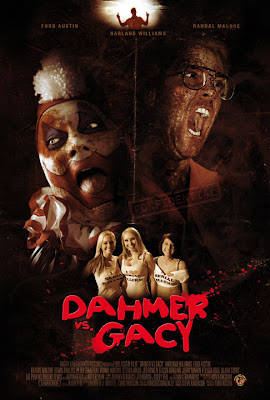 I reconnected with many friends in the horror biz, to include actor/director/writer/producer Ford Austin.  His latest offering is the comedic and over-the-top splatterfest, Dahmer vs Gacy.  The movie includes a  cameo appearance (as a rat-noshing homeless murder victim) by Del Howison, owner of Dark Delicacies. 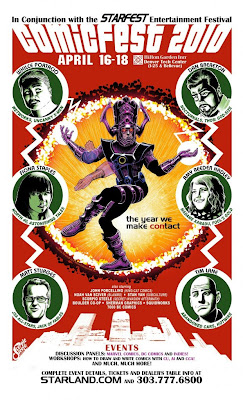 I've blogged about my comic book, Killing the Cobra, and so attended ComicFest to meet local vendors and other artists.  Got an excited response all the way around.
And just in time for the Zombie Apocalypse:
Martial arts instructor Brent Bingham offered a workshop on Zombie Defense Tactics. 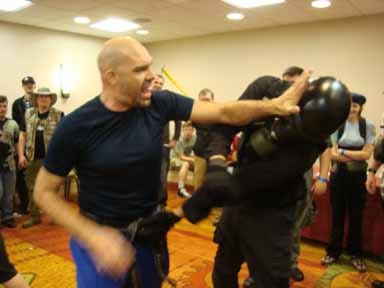 Bingham showing how to deflect and redirect a zombie attack, followed by a skull crushing blow--the only sure way to dispatch a revenant attacker.
The workshop included hands-on takedown exercises.  The ladies were quite enthusiastic in learning the combative skills to avoid becoming meat snacks. 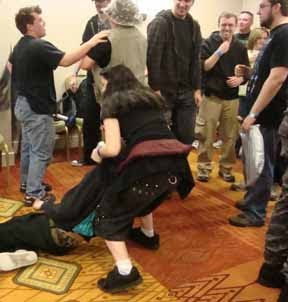 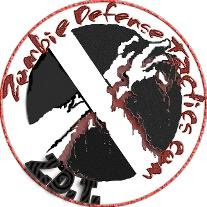 In case you want more, Bingham is offering an evening of ZDT.
Over on the right, welcome to our newest link: Vampiress.ca
I learned about this great video of Dart Vader dubbed over with classic James Earl Jones audio clips.  Makes the Evil One even more of a badass. 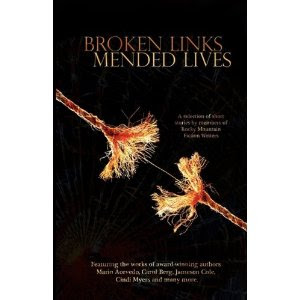 Their anthology Broken Links; Mended Lives, is a finalist for a Colorado Book Award.  Jeanne served as editor and I have a short story.
The introduction of the iPad has heated up an already boiling dialog about epublishing.  Most of the conversation is driven by owners of self-publishing companies.  Their argument can be rendered down to this: with epublishing, a writer doesn't need the permission of a publisher to get their book to the public.
Guess what?  You never did.
This article from the Wharton and Boston Consulting Group lets Steve Wilson of FastPencil pitch his vision of epublishing and I quote:
High-tech e-book gadgets are one thing that is revolutionizing publishing. If companies like Silicon Valley startup FastPencil get their way, new social-networking-based self-publishing services will be another. FastPencil is what CEO Steve Wilson calls a "next-gen" publisher, which uses social networking and an arsenal of widgets to take authors through their book projects from the drawing board to the bookshelf, potentially for as little as $10. The key, says Wilson, is that FastPencil gets involved with authors as they write their books -- not after, as traditional and other online publishers do.
A caveat that's buried in the interview is this:  In fact, a lot of our authors don't even care if their books are profitable.
If you're one of us working writers, yes we do!  I could pick this article apart because what FastPencil offers is nothing new, it's an updated pitch for a vanity press.  So they offer to leverage social networking to help sell books, big deal.  We writers have been doing that on our own for years.
¶ posted by Mario Acevedo @ 7:51 PM

Comments:
Got that right! I think there will always be a market for people who will pay to be published. But most readers can tell very quickly whether or not they like something, and the professional books will outsell the other stuff any day.

I heard about the zombie apocalypse fighting/defense class thing. I looked up their website and apparently they also do a workshop on jedi fighting techniques. Suddenly I wish I could have beamed myself over there for that.