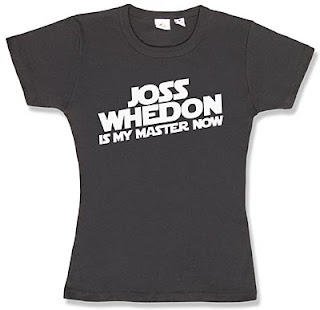 Some very exciting news from one of my favorite writer pals— 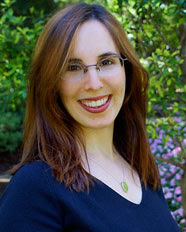 The February edition of "MySpace Dark Horse Presents” will introduce a new writer to the comic book field, dark fantasy/supernatural romance author Jackie Kessler, who will pen a short "Tales of the Vampires" episode of "Buffy the Vampire Slayer Season 8" titled "Carpe Noctem." Kessler, whose novels include "Hell's Bells,""Black and White," and several Young Adult titles under the name Jackie Morse Kessler, is joined on the comic by artist Paul Lee.

It will be free on line so I’ll post the link as soon as we get it!!!! Congratulations, Jackie!!!

Now for some not so exciting news:

The network has canceled Joss Whedon's cult fave, which in May beat the odds with a second-season pickup despite low ratings.

The sci-fi series, which is filming episode 11, will finish its 13-episode order.

DAMN and DOUBLE DAMN. Dollhouse was just starting to come into its own.

Gave you the LOGO news last week, here’s the rest of it: MTV will kick off their Buffy bonanza on Jan. 10 with an 8-hour marathon starting at 11 a.m. EST. Then beginning Jan. 11 it will air each morning at 11 a.m. On MTV it will be followed by reruns of Grounded for Life and Degrassi… 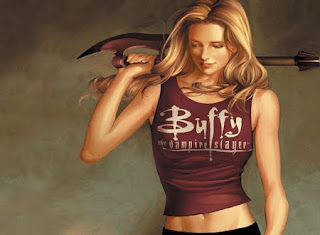 The news comes on the heels of more good news for Buffy fans. They are now casting for a series of motion-comic webisodes based on Joss Whedon’s highly successful “Season Eight” comics. No word on when production will start, but last month they were looking for voice actors to portray Faith, Kennedy and Principal Robin Wood, as well as a bunch of new characters (including someone who sounds like actor Daniel Craig to play a character based on the James Bond star).

And as most of you already know, the IFC Anita Blake TV show is not happening. Didn’t really follow this one, so I don’t have a clue why. Maybe you know.

* * * *
Curious about which city is America’s most literate? Well, for a moment, pretend you are.

We just squeaked in.

And I don’t have US figures like these, but here’s the UK’s top selling books for the last decade as reported by the Guardian:

In the last decade, Harry Potter's creator sold "more than double the number of books shifted by her closest rival." Roger Hargreaves finished "a surprising second, having sold a whopping 14 million volumes of his low-cost children's tales." According to Nielsen Bookscan, the top-selling authors in the U.K. during the "noughties" were:

The news of Kirkus’ demise might be slightly exaggerated:

Kirkus Reviews has come back from the dead.

Memos from Kirkus managing editor Eric Liebetrau (see DailyFinance ) indicated that the review publication has restarted because "there is a buyer in the works." Until the deal closes, in "probably 2-3 weeks," Kirkus will "resume business as usual under the Nielsen umbrella."

And from Shelf Awareness:

Perhaps the least surprising headline of the new year appeared on CNET News: "Kama Sutra most pirated e-book of 2009."

The manual "for so many things sexual managed to beat out another manual of fundamental interest to a pirate's survival on the tossing tempests of this world: Adobe Photoshop Secrets," CNET News added.


Then the next most pirated works are other sex manuals, the Twilight series, a couple of fix-it manuals and a guide to nude photography.

This might at first glance be funny if it wasn’t affecting every damned writer out there. I’ve found my books pirated on a dozen sites. Mario has, too. I don’t know how long it will be before publishers take a strong stand on this and get their legal departments to shut these sites down.

A bit of movie news:

Morel, who last directed the action hit "Taken," has signed a deal with the studio and will work to hone the script. Pic is one of the biggest priorities on the slate of Par Motion Picture Group prexy Adam Goodman.

Kevin Misher's Misher Films will produce with New Amsterdam's Richard Rubenstein, who produced the telepic "Dune" and the sequel "Children of Dune."

The film had been developed by Peter Berg, who exited when he committed to Universal's "Battleship" based on the Hasbro board game.

The novel remains a bestselling sci-fi classic, but the previous film version, directed by David Lynch and released in 1984, was neither a financial nor critical success. Any thoughts from you Dune fans, out there?

A last bit of holiday cheer. 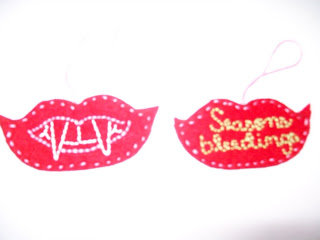 I showed you the two cute ducks that the Tot made for Mario and I—well, here from our own Lady K, I’m happy to present Xmas ornaments made just for us. I have a feeling, Lady K got some help from mom Vickie with these, although since she got her own work bench for Xmas, she may have made them herself. We have two very talented young friends out there. And, as Che sang to Evita, “get them when they’re young. “ I expect these two to keep in touch for a long time.

And I know what I want for Christmas next year: 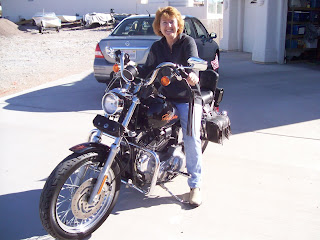 Sam, does this bike look familiar? All that's missing is a black duster a la Spike...

Comments:
Jeanne, you ROCK. I'd get you that bike if I could. But the duster would be mine. :)

I had no idea the Anita TV series was canceled.

Boy, are you quick!!! I am so excited about the project!

PS We might be able to both get dusters if we go to D*C this year!!

REALLY??? Because I'd love that duster... Man, do you think they have it for people like me who are 5' on a tall day?

This just makes me think of Mario eating it on his motorcycle. So I'm smiling...

Jackie-- we can always hope.

HNY - Hannah gets cuter every year.

Jeanne, will you hate me if I admit I haven't watched any of Dollhouse season 2? I haven't had time for TV.

buffy needs to come back and get rid of the twilight vampire!

Jeanne: You look pretty cool on that bike. Spike would look sweeeet on there with. Just sayin'. *grin*

And I wish I could take credit for the ornaments. http://www.etsy.com/view_transaction.php?transaction_id=23620361

I hope that link works. Blugirl Designs http://www.etsy.com/shop/bluegirldesigns created them. I saw them on one of many shopping trips through Etsy.com (I am there every day window shopping) and immediately thought of you and Mario. I am glad you like them.
********
booo hiss on Dollhouse being cancelled! Dagnabbit!

Hey Gina-- obviously you are not alone--hence the cancellation. But I can't blame you. The show started a little slowly and picked up when Joss took more of an active role. As I said in the blog, this season it really hit its stride. At least we will hopefully get a satisfactory wrap up.

And Vickie, I saw your email about the ornaments after I posted. Still, I'll bet you could have made them if you wanted!

Someone wore a shirt to an RWA meeting that said "And then Buffy staked Edward" I loved it.

Jeanne, I really hate editing--especially when i disagree with requested edits. I'm also so tired of this story I want the characters to die (ok, well maybe not reall,y, lol) Any tips for pushing through?

We took the tot to the snow for the very first time. I'm sending you pics. I'm sure people with real winters would have found all the children in heavy coats and snow pants hysterical, considering it was about 55 degrees that day. Now she wants to rent a cabin in the snow for next christmas. We'll see, lol.

Rats on Dollhouse. I think Anna needs to send Joss a letter about how her life would make a good TV series...

Hi Suzi-- i remember once when I was growing up we went to the "mountains" for the snow. It WAS hysterical. My folks, who were raised in the east, took along a sled. Of course we kids had never seen a sled let alone ridden on one so we spent most of our time face down in the snow!!

As for edits-- my suggestion is to just push on. I am up at Fairplay for a weekend writers retreat and that's just what I intend to do. Otherwise, you'll never finish!

BTW, who is requesting the edits? Maybe you don't have to deal with them at all. As for killing off all your characters--you may want to rethink that one! :-)

Hi Jeanne,
An agent is requesting the edits. This particular ms was one I submitted and submitted and couldn't sell because it was a Vampire/Werewolf story. I'd actully given up on it and moved on to another story. Out of the blue it placed second in a contest and the agent requested the full and said she loved the characters and the world but had a bunch of suggestions, including changing the creatures. I can take out the Weres and replace them with other creatures, but I just don't think I can take out those Vamps without completely rewriting the story. Sigh.

I can't actually kill off these characters, the girls in my dance class won't let me, lol. This is the ms I wrote for them, so if it has a shot, I want to take it.

Then I have all the edits from my critique partner and beta readers for the other ms, the one Harper Teen requested. These aren't difficult, I'm just tired of editing and want to write something new, lol.

Have fun at the retreat!!

I know I'm checking in late but I just wanted to say that I have the Joss Whedon is my Master Now shirt. It's fun because I get nods from other fans, and have gotten some of the most interesting comments from people who don't know who Whedon is. My favorite was from an older lady who volunteers at the library's used book shop. She asked what it meant. When I explained, she laughed and said that she thought that I had just gotten married to a man names Joss Whedon and that my shirt was one of those sarcastic/joke shirts alluding to the fact.