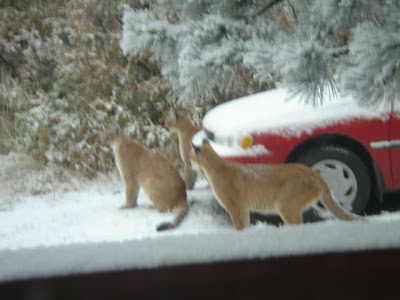 Colorado is famous for its cougars (i.e. mountain lions) though usually in Denver, cougars mean those women in Cherry Creek with big blond hair and big, fake...you know.   Here are the more well known cougars, cruising for brunch in nearby Conifer.  Yikes!
The Bookfair at the Barnes & Noble Pavillions was a nice way to spend Friday night in the city.  Jeanne and I bookend Jen Long, from Colorado Humanities & The Center for the Book. 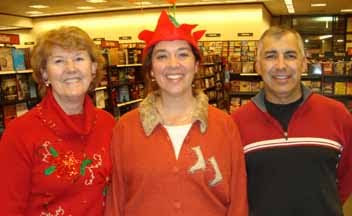 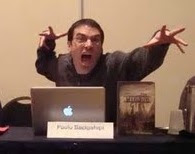 One of the bennies in being a writer is that you rub shoulders with a whole bunch of  interesting people.  Years ago I had the pleasure of meeting Paolo Bacigalupi, seen showing his good side at the last MileHiCon.  Even sober, Bacigalupi is an intense guy.
No surprise that his debut novel The Windup Girl was listed by Time magazine as one of the ten best novels of 2009.  Most awesome. 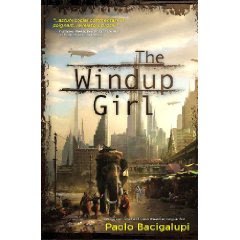 Win stuff!  Mystery pals Colleen Collins and Shaun Kaufman are real-life PIs.  They're running a contest over at Guns, Gams, and Gumshoes where you can also learn cool stuff like how to tell if people are lying.
Catch my interview with Christine Morehouse at Over The Edge Book Reviews.

If you're wondering about novelizations of movies or TV programs, (who are those writers?) check out this industry blog of The International Association of Media Tie-In Writers.  Dig their defiant proletarian logo.
Another bout of shrinkage in the publishing world.  Kirkus Reviews is getting the ax. 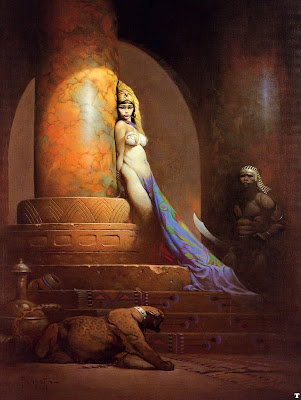 More sad news in a different venue.  The great Frank Frazetta is one of my favorite artists and I've tracked his career since the early 70s.  Now come to learn that his son, Frank Jr, was arrested for allegedly trying to steal $20 million worth of his father's work--using a backhoe to break into the family museum.  Junior's story is that he was going to take the paintings to a more secure location.
(<-Egyptian Queen by Frank Frazetta)
And lastly: 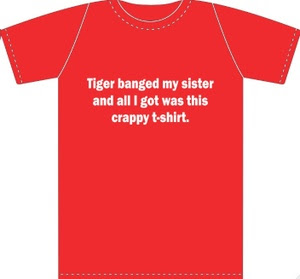 Comments:
Well, you did it again-- two stories I planned to run on Thursday== Kirkus getting axed and Frazetta's son attempting to rob his father's museum. Mike Mignola, creator of Hellboy, alerted me to the story. Frazetta Sr. is renowned for his work on Conan, Tarzan and Vampirella, among others. Sad state of affairs.

Even sadder that you try to steal my stories.

Love the cougars Mario!!! They are beautiful creatures, and you don't normally see them in the snow. Thanks for sharing the shot.

That comment deleted was by me-- won't tell you why... anyway, Mario, care to share HOW you got that cougar shot???

I get amused reading these posts and guessing which one of you wrote it. Sometimes I'm wrong. But not this one, Mario! The Tshirt clinched it.

Thank god you figured it out. sexy...I don't want to be confused with Mario in ANY way..