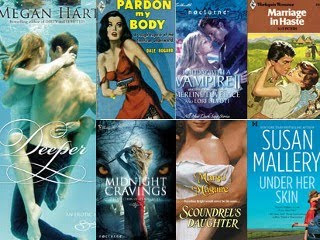 Mario here:
Harlequin has long been known for their steamy covers but now they're getting heat they'd rather not have.  In case you haven't heard, the big news in the publishing world is that Harlequin is getting roasted over its decision to start a vanity press.  In fact, both RWA and SFWA have delisted Harlequin as an approved publisher and MWA has issued a statement expressing regrets with possible delisting in the future.  For an excellent analysis about why Harlequin's move is such a bad idea, visit fellow fantasy author Jackie Kessler's blog.
It's a shame, because I know several wonderful authors who make their living writing for Harlequin.  Weigh in with your opinions. 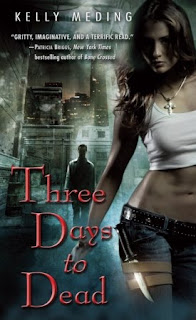 As an appetizer for her forthcoming release to be released this Tuesday! Kelly Meding gives us a taste of her wit and imagination with her story The Hoarder, now available for free at SUVUDU.
We here at Biting-Edge global headquarters earn our street cred by inventing tales of the fantastic.  So when people tell us they pay their bills chasing ghosts and talking with the dead, we're all over that news.  So float on over to 3042 Mountain Sky.

The Literary Review posted its Bad Sex in Fiction Awards.  Check out this passage from from Black Swan Green by David Mitchell.
"Tom Yew got on her and sort of jiggled there and she gasped like he was giving her a Chinese burn and wrapped her legs round him, froggily. Now he moved up and down, Man-from-Atlantisly. His silver chain jiggled on his neck.
Now her grubby soles met like they were praying.
Now his skin was glazed in roast pork sweat.
Now she made a noise like a tortured Moomintroll.
Now Tom Yew's body jerkjerked judderily jackknifed and a noise like a ripping cable tore out of him. "
jerkjerked judderily jackknifed?  Okay, maybe this passage does something for you.  Jeanne?  Don't let me judge. 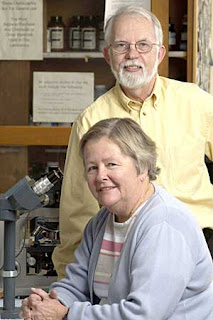 The Plants Told Us You're Guilty.  Fellow mystery writer Beth Groundwater gives a good recap of the presentation at November's meeting of the Rocky Mountain Chapter of the Mystery Writers of America by Jane Bock, Professor Emerita, about the use of botany in homicide forensics.  Here is Bock (seated) with Dr. D. O. Norris. 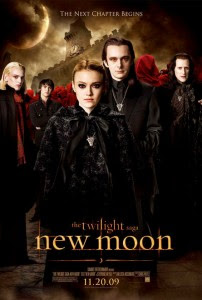 Since Biting-Edge is about vampires and though Stephenie Meyer doesn't need a boost from us, we have to report that New Moon set box office records this weekend, knocking Batman off his The Dark Knight bat-perch in opening day receipts.  Anyone see New Moon?  Fangs up?  Down?
¶ posted by Mario Acevedo @ 4:32 PM

Comments:
This comment has been removed by the author.

Mario ... please tell me I did not just read what I read. You completely just made the excerpt up. yes? no? dang it.
_________________________
New Moon - ok folks, I went to see it Saturday and it was ... ok. Compared to the first movie it was WORLDS better, but let's face it. It would be pretty hard to go lower than the first one. Of course as I say this I suddenly remember all the B movies I've seen in my life and should probably amend that statement. Anyways, here is how I think it plays out. I'm not really including anything spoilerish since if you've watched the previews you know what I'm talking about.

Pros:
- the Director has a sense of humor about it all. A couple of the scenes reflect the fun/absurd idea of old world/ancient vampires in a modern world. The opera music in the elevator was fantastic.
- ALICE. I say a lot of negative stuff about the Twilight "saga" but I'm completely in love with Alice. She is a lovely character and New Moon reflected this well.
- The fight scene. It won't win any awards, but I like the way it was done. Enough violence to make you cringe in your seat when vamps landed a light speed on the marble steps, but not enough to take it out of kid territory. The sound and post production guys get kudos from me for this scene.

Cons:
- The Bella/Edward scenes were still snooze worthy. I won't say the two actors are bad at what they do, I just think that they are trying so hard to do the tension filled, tragic tinged, you-are-my-soul-mate romance that they have done the opposite of going overboard and have simply underplayed it too much.
- The shirtless werewolves. This made me laugh very hard in the theater and earned me a number of ugly looks from avid fans. The werewolves are ripped, and they take every chance to show this. The film doesn't even wait for Jacob to shift before he starts bearing his pecs. "What's that you say Bella? You're hurt? Excuse me while I slowly take off my shirt and flaunt my six-pack for the camera so I can dab your would with it."
- This isn't the movie's fault (and to the actors' credit they did their best to make it not-creepy) but the dialog! So much worse than the stalkerish tenancies of Edward in movie 1. Some of the dialogue (you know it when you hear it) boarded so close to "I'm sorry I hit you Baby, I'll never do it again I swear" that I could barely stomach it.

Overall: It was an OK movie. I wouldn't buy it and I wouldn't go see it again at the theater, but it was decent mindless entertainment which was just what I needed that afternoon. Plus, the set and costume designers should be commended. The sets and clothing were well styled, the color palate was very well thought out, the minor details in the sets were fun, and I enjoyed the Volturi costumes quite a bit.

As for knocking Dark Knight off its pedestal? I'm not surprised but it makes me sad.

And Mario-- you scooped me...TWICE

I was going to run the Harlequin story and Bad Sex Awards...

One ha for every scoop.

Jeanne I won't say *don't* go watch it. I would just suggest you don't go see it with expectations of it being more than it is. As far as mindless entertainment went it certainly fit the bill, but it left me a bit flat like romcoms do. I didn't walk out feeling like my time was completely wasted, but I woudl have felt jipped if I'd paid more than the $5 I did for a movie ticket.

Such a nice post, it is really interesting, want to admire you, you are really a hard worker guy, Thanks.

This is such a great news, it really like this, Your blog is nice and informative. Thanks for the article.