Wednesday, September 02, 2009
Back to normal? After a week of signings and travel, I’m home for about a minute. Tomorrow it’s off to Dragon*Con after the Writer of the Year panel at TC LoDo. On a red eye, no less. But there was no way I would miss the chance to crown Mario for real…

Last week I signed at three great bookstores. The first was Tattered Cover in Highland’s Ranch. Great crowd—this store feels like home to me and the crowd was filled with familiar faces. I hope to sort through those pictures and put them up on my website soon. 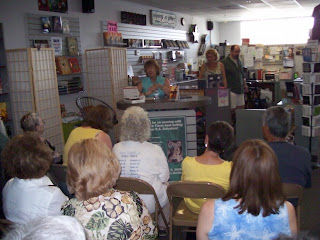 The second was Mysterious Galaxy in San Diego. 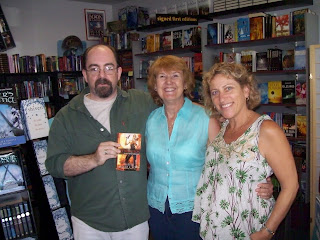 Once again, Patrick, Terry and Ben (who shied away from having his pic taken) were wonderful hosts to a most enthusiastic crowd. 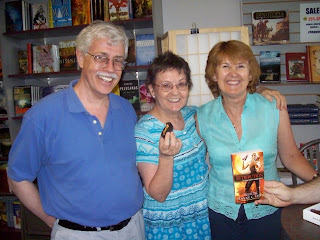 Of course my sis and cousin were in attendance. Along with lots of friends from San Diego Sisters in Crime and former work mates and class mates and neighbors. I'll get those pics on the website, too.

Sunday it was onto Glendale and Mystery & Imagination. 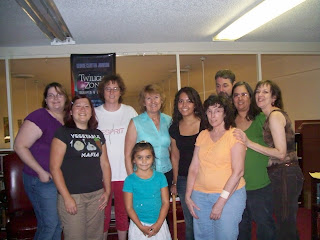 Here is the crowd responsible for my finally getting on Facebook!! I don’t know how Facebook works exactly but I’m learning. (If you want to add me, you probably know how.) 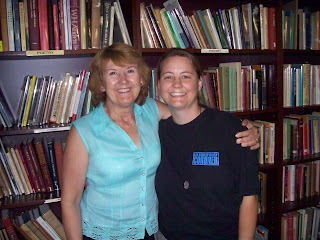 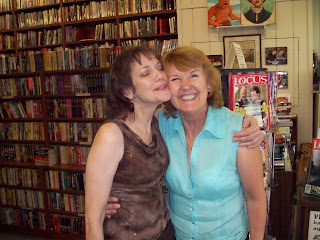 Mugging it with store owner Chistine Bell. She always hosts a big birthday party for Ray Bradbury each year and here’s a pic from the last one. 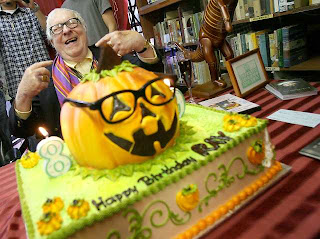 BIG fires going on—we’re seeing the results here in Denver. This photo was taken by Kris’s mom. It was scary to see those bloody sunsets and know what’s causing it. 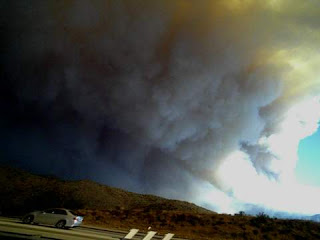 Luckily, her family is safe.

From the New York Times : Reader's Digest Association, the 87-year old magazine publishing company, plans to file for Chapter 11 bankruptcy protection "to carry out a restructuring that would give lenders control of the company," the New York Times reported. The company "is seeking to reduce its debt load, which swelled after it was taken private in 2007 by an investor group led by Ripplewood Holdings." The Times noted that Reader's Digest has now "reached an agreement in principle with the majority of its senior lenders to convert a 'substantial portion' of its $1.6 billion in senior secured debt into equity."

Haven’t read the magazine in years, but it’s still a staple in most medical offices.

From the Ausiello files: Artwork for Dollhouse, Season 2. Love the tagline. 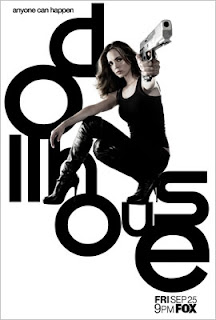 Disney Buys Marvel
The Walt Disney Company is acquiring Marvel Entertainment in a stock and cash transaction for approximately $4 billion. Bloomberg News reported that the purchase "gives Disney, the world's largest media company, more than 5,000 Marvel characters to market in movies, theme parks, stores and on television. Spider-Man, Iron Man and Wolverine films have pulled in billions of dollars at the box office and offer Disney an opportunity to shore up profits at its four main businesses."

The New York Times observed that Marvel’s publishing business is strong: "The company was the top comics publisher in 2008, edging out its closest rival, DC Comics, in both unit market share (46% to 32%) and retail dollar share (41% to 30%). The comic book industry had about $715 million in sales last year, according to Milton Griepp, the publisher and founder of ICv2, an online trade publication that covers pop culture for retailers."

Can you imagine Snow White strolling through Disneyland with Big Bertha, Nightmare or Black Widow?

Here's my schedule for Dragon*Con. Come by and say hello.

ANY BURNING QUESTIONS YOU'D LIKE ME TO ASK THE WONDERFUL MS. HARRIS? HERE'S YOUR CHANCE. SUBMIT THEM IN THE COMMENTS...

Title: The Future of Urban Fantasy
Time: Mon 11:30 am Location: Montreal / Vancouver - Hyatt (Length: 1)
Description: Where does the genre go from here?

For those of you who may be interested, here are links to order Retribution. I promise not to post again, but I have been asked.

Thanks to all who have ordered Retribution. I hope you like it.

For the six people in the universe who have NOT seen this MJ video--including me until yesterday-- here it is.

Comments:
Jeanne, I had not seen it, either. Very strange...

Yes it is strange. I guess some company in Europe posted it as a hoax...why? Who knows?

Have fun at Dragon Con! I'm jealous. The "grave yard shift" workshop sounds fab. I'd love to know what jobs they list.

Glad to hear the signings went well. We're sorry we missed it (but Hawaii was fun).

The tot started kindergarten yesterday. She's not sure she likes school. Sleeping in and watching cartoons in her PJs seems much more fun.

Have a safe trip.

Will you ever come to Chicago????

Hi :)
Thank you for sharing the pictures, they are great. It looks like a great time was had by all.
You are in a whirlwind of activity!
Congratulations on the DragonCon panels/events.
I know you will have a terrific time.
I posted my Charlaine question on your other site.
Love and best wishes Jeanne,
@RKCharron
xoxo

Suzanne said: The tot started kindergarten yesterday. She's not sure she likes school. Sleeping in and watching cartoons in her PJs seems much more fun.

I'm with the tot-- sleeping in and watching cartoons is WAY more fun.

Hi CLJ-- will I ever come to Chicago? I hope so. I like that town!

Just come before April, that's when I'm getting married, after that, I'll be living in Canada! :0)

well, congratulations on the nuptials. What will you be doing in Canada?