Thursday, August 06, 2009
More Post Cards So it’s 3:30 in the morning and I can’t sleep. Brain is firing on all cylinders so it makes sense to get up and get to it. At least I can get started on this week’s blog.

Mario reminded me that Bitten by Books is conducting a poll to determine the funniest UF author. Of course, he's a candidate so go here and vote.

Speaking of Mario— He’s working on a proposal for a new series that’s the best thing he’s done yet. And I don’t throw that kind of hyperbole out lightly. I hope it sells because it’s a great story. When he’s ready to share, I’m sure he will but I wanted to be the first to mention it: Blood Silence. You heard it here first.

Comic Con—Here are a few pics. It’s funny. You take a million pictures at this thing and when you go through them, you think, what am I going to do with all this? I chose the steam punk ones for today mainly because besides terrific and familiar superhero costumes, these are the most detailed and original. Front and back as you’ll see. 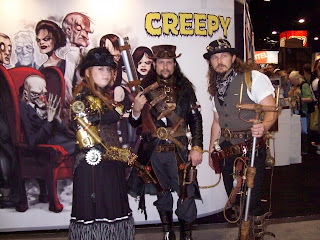 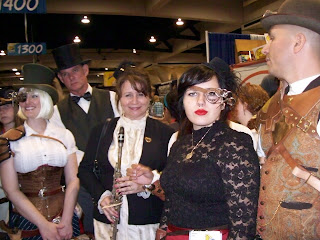 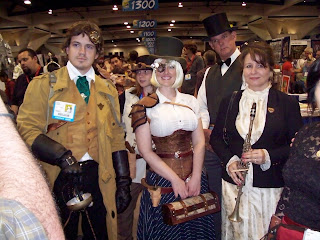 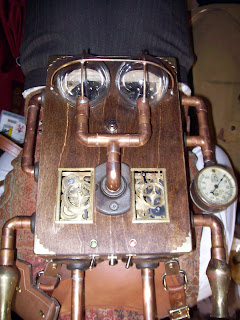 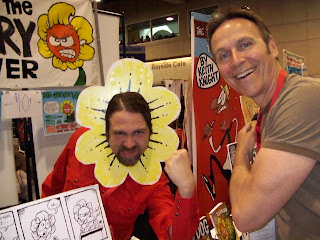 Something just for Mario: 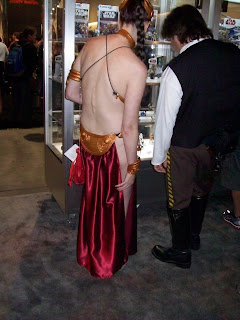 And the kind of photo that makes dealing with the madness worth it: 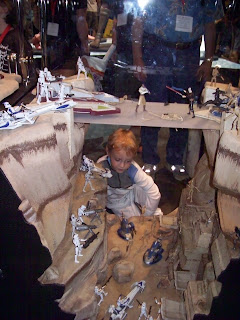 Also, here are a few more road trip pictures. We often ooh and awe over the beauty of another country’s landscape, but we have some awesome scenery of our own. I told you about Sedona. One of our other nostalgic stops was Jerome, AZ. Have you ever been there? It’s a former mining town that hangs (literally) from the side of a mountain. Now it’s more or less an artists colony, biker hang-out and tourist trap. But on the nostalgia meter, it ranks high for me. Ron and I roamed the streets and reminisced about days gone by. 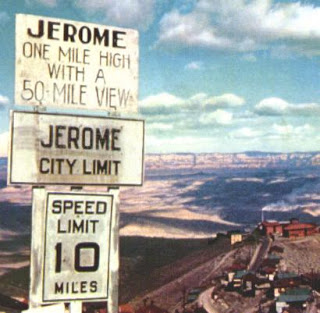 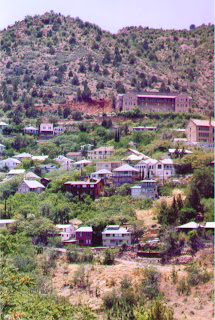 And I picked up a little souvenir for Mario. 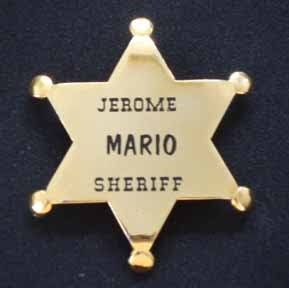 We ended up in Moab after experiencing a dust storm in Monument Valley that left us breathless. 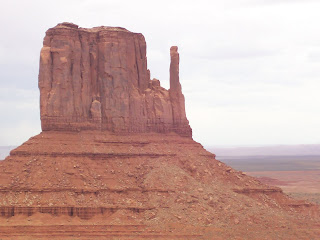 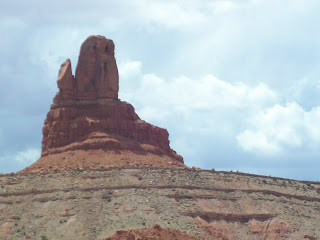 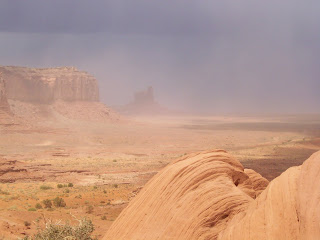 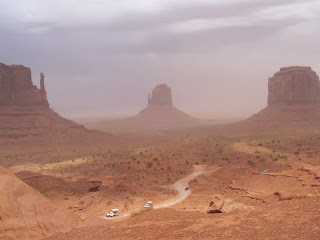 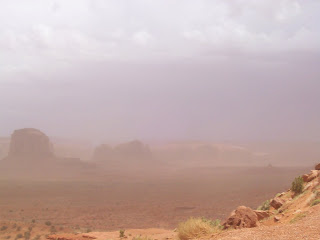 Okay-- that's enough for today. Only thing more boring than seeing vacation photos is listening to someone tell you about a movie they saw. It's not the same as being there. I'll pick up the trip in Moab next time if you're interested.


Now for some things going on in the publishing world.

For you writers: I think I got this from Shelf Awareness.

*Leisure Books Calls for “Fresh Blood”
Leisure Books, the company “leading the way in publishing paperback horror,”* is partnering with Rue Morgue magazine in association with horror fiction web site ChiZine, to present “Fresh Blood,” a new writing contest specifically for unpublished horror authors. The winner will receive a contract for publication in Leisure’s 2011 lineup, as well as a contract from ChiZine Publications for a limited-edition hardcover release, also in 2011. Leisure is looking for finished horror novel manuscripts, either supernatural or non-supernatural, of 80,000 – 90,000 words. A panel of experts, including Leisure Executive Editor Don D’Auria and editors at ChiZine, will judge entries. The finalists will be announced in November 2009. From December through July 2010, monthly competitions in categories such as “Best Summary,” “Best First Line,” “Best Title,” and “Most Frightening Scene” will run on the ChiZine.com. Readers will have the opportunity to vote for their favorites, and after each deadline, entries with the fewest votes will be eliminated. The winner will be announced in August 2010 at Rue Morgue’s Festival of Fear in Toronto, Canada, as well as on the Leisure Books and ChiZine web sites. Entries should be sent to Submissions@dorchesterpub.com by September 30, 2009. “Fresh Blood” must appear in the subject line of the email. For full entry details, click here.

For those of you who can’t get enough Edward and Bella, EW can announce — exclusively — that Yen Press will be publishing Twilight in graphic-novel form, publication date still to be determined. Though Korean artist Young Kim is creating the art, Meyer herself is deeply immersed in the project, reviewing every panel.

And a sad note from my home town: 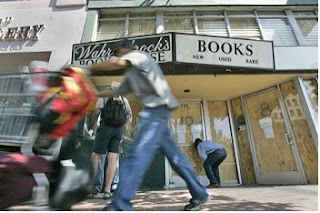 From the San Diego Union:

Final chapter for a local treasure

After the final customers left San Diego's oldest and largest bookstore Thursday, co-owner Charles Valverde Jr. laid off his last two employees, locked the doors to the 74-year-old downtown landmark and boarded up its windows.

Jeff Shelby, did you see this?


I think that’s it for now. Mario and I are on the road next Thursday. We travel to Austin for ArmadilloCon. But even more importantly, I get to meet his sister. I hope she tells me lots of good things about Mario. Things sufficiently humiliating as only a sister can! I promise to share!

One last thing-- some eye candy for my Buffybuds:

I'll come back and read and comment when I have more time. I wanted to say thanks for the steampunk pictures though :)

Bob the Angry Flower was angry--we just couldn't figure out why...

Love the steampunk costumes. Me and the steampunk_love gals want to do a steampunk pannel at RWA natioals next year (in costume, lol). (Oh, the firefly workshop at RWA nationals this year was *amazing* I need to get you the linky to the "I need a hero" vid she showed at the beginning of the workshop...OMG.)

Your pictures are making me homesick. I grew up in Tempe and we took countless family vacations and school trips to both Sedona and Jerome (usualy with a stop at slide rock!)

the tot is waving.

Bob the Angry Flower was angry--we just couldn't figure out why...

If Bob the Angry Flower was a happy flower, it would be confusing. And if he changed his name to something like Bob the Happy Flower, it would just make him sound like a pansy... ;)

On this note -- I was reading something recently and got hit in the face with an idea that has since blossomed in my over-active mind.

The simple statement was that flowers are the reproductive organs of plants. (Technically, it's true. There's the part that pollinates and needs to be pollinated, and the fancy part is a landing pad for bees.)

We're all perverts and we didn't even know it. Gives new meaning to seeing some blue-haired old lady with big silk cabbage roses on her hat.

OK, I'm ashamed to be associated with my brain now.

Oh Pissenlit and Gina-- You are the reasons Mario and I do this blog...a couple of characters more perverted than we are. I love it.

Suzanne--you sound nostalgic for AZ the way I am for San Diego. And I just got back.

LMAO @Gina
Oh gosh, that got me thinking, what with it being wedding season, of the part of the wedding reception where they force all us single gals out on the floor for the bouquet toss. Heads up! Airborne bundle of naughty bits comin' atcha! Oh boy, I've still got at least 2 more weddings this summer...

I'm perverted and proud of it.

As well you should be!!

The tot got her postcard announcing the signing. (You need more excuses to go to SD, don't you, lol). She was very excited to get mail and it's on the fridge next to her maganets. If we're back from vacation then (if we even go, lol) we should be there. :)
~Suzi and the tot

I had not seen that and that just...sucks.:(

I was playing games online however for reading this post more interesting thanks for the share please do keep it going great job....Loveing this.

Welcome, Vince, and come on back!

Ok I'm really late on this one, but I just wanted to say "thank you" to gina for changing my entier view of how I see flowers now. lol Actually your comment made me laugh very loud ... and then I felt slightly ashamed.