Saturday, August 22, 2009
Coming to a book store near you.... Cross posted from The League of Reluctant Adults--

August 25th is a banner day for Leaguers' with new books. Here's a sample. All are terrific books by authors worthy of your time. Check them out.

Also, Over at Fantasy Dreamer’s Ramblings, Donna is offering four chances to win copies of Retribution OR the Anna Strong series book of your choice. Hop on over and enter. Contest ends August 25th at 10PM CST.

Get your Pre-Order On!

On Tuesday, August 25th, the League takes over the world! With books! And you can order 'em RIGHT NOW to ensure our global domination... 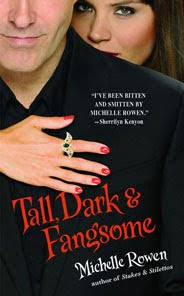 Sarah Dearly's vampire life is not all B-positive cocktails. A curse made her a nightwalker, the most vicious vamp there is; the charm she wears to curb her deadly tendencies is losing its juice; and a hunter from hell is turning up the heat. Gideon Chase will kill the ones she loves most if she doesn't obey his orders – that includes breaking up with master vampire Thierry and turning Gideon into an immortal vamp via her bite so he can escape a doom of eternal hellfire.  Making things worse are Sarah's growing feelings for Gideon, a bad boy who keeps showing a vulnerable side…but is it for real? Will Sarah's dark side take over? Or can she cure herself of the nightwalker curse in time to stop Gideon and finally get the chance to live happily ever after with Thierry…forever?  Why should people read it? It's the fifth and final book in my Immortality Bites series. Don't you want to see if I'm going to kill everybody off?

With her partner out of town, her family abroad, and her mentor estranged, newly-turned vampire Anna Strong is keeping a low profile. But now young vampires are turning up dead, completely drained of their life force. And though Anna wants to say no when Williams, her former teacher and now leader of a supernatural enforcement squad, asks for her help, she can’t. But soon, she’ll wish she had.

How far will Rose go to keep her promise?

The recent Strigoi attack at St. Vladimir’s Academy was the deadliest ever in the school’s history, claiming the lives of Moroi students, teachers, and guardians alike. Even worse, the Strigoi took some of their victims with them … including Dimitri.

He’d rather die than be one of them, and now Rose must abandon her best friend, Lissa—the one she has sworn to protect no matter what—and keep the promise Dimitri begged her to make long ago. But with everything at stake, how can she possibly destroy the person she loves most?

This is a mission unlike anything my vampire boss, Vayl, and I have ever been on. It's not our usual take-them-out-and-run; it's an undercover mission that needs the whole gang: a psychic, an interpreter, and a weapons specialist.

We've never gone in which such heavy artillery before, but the more the merrier, right? Um...nope. At least not since Vayl and I learned part of our job is to ferret out a mole concealed in our unit.

To add to our problems, we're being harried by a pack of reavers bent on revenge, and targeted by a Seer who wants to share Vayl's power - at any cost. This is going to be a blast.

Once a devoted children's librarian, Jane Jameson now works at a rundown occult bookstore. Once a regular gal, she's now a vampire. And instead of a bride, she's an eternal bridesmaid -- which leads her to question where exactly her relationship with her irresistibly sexy sire, Gabriel, is headed. Mercurial, enigmatic, apparently commitment-phobic vampires are nothing if not hard to read. While Jane is trying to master undead dating, she is also donning the ugliest bridesmaid's dress in history at her best friend Zeb's Titanic-themed wedding. Between a freaked-out groom-to-be, his hostile werewolf in-laws, and Zeb's mother, hell-bent on seeing Jane walk the aisle with Zeb, Jane's got the feeling she's just rearranging the proverbial deck chairs.

Meanwhile, Half Moon Hollow's own Black Widow, Jane's Grandma Ruthie, has met her match in her latest fiancé. He smells like bad cheese and has a suspicious history of dead spouses. But Jane's biting her tongue. After all, would a nice girl really think she has a future with a vampire?

Comments:
It came in earlier this week and I missed the call because I was gone. I'm picking up Retribution today at the bookstore where they are holding it for me. :)

You will actually be seeing the book before I do--I haven't gotten my copies yet!!! Maybe I'd better head for the book store!

Well I've picked it up, but haven't read it yet (tomorrow I'll read it all). The cover looks amazing though. Incredible color saturation and very dramatic.