Thursday, July 02, 2009
Some weeks are like that... Ever had a week when although nothing really bad is happening, you have the creepy sensation that it might? Premonition? Presentiment? Foreboding?

I’ve finished Chosen, got two pretty good ideas for the anthology stories due in August, am making plans for Comic Con and Dragon*Con and have signed contracts for the German and Norwegian editions of the Chronicles. So why do I feel depressed?

Summer doldrums? Or postpartum depression because I’ve finished another book? Nothing good on TV (except Merlin, that’s pretty good. Here's a link furnished by Gina to catch up if you'd like. And Leverage starts again soon)? What the hell is it?

Anyway, besides Farrah’s funeral and Michael Jackson’s family squabbling over who gets his kids (and their trust funds), there were a couple of other newsworthy tidbits this week. 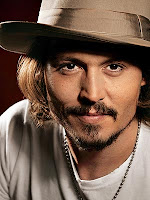 Johnny Depp has told Collider.com that work on Tim Burton's big screen remake of legendary US supernatural soap will commence next year, and that he'll be fitted for the fangs for the role of vampire Barnabas Collin.

“Dark Shadows is happening,” says Depp. "Tim is working on Alice in Wonderland which is obviously quite a large piece of work there. So when Tim is done with Alice and we get the script, which is very, very close, in order we’ll probably attack it next year. It’s exciting, very exciting. It’s like a lifelong dream for me. I loved the show when I was a kid. I was obsessed with Barnabas Collins. I have photographs of me holding Barnabas Collins posters when I was five or six. I’m very excited to do it.”

BTW, this great pic of Depp was one included in People Magazines 16 Sexiest Men—Some interesting choices. Check it out.

Something else to check out: Derek Tatum’s new/revised blog Mondo Vampire wherein he’ll …grab and discuss five random things that I like about vampires. Books, movies, art, odd facts, music, thematic elements...if it is vampire-related and I enjoy it, it's fair game. Now don't mistake this feature as a "best of," or even a comprehensive "favorites," list; my goal here is to show the wide variety available in the world of vampire lore and entertainment.

Derek is one of the multi-talented programmers for Dragon*Con and knows more about vampire lore (and lure) than I ever will.

Since I now know how to do this, I found another great video to share. Edward Cullen meets Buffy Summers.

We know this is exactly how it would go down, too, don’t we?

Now this did make me laugh this week so all is not lost. One of the winning entries for the Bulwer-Lytton Fiction Contest:

Winner: Detective
She walked into my office on legs as long as one of those long-legged birds that you see in Florida - the pink ones, not the white ones - except that she was standing on both of them, not just one of them, like those birds, the pink ones, and she wasn't wearing pink, but I knew right away that she was trouble, which those birds usually aren't.

For the complete run down of winners, follow the link above.

Lest you forget what prompted the wretched writing competition, I give you:

"It was a dark and stormy night; the rain fell in torrents--except at occasional intervals, when it was checked by a violent gust of wind which swept up the streets (for it is in London that our scene lies), rattling along the housetops, and fiercely agitating the scanty flame of the lamps that struggled against the darkness."

When there’s an Associated Press bulletin saying that he has found his soul mate but he’s going to try to fall back in love with you, change the locks…

Okay, so there were three things. From the New York Observer:

A movie review for (wait for it…) Nazi zombies! From Rex Reed. 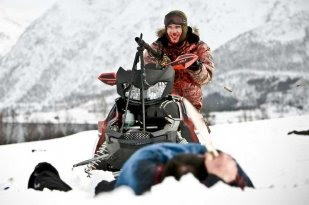 Dead Snow is a Norwegian horror film, if you can envision such a thing without developing a cataract, about a group of randy skiers in a mountain cabin without cell phone signals (or indoor plumbing) who are attacked by Nazi zombies. You can’t make up this stuff.

He ends with: The result piles on relentless thrills and unimaginable horrors, with a shock ending guaranteed to make you scream out loud. Director Tommy Wirkola mixes gore with humor (the Nazi zombies are pretty funny, like Peter Boyle in Young Frankenstein); the cadaverous makeup is outstanding; the actors do an admirable job portraying authentic-looking terror; and the fact that there is no conventional happy escape ending is refreshing. The director calls Dead Snow “Scandinavia’s first Nazi-zombie-horror-slasher-feel-good film.” I’m not sure about the feel-good part. The potential for tension and suspense is also diminished by screeching rock music that diametrically opposes the mood the film is trying to create. But as zombie movies go, it sure scared the hell out of me.

So, does that mean he liked it? With Rex Reed it’s sometimes hard to tell.

Don’t forget to come back on Saturday to check out the contest info. Frankly, I don’t have a clue why Mario wants to announce on Saturday, but who am I to argue? I’m sure he has his reasons. Just like he had his reasons for posting the pic of Emily with her pasties. Artistic something or other…

And just in case any of you out there are having the same kind of week I am, take consolation in this. 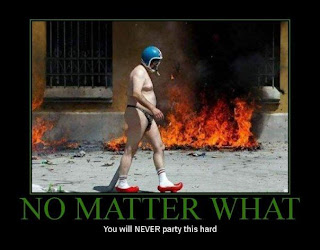 Comments:
{HUGS} on the rough week you are having.

YAY that Johnny Depp is going to be Barnabas Collins

@_@ on the weirdness that is Scandinavian horror

And that is the most I will ever be willing to see of Twilight movie and you know that's how Buffy would throw down.

Looking forward to seeing the contest of 4 July.
No plans other than putting some brick extensions to our driveway to make it a wee bit wider. Been invited to a parade up in Firestone.

Oh and BBCA has Being Human soon.....

i forgot about Eureka and Burn Notice-- I do love those shows, too.

I'll have to give warehouse 13 a try.

Alas, I'll have to wait for Being Human because our cabled oesn't carry BBC-- damn it!!

Can I just say....(and I'm sorry the guy died, really)...but it's been one of those weeks for me because I'm since of the non-stop Michael Jackson coverage.

So it's been one of those weeks. Nothing wrong, just blah.

In my case it hasn't helped because EVERY DAY I go to the gym, get on my hamster wheel and am trapped for 60 minutes with non-stop Michael Jackson coverage on their TV stations. I know more about Michael Jackson than I ever wanted to.

(Did you know he had a secret closet in in bedroom in Neverland? Deep in the bowels of his ginormous closet room, you could go through a secret door (if you had the password for the lock) and get to a smaller, enormous hidden closet. Maybe it was a hidey-hole for vampires named Bubba.

Gina said: So it's been one of those weeks. Nothing wrong, just blah.

So, you, too, huh? Must be the stars in misalignment or some planet in retrograde.

Hope this weekend is better for all of us.

Just for the record, tha tEdward meets Buffy clip simply made my day.