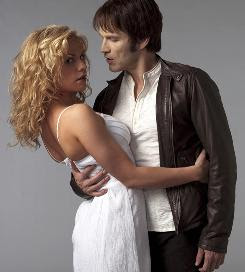 Forgot to mention something very important:

From USA TODAY: The 12-episode second season of HBO's True Blood, based on the series by Charlaine Harris "about vampires gingerly entering society after the discovery of synthetic blood eliminates the need--if not always the desire--to feed on humans," debuts this Sunday. According to USA Today, "Season 2 roughly follows Harris's second Sookie Stackhouse novel, Living Dead in Dallas."

Harris, who loved the first season, noted that her readers are quick to express their opinions: "A certain percentage believe the show is pornographic. A huger percentage love it and are very anxious for their favorite scenes from the books to be re-created in the show."

In tune with the "popcorn for smart people" label that creator once assigned the show, he promises a second season of "just more — sexier, hotter, funnier, scarier, more violent."

Comments:
I fall in teh category that feels it is pornographic. I also fall into the category that will hopefully push past that once a week in order to support a genre show. It kind of just comes with the territory of being ono HBO for better or for worse.

Well I watched the latest episode and I will say i was impressed. We will see what happens, but already this season appears to be ore "together" than last season. I felt last season floundered a good bit while it tried to find it's footing. At this moment I am looking forward to the next episode.

As a side note: Eric in foils and a barbershop cape getting his hair highlighted. That's all I'm going to say. Best. Moment. Ever.