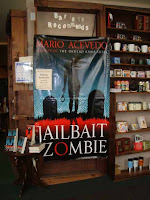 My publisher sent this ginormous banner. They made it for the New York Comic Con and then sent it to me. After my book tour, I can use the banner as a tent in case I ever get evicted.

In case you haven't seen my newest book trailer, here it is in all its awesome Lego stop-action glory (thanks to my son).

Write about sex, violence, and gore and my critique group crawls all over me. Then I get an email from a fan, Fahmi Imteaz, who wrote: your latest book, Jailbait Zombie could have been much better, but it was still great.
I was a little confused by her comment so I asked her to be specific.
Fahmi replied: I think the book could have been better if there was a bit more action, maybe a little more gun action. There was a lot more gun action in the other three books, and a lot more gore. There could also have been more sex parts like your first book. I also thought that you could have made the book much longer, I was upset when I finished the book.

The people have spoken. Okay, one people. More gore! More guns! Hoo-rah! But she also accused me of being too short and not supplying enough action. Where have I heard that before? But I digress.

On March 21, I'll be in Charlottesville for the Virginia Festival of the Book, speaking with Kim Harrison and Eric Nuzum. Eric who? He's a self-proclaimed lover, writer, and nonsense provocateur living in Washington, DC. Gotta the admire the guy. And he wrote a book The Dead Travel Fast about vampire lore from Nosferatu to Count Chocula.

Life is too short

Recently, I had the pleasure of knowing Barbara Parker, best-selling novelist, and an officer of the Mystery Writers of America. I met her during the national board meeting in NYC. That was only last January and she passed away this week from a prolonged illness. Barbara was a remarkable woman and each of us can only hope to be half as productive and inspirational as you can read HERE. 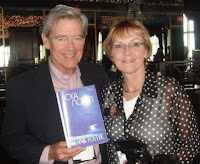 Comments:
Mario - the trailer was great. I love the bit with the safe. I honestly have never heard of anyone doing a book trailer before so that was interesting to say the least.

What? Barbara Parker passed away? I have never read any of her books, but I heard enough good about her, when I worked for the public library, to at least respect her as an author. We have lost too much writing talent in the past few months. My thoughts are with her family, her friends, and her legion of loyal readers.

I echo Leia's comments-- I am very sorry to hear of Barbara's passing.

Btw Mario that IS one massive banner. I pretty certain you could set up a whole camp of tents with it. That's really cool.

I had not heard about Barbara. Thanks for letting us know. I met her once at an ALA conference, and she was very gracious.

Your accent's fun - thank you for sharing it :-)