Mario is on the road. I’m posting his schedule again so you are forewarned.

But if you find yourself in any of these areas, after making sure your family is safe, you might want to stop in. Here’s your chance to see Mark Henry, Cherie Priest, Caitlin Kittredge and Mario all in one convenient location. That’s either very good news or very bad news. I hope the towns in question have prepared. Course Las Vegas is used to crazies so the people there hardly noticed, I’m sure. Mario is supposed to be sending pics so let’s hope he takes them before he starts drinking. Didn’t get any yesterday, though, so it’s not likely.

HOWEVER, I do have pictures from Mario’s signing at the Tattered Cover right before he hit the road. Sorry my camera technique isn’t the best. 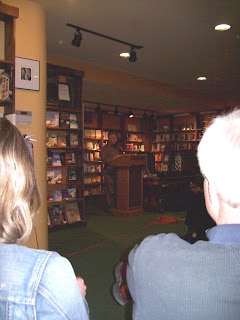 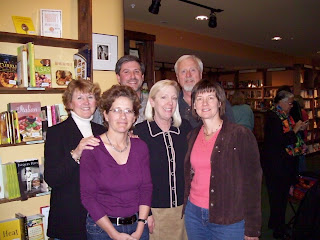 Friends of Mario (AKA FOM's) AKA His hard working critique group 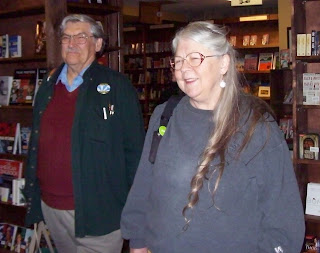 Ron & Nina Else of Who Else Books in Denver, another great Indie.

Now, let’s get to the important stuff— 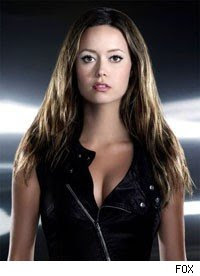 And from Variety (courtesy of my friend Carol Malcolm): (Joss) Whedon will be providing "a special musical performance" for an already-special episode of Ira Glass' This American Life on April 23rd. The episode - based around the theme of "Return to the Scene of the Crime" - will also feature contributions from TAL regulars Dan Savage, David Rakoff and Acme Novelty Library's Chris Ware, and be simultaneously broadcast to over 400 movie theaters and art centers around the US. No news, yet, as to exactly what Whedon's performance will entail, but we're hopeful for an appearance by Dr. Horrible co-writers Jed Whedon and Maurissa Tancharoen, we have to admit.

Unfortunately for me, This American Life is on Showtime, which I don’t get. If any of you catch it, let us know.

A couple of things from Shelf Awareness.

3/10/09 A paperback edition of Harry Potter and the Philosopher's Stone, which includes an illustrated card signed by J.K. Rowling, was sold for $19,120 by a Dallas auction house. The Associated Press (via USA Today) reported that the book was "one of only 200 copies from the first printing issued with illustrated wrappers by London publisher Bloomsbury." The winning bid came from a vintage comic book collector in Dubai.

3/11/09 Love the aroma of old books? New Yorker's Book Bench blog showcased CB I Hate Perfume in Brooklyn, N.Y., which sells In the Library, "a perfume inspired by the proprietor Christopher Brosius's love of books and his inability to pass a secondhand bookshop without stopping in."

According to the company, the perfume is "supposed to evoke a first-edition English novel via 'Russian and Moroccan leather bindings, worn cloth, and a hint of wood polish.' "

Not to mention “the faintest trace of Scotch.” I can think of a few writers who will be checking that one out for sure.

I know Mario mentioned this on Monday. Mystery writer Barbara Parker, 62, of Lauderdale-by-the-Sea, died Saturday morning surrounded by her family at the Hospice By The Sea in Boca Raton after a long illness. Here’s a nice obit done by the Sun Sentinel if you’re interested. 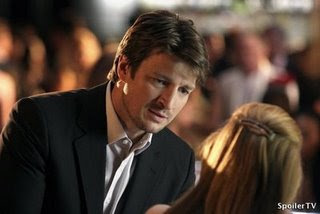 Who watched Castle this week? Here are my rough first impressions:

Negatives: Daughter smarter than both dad and grandma, and more mature than either. Old and timeworn. Beckett - the detective - handled evidence bare handed. Big clinker.

Postitives: Nathan, of course. Loved the little eyebrow action at the end… The poker game with Steve Cannell and Jim Patterson batting around “Castle’s” idea. Reminded me of the Tom Clancy line—the difference between reality and fiction is that fiction has to make sense…The detective. She wasn’t TOO glamorous…Overall, I liked it. I’ll watch again. How about you?

And don’t forget the contest! Here’s the deal: Answer this question in 250 words or less:

If you could spend one unbridled night with any fictional character in the world, who would it be? Why? What would you do? 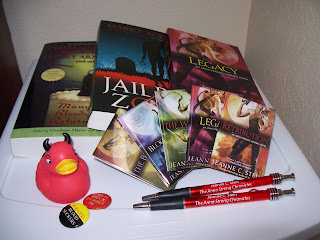 Prizes: Legacy, Many Bloody Returns, magnets and pens from me—Jailbait Zombie, buttons and a devil duck from Mario. Deadline: Midnight Sat. March 21—Mario and I constitute the panel of judges and our decision is final (that sounds SO official, doesn’t it?) The winner will be announced on the Biting Edge March 26—

Send your entries to: Jeanne@jeannestein.com
In the subject line, please put “contest”

Now, I’ve gotten a few entries with just names and addresses. I think what we have here is a lack of communication. For such a fabulous cache of prizes, you have to work.

One more thing: In today’s Denver Post there is an article about some guy from Canada who is having a camera concealed inside his prosthetic eye in order to “secretly record people for a project commenting on the global spread of surveillance cameras.” He uses phrases like people are “sleepwalking into an Orwellian society.” Anybody but me see the irony in what this guy is doing? Unfortunately, I couldn’t find the article on line but his name is Rob Spence if you want to conduct your own search.

See you back here next week or over at the League of Reluctant Adults on Saturday.  ¶ posted by Jeanne Stein @ 5:03 AM

Comments:
It is DEFINITELY past my bedtime. This became obvious when I misread a sentence as "Mario is on the roof", and got worried. Good thing I read some things twice ;-)

Also, Nina's hair is totally fabulous, and I am very jealous.

Thanks for sharing, and have a lovely day! :-)

Hi Tez-- Or good night, Tez-- but you are right. Nina's hair IS beautiful!

Jeanne: Okie doke, I just emailed my contest entry.
Unfortunately, Castle comes on after my bedtime. 8pm rolls around and I first have to prep Lady K with bath, then a little bit of Noggin, Cartoon Network or Boomerang television, then read a story or six...then bedtime by 9pm....so anything on at 8pm or later is phhhht until I go back to shift work.
I'd hoped that Castle would be on Hulu, but I haven't seen it on there yet.
It's almost Friday night!!!

Just read a blog that Castle's pilot will be aired again on Saturday night! I may have to stay up and watch it! In fact, I must, I must!

Vickie said:just read a blog that Castle's pilot will be aired again on Saturday night!

Excellent to know-- thanks for sharing!

How old is Lady K?

I'm curious, have you seen Blood Ties? It was a Lifetime series (22 episodes) that aired in 2006-2007. It's based on Tanya Huff's Vicky Nelson series (Toronto cop solves crimes with the aid of 450 y/o vampire who was the son of Henry VIII).

I just stumbled across the episodes on Hulu.com and watched the whole thing to the detriment of my personal and professional life. I really enjoyed it (except for the last few episodes). I've only read one of the Vickie Nelson books.

Overall I think I prefer it to True Blood. I identify more with Vickie Nelson, because she's sharp, a tough cookie, fierce (ok, I admit it, Sookie isn't somebody I'd be friends with.) And she strikes me as somebody similar to Anna.

Hi Jeanne!
The tot was so excited to get her bday surprise from her favortie vampire penpal. She says "thank you" (actually it sounds more like 'ank you, lol) and plans on wearing the necklace and ring to her party tomorrow. She drew you/Anna a thank you picture. I'll put it in the mail monday.

I didn't catch Dollhouse this week since yesterday was her bday and we took her to the long beach aquarium, out to dinner, and to see "witch mountain" (which was entertaining) but I'll catch in on hulu in the next few days, the previews lookd gooood.

Tell the tot Anna says You're welcome. Sounds like she had a perfect birthday with more to come today--she's a lucky little girl.

I only caught a few episodes, but now that I know it's on HULU, and with your recommendation, I may try to see more. I should pick up one of the books, too. Here goes another distraction!!

Always glad to provide more distractions! I hope you aren't like me -- when I'm watching something on dvd (or hulu.com, my new fav place) I can't help but watch 2-- no 3 -- no 4 -- no just one more episode all in on sitting.

Then the laundry is undone, dishes pile up, it's 3:30 AM and I have to be at the office by 7 (groggy and incoherent), and worst of all, no reading or writing has taken place. I'm worse with DVDs than with a book.

Jeanne: Lady K will be 6 years old on Thursday. She was born in the blizzard of 2003. It must have seemed fun for her to start the contractions a few days early with 4 or 5 feet of snow on the ground and emergency conditions on the roads. Wheeee!

Gina: I now have to look up Blood Ties on Hulu.com. I am like you, if I see something on there or watching some show on DVD, it's to the exclusion of all else. Thanks for the cramium's up.

Saw Castle last night! Stayed up past my bedtime and watched the very cool pilot! What great eyebrow action!

Gina said: I hope you aren't like me -- when I'm watching something on dvd (or hulu.com, my new fav place) I can't help but watch 2-- no 3 -- no 4 -- no just one more episode all in on sitting.
I am EXACTLY like you-- and so is my husband. We were huge Soprano's fans and when the series came out on video, we got the seasons just so we could see them again. So, we'd say-- one episode a night. Then we'd end up sitting through a whole season and saying-- how the hell did that happen?

Yeah, the eyebrow at the end go me, too. He is just TOO cute!!

Jeanne: I will tell her happy birthday from you. She is super excited as only one can get when one turns 6. Her beloved Grandpa Jack is coming out for a visit, Olive Garden for dinner that night, Cold Stone Ice Cream to get their cupcakes for her dessert, she's a happy camper. Roller skates and a pogo stick (both pink) for presents. And other goodies.....of course....

Lady K is a lucky girl!!

Well good. I know who to invite over whenever I want to share my DVD-athon.

I won't ask you two to huddle with me in uncomfortable chairs peering squinty-eyed at my laptop screen during a hulu-fest. Well I guess we could rotate the semi-confy office chair. But every 2 out of 3 sitting on one of my dining room chairs, nuuh.

Yes -- 9 whole eppys of Buffy on Sunday at my house. I need to lay off and do something productive.

Gina said: Yes -- 9 whole eppys of Buffy on Sunday at my house. I need to lay off and do something productive.

I know the feeling...

The gods bless the folks who invented Hulu.com and bless my DH who introduced it to me.