It’s good to be back in the normal routine, isn’t it? I’ve been working, working, working on revisions for book five—Retribution—and getting a start on book six—Chosen—so I’m especially glad to be done with the holiday disruption.

Saw my first movie of 2009 – Slum Dog Millionaire. Highly recommend it. The star, Dev Patel, is wonderful. The credits at the end make you want to stand up and dance. Great stuff.

Some articles about this and that:

Here’s one about TV and how it’s pushing the science boundaries. Dollhouse is noted.

And coming soon, Serenity in Blu-ray for all you techies.

Battlestar Galitica returns on Jan. 16. In the meantime, there’s a series of webisodes you can watch to fill the gap between parts one and two of the current season. Writer Jane Espenson says: The Webisodes, which will conclude on Jan. 12, just before the television series returns, are a self-contained murder mystery set aboard a small spacecraft that has been separated from the fleet. But they also expand on the “Galactica” mythology, through flashbacks, and flesh out major characters. Fans who had wondered whether Lieutenant Gaeta (Mr. Juliani) was gay found out in Episode 1 of “Enemy.” Or they thought they did, until his close encounter with a Cylon 8 (Ms. Park) a few episodes later clouded matters.

Something different—a music video brought to my attention by friend Derek. Kewl…

Amazon has added a new way of finding books to its site, which the company is calling Author Stores, single pages that feature all books from a particular author, plus, in many cases, an author photo and some related content, such as a biography, message board and streaming video.

Wonder when mid-list authors (like me) are going to get their own page? ☺

Sad Passing: Donald Westlake, award-winning mystery writer, died of a heart attack on New Year’s Eve. He was 75. More than 15 of his 100 books were made into movies. In addition, he wrote a number of screenplays, including “The Grifters,” which was nominated for an Academy Award in 1991. He wrote everyday on a manual typewriter. His next novel, “Get Real,” is scheduled for release in April.

The Damn—I missed it file: From the New York Times: Puttin’ Off the Ritz: The New Austerity in Publishing. Never did get wined and dined now I may never be! Frankly, though, I’m thankful to have a contract.

Can I say Ick???? If you’re eating, be warned, or there are children about, cover their eyes. Here’s the Polish cover for Many Bloody Returns. Yikes. 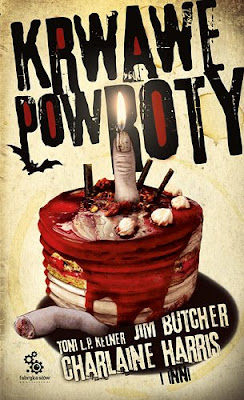 Better is the cover for the trade paper edition scheduled to be released next month—which is just like the hardcover…but softer and cheaper.

This weekend I’m off to Fairplay for a writer’s retreat. I've also been invited on Monday morning to speak to some students at the local high school. I'm looking forward to that. I plan to pick their brains, too. Find out just what they like in a book... Now, it’s the second time I’ve attended this retreat but the first time I’ve made the trip in winter. Wish me luck!!!

Okay, in the spirit of the season I’m finishing up with resolutions I DIDN’T make this year:

Lose ten pounds (Doesn’t EVERYBODY make this one?)

Watch less television (Then how can I know what new forensic wonders are out there? It’s research)

I’m sure there are others, there always are. Now it’s your turn—what resolutions did you NOT make this year?  ¶ posted by Jeanne Stein @ 5:50 AM

Comments:
I pretty much ditto your not-resolutions:
I did not make the resolution to lose weight. If I don't set myself up for the fall, then I will likely do better at it. That's my story and I am sticking to it. This way I can be pleasantly surprised....
(Chocolate is good for you!)
Watch less TV...I work on my laptop while I watch TV, I get to watch little of it as it is anyway. I am the one who puts Lady K to bath and bed each night, so TV stops for me at 8pm. Thank goodness for hulu.com! Or I'd never get to see Fringe.
I am not a big fan of nonfiction. I will read biographies of strong chicks like Madeleine Albright or Katherine Hepburn. Or my favorite Presidents, Harry S Truman and Theodore Roosevelt.

Have fun in Fairplay!

Thank you, Vickie-- glad I'm not the only one who is tired of making resolutions I don't keep. Besides, maybe this year, reverse psychology will be the ticket, huh?

While Jeanne is at the writer's retreat, we can say snarky things about her. Heh, heh, heh.

I've seen her plow through a whole bag of mini-Snickers and not share!

Wait just a minute there, cowboy-- I'm going to be in Fairplay, not on the moon. There's bound to be wifi somewhere. I'll be watching...

Have fun talking to the teens. From my experiance they will gladly tell you exaclty what they like and don't like. Prepared to be shocked and ehtertained (I was, they didn;t have books like then when i was a teen).

Happy New Year!
(inquiring tot's want to know if Anna has a list too)

Mario: You make not sharing mini-Snickers sound like a bad thing....

Jeanne: I can only that reverse puh-sychology works for me at some point....

New Years Resolutions? I stopped making them ages ago b/c I never keep them. Heck, I can barely keep "resolutions" that I make that span a couple of months - much less a year.

I'll get back to you about the "Homework" as soon as I'm no longer at work anymore. I love slow days :)

On second thought I suppose there are a couple of "resolutions" that I subconciously didn't make.

- Stop mourning over all the things I'm not talented enough to do and work on improving in the areas where I do have talent ... marginal as it may be.

- Open an Etsy shop for calligraphy stuff and see if anything happens (an extension of "resoultion" number one).

- Learn to have confidence in who I am as a person and stop worrying about people who want me to be something that I'm not.

A bit mushy I suppose, but that's what I've got. I figure with finally starting graduate work I'm getting yet another "new beginning" where my life will get re-arranged once more. Times like that are always good times to make resolutions b/c it's like starting from scratch again and I think you have a better chance of success when you start back at square one and re-evaluate what in life is really important, and what you just can't bother yourself over anymore.

My new year's non-resolution was to never get the stomach flu ever again.

Dagnabbit -- I already broke it. Now I need therapy to get over being a failure at breaking vows I promised not to keep.

On the other hand Jeanne's mini-snickers are safe from me for a while.

Hey Suzanne-- tell the tot that Anna doesn't have a list. I guess when you're a vampire you can pretty much do anything you want anytime you want. And her constitution means she never has to diet or exercise.

Leia said: Times like that are always good times to make resolutions b/c it's like starting from scratch again and I think you have a better chance of success when you start back at square one and re-evaluate what in life is really important, and what you just can't bother yourself over anymore.

I'm at Fairplay already but if I was at home, I'd share with you one of my favorite inspirational sayings. It ends with something like: there comes a time when you realize it's never too late to change a life and never too late to have one. I'm not quoting it exactly but it echos what you wrote.

gina said: Dagnabbit -- I already broke it. Now I need therapy to get over being a failure at breaking vows I promised not to keep.

At least you got your flu over with early in the year--now no more illness!!!

this is one vow you don't need to go into therapy for breaking. Entirely out of your hands--unlike the Snickers bar thing.

PS See, Mario, I told you I'd be watching.

@ Jeanne - you'e gotta love those Nike ads ... my mother used to always say that she said "just do it" before nike ever did lol.

Homework: Well just finished a book but he following are my recent pick-ups that are on my immediate to read list -

- Death Masks by Jim Butcher
- Flight of the Nighthawks by Raymond E. Feist
- Into a Dark Realm by Raymodn E. Feist
- Making Money by Terry Pratchett
- The Serpant Bride by Sara Douglass
- Cybele's Secret by Juliet Marillier (I ADORE her)

Nice reading list. Wish I had more time to get into mine.

Sitting in the hotel waiting for the coffee--but the wireless thing is cool. Today-- a full day of writing!

I love this place--

NON RESOLUTION:
-Not giving up smoking until I damn well feel like it.

Vamprowler said: -Not giving up smoking until I damn well feel like it.

It's the only way you'll REALLY quit!