I was busy this past holiday, writing and, thankfully, reading. 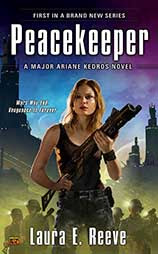 Last Saturday, fellow author, Laura Reeve, had a signing of her debut novel, Peacekeeper. Before she wrote science fiction thrillers, Laura was a missile officer in the US Air Force (with her finger on the nuclear trigger). 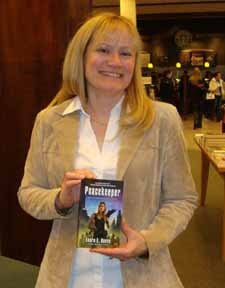 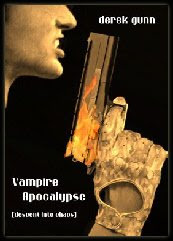 I'm a contributing editor for the International Thriller Writers. Check out what I wrote for Irish author, Derek Gunn, and his new novel, Vampire Apocalypse:Descent into Chaos, in the January issue of The Big Thrill. An excerpt of my review:

"Derek Gunn didn't reinvent the vampire novel. Instead he stripped it back to its roots, in the process tearing away the pretensions other writers have used to humanize the fabled bloodsucking monster. His books are not comforting paranormal romances; they are violent and visceral supernatural thrillers." 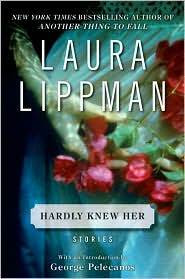 When you go to writer conferences, you get a lot of free books. At the last BoucherCon, I got this freebie by Laura Lippman (naturally, since Baltimore is Lippman's home town). Hardly Knew Her is a collection of Lippman's short stories. Each is a gem. Each is written with Lippman's sharp eye and crystal prose. And each is a tale of cold-blooded murder, usually centered around revenge. There's a woman drive to bankruptcy by an unscrupulous ex, a matronly femme fatale who is seriously underestimated by a pornographer, and an opportunistic girl who solves her weight problem with cocaine and murder.

Ask me about one of my favorite reads and I'll tell you, Michael Connelly's The Lincoln Lawyer. Connelly's written a sequel, The Brass Verdict. I wasn't crazy about the title until I got to the end of the book. The title makes total sense. Criminal defense lawyer, Mickey Haller, is on the rebound after a drug addiction and letting his personal and professional life unravel to tatters. A colleague is shot dead and Haller is assigned his clients, including a ruthless Hollywood mogul accused of murder. The street-wise Haller finds out he's the fall guy in a gruesome conspiracy.

Alert!
We all know that Jeanne Stein has a major Joss Whedon crush. So I'm scamming the Whedon news by telling you all that his Dr. Horrible Sing-Along blog was noted by National Public Radio as the most innovative and best media program for 2008. Points, Mario.

Homework: Share what books you've read recently or are on your TBR pile.  ¶ posted by Mario Acevedo @ 5:36 PM

Comments:
Am finally reading Jeanne's The Becoming. Yes, it's taken me a long time to get to it, but I plan to read the next three in the series straight after.

So far in 2009 I've completed Rachel Vincent's Rogue and Kelley Armstrong's The Summoning - both wow!

December was a banner month for reading for me, being off work for two whole weeks. December was also uncharacteristically fangy for me and I'm sick to death of Vampire Bill though I'm a little intrigued by Eric. I'm kind of intrigued at the notion of a back-to-roots vampire story and might have to give that a try to cleanse my reading palate.

Next up on my TBR pile (no particular order):

I see by your reading list why Bill the vampire lost his shine.

And Tez, no tossers allowed on this blog, so you know.

Yes it was Extreme Sookie month on my villa but that's the way I tend to read -- grabbing hold of a reader and reading everything they have.

I read three Felix novels in the span of two weeks.

I just finished Jeanne's latest, which was as awesome as the previous novels, and now working on Marta Acosta's latest. I have Mario's latest to buy next so I can sink my fangs into that! I'm faithfully devoted to these three fabulous authors.

Wow everyone has been doing some serious reading!

In the past fewweeks I've been a little less busy but have currned out the following:

A rather measly showing, but I'll do better I promise :) Unlike Gina I WISH I could just devour one author all at once, but as I largely rely on used bookstores for my reading suggestions (The hey! What's this?! syndrome) it's not really possible to just rip though one author's entire works unless 1) like Stephen Lawhead or Raymond E. Feist I pretty much own everything they've written since I've read them for forever OR 2) they are an author that never is on the used book shelves so I get the mass markets as they come out. Jeanne, you save me a step b/c I got the first two used and the last two came out in Mass Market so I didn't have to wait a year +!

Mario, It's nice to see you suggest some reads with the good ole fashioned "I'm not romantic and will rip you to shreds" type vampire. I've put Derek Gunn on my "to look for" list. Romantic vampire are awesome, but every once in a while you just want senseless bloodshed ... you know, after all it's fantasy. I think I just got my "chick card" revoked for saying that.

*churned .... I CHURNED out the following. I swear I proof read this time too!