Wednesday, December 24, 2008
I hope you’re all tucked safe and warm in your homes today—here in Colorado it’s cold and snow threatens and while that is the Christmas ideal, it reads better than it lives.

Anyway, here’s the lowdown for this week—

And another teaser for Dollhouse along with soothing words that all is well with production.

Something fun--Lock picking (for crimewriters ONLY, you understand)and here. These are sites you can easily lose yourselves in so don't go exploring when you have cookies in the oven.

Book stuff: Another note about J.K. Rowling's The Tales of Beedle the Bard. It is now the fastest-selling title of 2008. Reuters reported that "more than 2.6 million copies sold worldwide in less than two weeks."

Proceeds from sales of the book, which has a global print run of eight million copies, will go to the Children's High Level Group (CHLG), a charity for vulnerable children in Eastern Europe co-founded by Rowling. 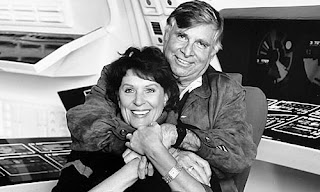 A sad note—Gina was the first to alert me to this. Majel Barrett Roddenberry, the widow of "Star Trek" creator Gene Roddenberry and an actress whose longtime association with the "Star Trek" franchise included playing Nurse Christine Chapel in the original series, died early Thursday morning. She was 76. From the LA Times:

She played the minor role of Nurse Chapel when the series began airing on NBC in September 1966. Roddenberry had another distinction: Beginning with the original series, she supplied the coolly detached voice of the USS Enterprise's computer -- something she did on the various "Star Trek" series.

Speaking of the Final Frontier: LA Weekly picks Top Five Space Cowboys from TV and Film. Guess who is #1!

Comments:
Well, bless LA Weekly's pointy craniums! I love Mal and they are brilliant and wise to choose him as #1.
I am waiting for the 80% chance of snow that was promised yesterday on my blog sidebar and on noaa.gov. It was weird to look at my weather sites that it was indeed snowing and in reality watching the sunshine over the foothills in Boulder. The snow would be okay, so long as I don't have to get out in it much with the drivers who have moved here from non-snowing locales.....
Listening to a Fringe episode on hulu.com as I type this. I really want to get this on DVD. This one is 'Dreamscape' and has to do with toads that secrete hallucinogenic (sp?) liquid.....it's a good one.

Hey Vickie-- I'm looking outside now, too, and it's blue skies. But it is cold and the wind cuts right through you.

I haven't watched Fringe yet-- just the first episode and I got sidetracked. I'll have to give it another try.

Jeanne: Finished THE BECOMING this afternoon. Firt, thank you for setting the series in San Diego, one of my top favorite cities. Second, thank you for writing a good kick-aith character like Anna.

Thank you, Vickie, for your kind words. I'm so glad you like Anna as much as I do.

Hope everyone had a wonderful holiday. I guess now it's back to work--

Comforting words about Dollhouse are good to see! I'm off to see the new teaser as soon as this is written.

I hope that everyone had a lovely Christmas and has a very blessed new year.