What is the old saying about people dying in threes? Last week, Tony Hillerman. This week Studs Terkel and Michael Crichton.

From Shelf Awareness and the NYT:

NYT Obit: Studs Terkel, a Pulitzer Prize-winning author whose searching interviews with ordinary Americans helped establish oral history as a serious genre, and who for decades was the voluble host of a popular radio show in Chicago, died Friday at his home there. He was 96.

Michael Crichton, who died on Tuesday at the age of 66, was like a character in a Michael Crichton novel. He was unusually tall (6 feet 7 inches), strikingly handsome and encyclopedically well informed about everything from dinosaurs to medieval banquet halls to nanotechnology. As a writer he was a kind of cyborg, tirelessly turning out novels that were intricately engineered entertainment systems. No one — except possibly Mr. Crichton himself — ever confused them with great literature, but very few readers who started a Crichton novel ever put it down.

I think the first Crichton novel I read was Coma. Scared the shit out of me.

Something fun: a link to a "literary witches" quiz.

If you're into Danielle Steele, she's blogging now. Check it out here. 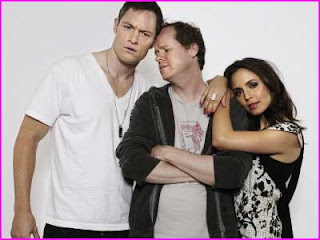 And, from my Georgia friend, Carol Malcolm, this treat-- a Dollhouse trailer.

Comments:
I'm still feeling the effects of too much Southern Comfort during my election celebrating. WAAYYY too much drinking.

And falling behind in my NaNo WriMo writing. Facing the hard truth that I'm not one of those writers who can sit down and just write, I need to outline first. Meandering around in character development instead of plot. Maybe it's the Southern Comfort.

Sad news about our three losses to the writing world this week.

Thanks for the cranium's up trailer for Dollhouse. I cannot wait for this!
Now off to see how much literary witch knowledge I have....

Gina--I'm with you about NaNo. Although I have managed to write about 3500 words on the new book, it's a far cry from where I should be if I was serious. My problem is I can't stop editing myself as I go along.

Vickie-- I'm so excited about Dollhouse. I'm almost afraid, you know what I mean? ;-)

How'd you do on the quiz?

I was really sad to hear about Crichton .. what a loss for the SF world! As for Doll house did you hear that the starting date has been pushed back? Now we must wait until February to see it. I'm excited as ever for a new Joss show (with Eliza nonetheless) but having a date pushback already cannot be a good sign.

Leia, I hadn't heard that. You're right, it does not bode well, damn it!

Jeanne: I know exactly what you mean! I'm afraid to look forward to it and have it disappoint, though I can't see how. I am afraid of liking it too much and watch it get cancelled.