No, not because of the sliding stock market.

No, not because the economy is in such a mess.

No, not even because I don’t like either presidential candidate and can’t decide who to vote for.

No. It’s a black day because today I removed the lightweight spread from my bed and replaced it with a comforter….

Means the nights are cold. Winter is right around the corner.

Back to the regularly scheduled program.

Another banned book display courtesy of Shelf Awareness. This one at the Twin Hickory Public Library in Glen Allen, VA. “Matt Phillips, a librarian at the…library, and his daughter Sydney read Where's Waldo by Martin Handford (No. 88 on the ALA's top 100 banned and challenged books 1990-2000) in the library's Banned Books Weeks window.”

From Forbes—annual estimates of what the ten most successful authors’ earned from June 2007 to June 2008:

On October 29, Mario, Linda Hilburn and I are doing a program at the Highlands Ranch Douglas County Library: Fang You Very Much - Vampire Authors Go For The Neck. It’s free, but advance registration is required. If you’re in the area, here’s the link to register. I can promise fun and prizes… Maybe even a devil duck.

Speaking of Linda, the second in her Vampire Shrink series is out…Dark Harvest. Check it out. 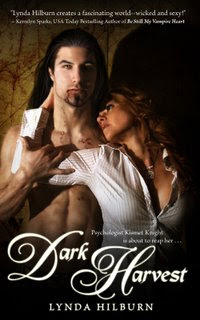 Linda and I participated in AuthorFest last weekend in Manitou Springs. We were on a panel with Esri Rose whose book, Bound to Love Her, was recently released. 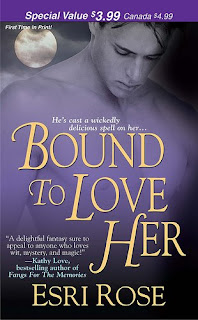 AuthorFest is a small but enthusiastically attended con that managed to attract a NYT bestselling author, Margaret Coel, to be its keynote speaker. Margaret, as always, was gracious and funny and entertaining. Her newest book, Blood Memory, is a standalone, but she’s best known for the Wind River Father John and Vicky Holden series.

Let’s see—next up? MileHiCon in a couple of weeks.

Check out Richelle Mead’s blog entry for Oct. 4th…Seems we here in Team Denver have an infiltrator in Team Seattle. When she went to the podium to do her reading at a signing last weekend instead of her book, Succubus Dreams:

here's what she found: 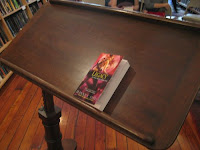 On a serious note, though, Richelle, I hope your dad is doing better. My thoughts are with you.

From my friend, Kris Bochum: Find out the reason that commands you to write; see whether it has spread its roots into the very depth of your heart; confess to yourself you would have to die if you were forbidden to write.
-- Rainer Maria Rilke

Comments:
Comforter = doona. I always have a doona on my bed, and another on the couch. Even in summer. Must be a comfort thing; I just don't feel right lying down or watching telly without my doona...

I probably need to grow up ;-)

Grow up? absolutely not! Comforter--doona--whatever gets you through the night!!!

I LOVE having the comforter on the bed! Cold weather means the nights are always perfect for sleeping. None of that, "Is it too warm for this bitty blanket? Is it too cold?" Manitou was fun!

God, I can't believe they had your book put out for that woman. Holy crap.

Esri said: God, I can't believe they had your book put out for that woman. Holy crap.

No, no, no... Don't get upset. Richelle wasn't. We're friends and while I don't know WHO did it, it's just a fun thing....we plug each other's stuff. She's a great writer with THREE series going. I'm in awe.

Interesting blog. Until about a week ago, I had no idea the paranormal romance genre was so big!

Hi Jennifer-- It is indeed. My books are classified Urban Fantasy rather than paranormal romance, though. The main difference is the romance (if there is one) is not the focus of the story. No "happily ever after."

Anyway, whatever tag it's given, the stories will hopefully capture your imagination!

Thanks for stopping by.