Wednesday, October 22, 2008
If you’ve followed this blog at all, you know that I’m a Buffybud—a follower (read devotee, true believer) of all things Joss Whedon. I even slip little references into my books, like this one of page 188 of Legacy:

It takes us exactly fifteen minutes to get back to the hotel, find Tamara’s bike and prepare to head out again. In the car I told her where we were going so I swing behind her on the Harley, watch while she slips on her helmet and ask if she has one for me. Now safety is not a concern for me. If we crashed, it’d take my landing on a wooden fence post to hurt me but there are helmet laws in California and getting stopped by a cop would be one more delay.

When I mention that to Tamara, she reaches into a saddlebag and hands me an orange knit cap, hand knit it appears, with head flaps. Along with a headset. “So we can talk on the way,” she says.

No kidding. I slip on the headset and adjust the microphone, eyeing the cap. “Jayne’s mom know you have this?”

Imagine my delight this week to discover Ma Cobb’s Hat Shoppe and this blog entry:

A friend of mine (Magie) is a huge James Marsters afficionado. She's met him several times at different conventions over the years, and she was planning to see him again at Atlanta's Dragon*Con in August. She decided that she wanted to commission a Jayne hat to give to him for his birthday, so I knit one up special just for him.... and here is the result. One of the MOST awesome pics that Magie could have sent me is this one of James Marsters in one of my Jayne hats.

For all of you readers who looked at me with a blank stare when I’ve read that passage at signings, here is a Jayne hat modeled by none other than James Marsters (or Spike to those of us who follow the canon.) 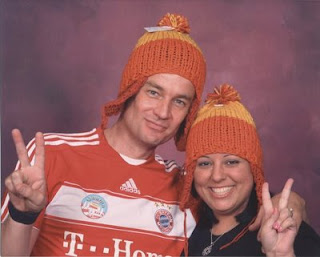 From my good friend Carol Malcolm—It looks like The Terminator—SCC will be renewed after all—at least the full season will be filmed.

From Shelf Awareness and MSN.com.

Cool Idea of the Day: human "books" on a variety of subjects. According to the Associated Press (via MSNBC), patrons of the Santa Monica, Calif., Public Library were encouraged last weekend to borrow one of 14 experts on hand for a 30-minute conversation. The library's hope was that participants would "learn something about the culture and beliefs of other people, erasing stereotypes in the process."

But there are rules: "The reader must return the book in the same mental and physical condition as borrowed. It is forbidden to cause damage to the book, tear out or bend pages, get food or drink spilled over the book or hurt her or his dignity in any other way."

Reassuring to the “living books” I’m sure.

Looking for us at MileHiCon this weekend? Here’s my schedule:

Note Mario’s first panel? Wonder how he was chosen for that? And if you really want a treat, be sure to catch Written in Blood—Mario and me together….double trouble.

PS Mario's Undead Kama Sutra is a Fresh Pick on Fresh Fiction...Check it out here.  ¶ posted by Jeanne Stein @ 6:36 AM

Comments:
When I read this, I remembered the reference to Jayne's hat after all (as well as what comes before and after). As soon as things slow down here I'm going to sit down with the others and find the other Whedon references. I clearly am not as detail oriented as I give myself credit for!

LOL-- Don't worry-- I have to go back and reread myself-- I'm always two books ahead of what just came out so frankly, i can't remember everything either!!