Thursday, October 16, 2008
Hi all—posted a day late to let bleary-eyed Mario get his blog done. When I saw him at Warren Hammond’s signing (see Mario’s post below), he looked beat (Mario, not Warren, who looked splendid.) A sure sign Mario had a good time at Bouchercon.

I picked this up last week—Terminator SCC TV series is all but canceled. But I’ve heard other stuff since then that it’s been given the green light to film a few more episodes. Maybe all is not lost. I like this season so much better than last.

BSP: a link from Mysterious Galaxy in San Diego. Guess which book was Numero Uno for September? Legacy! Thanks to all who attended the signing and bought books before, during and after. 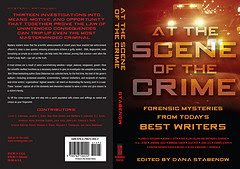 November 3 is the release date for At The Scene of the Crime—an anthology with a CSI theme described thusly on Amazon:

With the long-term success of procedural shows dominating prime-time television, the readership for a forensic anthology extends well beyond traditional mystery readers.

About the Editor:
Dana Stabenow is the Edgar Award-winning writer of numerous mystery, science fiction, and thriller novels. Her most popular series are set in Alaska, where she grew up. She has edited other mystery anthologies such as Powers of Detection, Wild Crimes, and The Mysterious North. She has been named Artist of the Year by the governor of Alaska. She lives in Alaska. Please visit her at www.stabenow.com.

It’s my first published non-paranormal mystery story. Watch for it.

Coming up MileHiCon next week. Mario, Warren Hammond (one of our critique partners) and I will be featured on several panels. Looking forward to fun. If you're in Denver and attending, please stop by and say hello.  ¶ posted by Jeanne Stein @ 6:19 AM